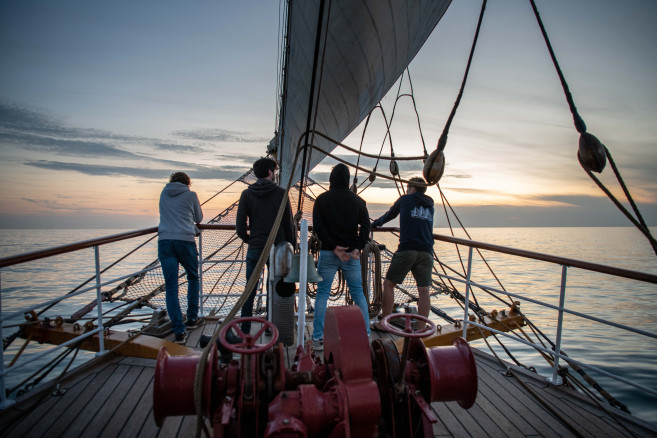 It's been a while. But at sea, life has such a different pace and rhythm that there is always very much and yet very little to tell.

It's been such smooth sailing that one could almost call it uneventful. Sails filling beautifully, easy winds from the good directions carrying us without too much annoyance as in heel or roll neatly towards the South South West.
We steer and coil, have lunch on deck. There is a word for it, I believe: Cruising.

On Tenerife we picked up our guests, crew and all the food for the big crossing to the Southern Hemisphere. Almost seven weeks at sea, to cover 60 degrees of latitude and almost 50° in longitude. In total more than five thousand nautical miles. Stops in between: probably none.

I know you landlubbers are wondering now, what does one do all that time on a ship with only ocean around? Once the sails are set, aren't we getting bored? You picture blue skies and seas, white sails? Us lounging in the sun shine, cocktails magically appearing at our side?

Let me set a few things right: Across the blue skies lies a veil of sandy haze. The sahara tints everything yellow, even 250 nautical miles off the African coast. The sun is a sharp round dial moving up and around behind that veil, at night the stars are trying hard to poke through.

As for boredom, I am sure both permanent and voyage crew can tell you, it is not foremost on our minds. In fact, it isn't on our minds at all.

The magic of the sea, for all the blue and white and starry nights, also comes with a special kind of magic. Things that were absolutely fine ashore and fully functional before departure tend to suddenly and without obvious reason stop working once land's end disappears out of sight. If the weather doesn't keep us busy, it is this.

It is well known to sailors that there is a seafaring folk responsible for all those pranks and naughty tricks played as soon as we leave shore. The Germans call them kobolt, the Dutch kabouter. The dictionary (yes, we do have dictionaries! no google here!) has no other translation than "gnome" but that does not quite hit the mark. Kobolts are little fairy folk, of the mischievous sort. They like to tease and prank.

The second you sit down to have a coffee, they would make a block squeak in the mast or something rattle. You get up to investigate, it stops. You sit down again, and there it is. They put knots and kinks into a line as soon as you turn your back. Tools, socks and notebooks dissappear and are found weeks later somewhere else. Hot water suddenly only runs cold. Big dessert spoons keep on popping up amongst the tiny  tea spoons. And so on. These pranks are as old as the ships themselves.

They weren't happy that we fixed it and turned to bombarding us with flying fish, on deck, instead.

We will see what they are up to next.

Meanwhile, all is well (for now) and we are flying towards Cape Verde.

Another 4500 miles to go to Puerto Madryn.

I would love to join you, but this post? This is the one that has me longing to be there. Beautiful telling of the magic of the sea and those curious enchanted pranksters.