During the night we actually did a bit more speed than we were thinking possible to do, so very early in the morning we were already entering the narrows and shallows of the Mc Farlane Strait, the channel between Livingston and Greenwich Islands. 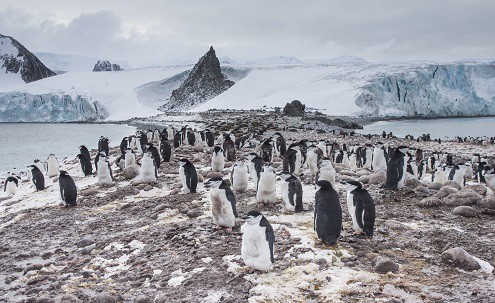 During breakfast we get through, leaving at our Starboard side the magnificent glaciers and high mountains of Livingston Island, while we head towards the South of Greenwich Island, where we plan to do our first activity ashore in Antarctica. The landingsite is called Yankee Harbour, and soon we sail into its a small glacial‐edged harbour, enclosed by a curved gravel spit. A large terraced beach area includes a melt‐pool to the east.
Beyond the beach, steep scree slopes rise to a rugged knife‐edge summit.

While ringing the three bells to gather everybody in the Deckhouse to give a briefing about the site, the crew finish the preparations to start operating with the zodiacs as soon as possible to go ashore. We land close to the north-east tip of the spit, on flat calm conditions. The guides show for the first time to the voyage crew, how to get inn and out of the zodiacs, and from then on we enjoyed the first encounter with the diverse wildlife of those Antarctic Islands. Our first steps in Antarctica were about to offer us a moment to remember all our lives, while we make our way along the gravel spit crowded with Fur seals roaring at us. Sometimes they actually bluff charge against us, while other individuals don’t react to our presence.

Many Gentoo penguins also inhabit Yankee Harbour, and we could see lots of fully fledged youngsters making their first seeps into the water, and closer to the more protected areas, sheltering from the wind, numerous adults were in different stages of their moulting. This process takes place every year when the breeding pairs finish growing their offspring, as the colder weather starts and hours of daylight diminish. Sarah guided this walk, leading the group along the beach, further from out pick up point, doing so she soon found a snoozing Weddell seal lying at the beach. When it was time to come back on board we all gathered close to an old typot, remaining here from the old sealing times of the 1820’s. Those steel big pots were used to render the blubber of the Elephant seals that they hunted in the area, shipping on board and back to Europe or
America just the oil.

Soon everybody was back in on board the old lady Europa, were we could enjoy our lunch at anchor in quiet waters for first time in the last days, after a rocky Drake Passage.
Right afterwards we heave anchor and start our way towards Fort Point, our next planned landingsite. The site is a quite exposed flat peninsula, with a glaciated area inland and spectacular rock cliffs over the sea, located East of Greenwich Island, and rarely visited due to the badly chartered soundings and its exposure to the wind and swell from the Bransfield Strait.

Once we motored the 6 nm from Yankee Harbour to Fort Point, we drop anchor at the SW side of the peninsula, and start getting ready for that special landing. We gear up in our warm and waterproof layers and take to the boats. The surge along the beach was pretty strong and our guides wear dry suits to help the zodiac manoeuvres of disembarkation and embarkation at the steep beach. And like this we head ashore, where we got the first experience on our trip of rough and wet landing. But once we got safely ashore and recover of the experience of the landfall itself, we are welcomed by spectacular surroundings and large amount of wildlife From the edge of the glaciers that cover Greenwich Island, a boulder bar reaches the sea, and at its end is surrounded by jagged spires of basalt, reaching over 100 meters in height.

Overwhelming site from the beginning to the end. Besides the breath taking surroundings, Fort Point holds an incredibly large population of Fur seals, using the area as a resting and moulting spot. Despite encountering so many of them during our landings, the actual breeding grounds for these species are mostly in South Georgia Island, with a colony of them that use Shirreff Point (North of Livingston Island) as well. The individuals that we saw were mostly males recovering energy after their stressful breeding period, and some immature, non breeders yet. The females with their pups are still in their traditional reproduction grounds. Also right at the landing site we find large colonies of Chinstrap and Gentoo Penguins, mostly moulting individuals and a few late chicks.

After gathering together around the only spot where we could actually find some space amongst all the wildlife, and between two penguin rockeries, we start walking inland along the peninsula, avoiding as much as possible the snoozing seals all around. Our first stop is at the end of the beach, at a short distance from an imposing calving glacier
front, before heading towards another remarkable geological rarity to visit. A nunatak” which the island’s glacier has flowed around and stranded like an island amid the field of ice. Some of us walked up the ring shaped corridor created between the rocky hill and the ice itself, formed by the heat retained on the dark rocks and melting the ice around them. After enjoying the extraordinary views over the whole Fort Point area from here, we make our way back to the each to embark the zodiacs again. Another wet adventure was waiting for us during the zodiac embarkation at the beach.

The whole Fort Point is a place of brutal unspoiled beauty, great scenery and rough conditions. From there we made our way to drop anchor at Half Moon Island, where we
plan to land in the morning, spending our first Antarctic night in a quiet anchorage.