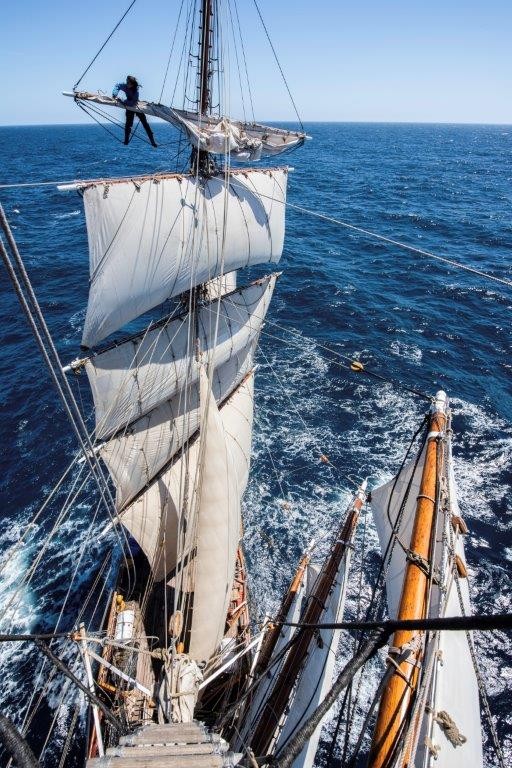 After the demanding last part of the journey, with plenty of wind, large swell, rain and water washing over the decks, today we woke up to a sunny and warm morning. It looked like we were about to have a lucky and quiet great day of sailing, but something on the wind force and our speed soon started telling another story. It didn’t take long to realise that we were fighting a strong current against us. A short research brought us to figure out the scenario we were about to deal with for the next few hours or even the rest of the day. To put ourselves in context and discuss the situation, we started
talking about the large scale ocean circulation patterns and the major Ocean Gyres, that are running clockwise around the centre of the oceanic basins in the Northern Hemisphere and anticlockwise in the Southern.

In addition to the oceanic gyres as global patterns of ocean circulation (comparable with the large climatic and atmospheric circulation cells at global scale), the different water masses in motion also interact with one another over much shorter periods of time and over much smaller areas. These smaller interactions are comparable in their behaviour with weather-scale processes in the atmosphere.

One of the most interesting interactions at this mesoscale happens in the frontal areas between two major circulation cells, creating eddys. There, when two opposite flowing currents collide, and both are carrying water masses of different characteristics, the denser water in the cold Falkland current on our case, dives beneath the water in the warm Brazilian current. At the same time some turbulence is produced, that can trigger an upward flow of nutrient rich waters from the ocean floor, helping the growth of plankton and with this enriching the base of the oceanic food web.

And today we found ourselves dealing with this mixing waters situation. Already from last night we were finding a discrepancy between the wind force we were experiencing and the slow speed we were getting out of it. In the early morning, under most of our canvas set and 20 to 22kn of WSW-ly winds we just could get approximately 3.5kn of speed. This inconvenient situation just got worse as the morning hours passed, and by midday, even though we add the Royals to the sail configuration, the seed dropped to 1kn and for a while even less. A quick reply to an email to our captain’s ashore provided us with a near real-time ocean current chart for the area. It revealed the reason for all our struggles to gain distance towards South Georgia Island. We were caught in the north flowing branch of a 70nm in diameter eddy, fully developed from the confluence area between the Brazilian and Falkland Currents. With an estimated current speed of above 3kn represented a formidable rival to sail against! Soon we realise that we need some help to get out of the widespread influence of this eddy. Engines roar for a few hours, while we adapt our sails and yards to the veering winds, blowing in the afternoon from a NNW-ly direction.

Keeping a course of about 135º meant sailing almost downwind, so with the help of many of us we change tack of the ship slightly to Port Tack, while striking most of the staysails and the Courses, and motorsail on that fashion, now luckily reaching speeds of about 6kn. During the next hours, as predicted, the wind increased and we could stop the engines. Before midnight we changed tack again and headed more southwards rolling our way sailing almost downwind, reaching good speeds between 8 to 9 kn.