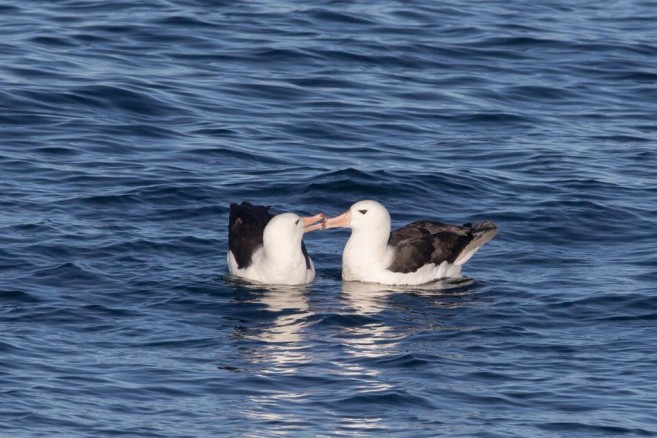 Calm day, with very light variable winds and flat seas. But as we could experience last night, we cannot trust this weather.

This second day on those latitudes over 40ºS, and already second warning during the night. From a full moon night and clear skies we ran into several squalls. We could see them approaching on the radar, so we got enough time to prepare ourselves. The squalls often come associated with rain and strong winds, so better be ready when one of those hits us. As we slowly sail we can see lightning all around, first on the horizon, later on much closer. We switch again to Squall preparation mode: Studding sails, that were set on starboard side, come down, and we start also taking away the highest staysails and squares, together with the Flying jib and the Gaff topsail. Courses are clued up and we brace from almost square to Starboard tack.

But the 40ºs just wanted to warn us again, showing their ferocious side but then when it comes the moment just leaving behind a bit of rain, but not really strong winds. Testing our capabilities to prepare the ship for when the moment comes when we run into serous squalls. In the early morning we sail into different weather, all looks much better, weather improves quickly and all sails are set again. With this course and wind conditions all seemed good to set again the Studding sails on Starboard side, and the crew soon is busy rigging sheets and halyards, but after coffee time, when all is ready to go, suddenly the wind veers to the SW, fortunately blowing just 10 to 12kn. Not the conditions for Studding sails, so we forget about them and brace sharp and start sailing close hauled.

We spend the rest of the morning enjoying calm seas, blue skies and sunshine trimming the sails and doing some jobs aloft, like changing some gaskets and doing rigging inspections. In the afternoon the wind died down even more and we mostly drift with almost all our canvas set, as the light airs veer to WSW, still keeping a SE-ly course, but after 16:00h the wind start faintly blowing from 310º and we change course again to a more proper SW-ly course.

Since we left Mar del Plata, and sadly had to say goodbye to Wim de Ridder and Wim Bolk, two South American terns joined the ship, and they been using the Europa as a mean to move southwards, a place to rest, clean themselves and as a fishing platform. Its been a few days that they are sailing with us, and from now on they were affectionate named as “the Wim’s”, in a way our friends still travel with us! And today they brought a new young fellow with them, and change perch to the Bowsprit, next to our shark fin.

With the calm winds and seas the albatrosses and petrels prefer to hang around the ship, not spending much energy flapping their wings and waiting, like we do, for an increase in the wind force. But today hundreds of them are around, including great numbers of Black browed albatrosses, from adults to young individuals, also a few Wandering and Royal albatrosses were spotted, accompanied by Cape, Wilson and Giant petrels, and a few Great shearwaters. As we slowly sail they sit in the water performing short flights following the ship. As we advance we create turbulence in the water bringing to surface plankton and other nutritious stuff. The majority of those birds feed on surface, and they are not really divers, as they fly scanning the surface for something to eat, once something is found they land and pick it up. That is one of the main reasons why ships should be very careful with the garbage and stuff that is being thrown overboard, because they catch anything that floats, including plastics that can obstruct their digestive systems.

Today was also a good day for whale spotting, and several species have been seen, starting in the morning with a couple of very active Sei whales, identifiable by their movements, size and big and tall dorsal fin; then a Southern right whale in the afternoon, showing its wide back lacking dorsal fin. This species is well known at these latitudes in the Argentinean coast, having a major breeding area in Peninsula Valdés. We finish the day with a group of between 4 to 6 Orcas, mostly mothers with calves. One of the adults even breached in the distance, not a very common sight.