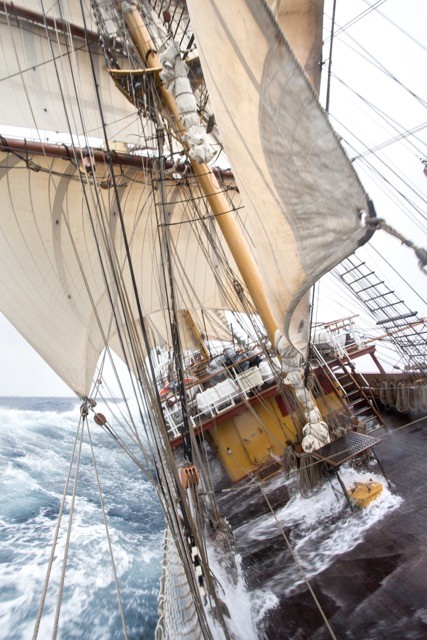 10th April 2016 SAILING THE SOUTHERN OCEAN towards Tristan da Cunha. All kinds of points of sail and wind situations during the day, for another journey of great sailing.

Early morning around 05:00 gybed to Port tack in decreasing winds from SSW down to 5 to 7kn. Slowly the day starts and with the sunrise we can see that it will be a partially cloudy morning with some sunshine and warmer weather, with a temperature of 10ºC, while the water keeps a stable 11ºC since it raised during yesterday. We Sail almost downwind at slow speed of 2-3kn on a 030º course, and setting the half starboard part of Main Course.

After breakfast we set the Main Skysail for the first time on our trip, and with it the rest of the canvas but the Gafff Top sail, like this Vlieger, Main Royal Staysail, Aap, Dekzwabber and Mizzen come up. By 09:00 all those sails are already set while the wind started to veer to the West and gradually increase, with our speed increasing accordingly as the weather is becoming cloudier.
After coffee time and while Jordi is repeating his talk on Phylogeography of Giant Kelp in Southern Chile, and its world distribution and colonization strategies, we brace sharp on Starboard
tack under NW-ly winds of 12 to 15kn, as the Europa seems to wake up and sails over at 6kn of speed again, on a direct course to Tristan da Cunha.

Other activities during the morning were in charge of the crew. Laurits talked about manoeuvring the ship under sail, explaining the idea and how to Tack, Gybe and Wear ship, followed by walks on deck refreshing the ropes and pinrail distribution. The talk is repeated in the afternoon by Katelin. Not many birds many birds are flying around us, but several Black browed
albatrosses were spotted and also an adult Wandering-Tristan albatross trying to glide and soar on the light winds that we are experiencing in the morning. In the afternoon the amount of birds around increased and some Yellow nosed albatrosses pay us a visit, accompanied by a few more Tristan albatrosses and Atlantic petrels.

As the day pass by, the wind steadily increases. The weather situation today is a bit different than the passed days, as now a relative Low Pressure system is located E of us, with a High one at our NW, giving us veering W and NW-ly winds. But there is a new Low coming from the W, pushing the High Pressure northwards, and creating a front that will pass over us during the evening and night, with most probably an increase on the wind regime and lower temperatures. Anyway we can still use those changing winds for a good sailing at least for the next hours,
making progress towards Tristan da Cunha. In the afternoon and for the next part of the day and night the wind kept increasing, blowing from the NW up to 24kn. In the meantime the
Barometer keeps dropping steadily while the Europa still flies at 7 to 9kn, even if we take away quite a lot of canvas. Royals, Top Gallants, Upper Staysails and Outer jib are packed, and the Fore Top Mast Staysail is changed for a Storm Sail. Later on, after dinner, the Top Gallant Staysails are also stowed away while Sara gives her first talk on History of Tristan da Cunha for al of us.

Other talks and activities on board today were the repetition of Jordi’s talk on Phylogeography of Giant Kelp, introducing some population genetics concepts and an abstract of his thesis. Then Aaron keeps going with his Navigation course, today with part 3, to be repeated tomorrow. Harko and Ruud keep Wheelhouse tours/sessions open. The amount of miles sailed during the last 24h had been of 133 on a straight track to Tristan. A bit less than yesterday due to the light airs that we had for several hours in the morning. As the conditions become rougher in the evening and night, with a cold front passing by and increasing swell, the lookouts are moved to the from the Fore to the Poop deck. For later, when the front passes, we expect another wind
change, coming back to the SW.

A full day of activities and with changing winds for great sailing. Starting with light breeze at breakfast time that steadily increased up to 30 knots in the night. We changed from Downwind, Broad reach and Beam sailing to brace sharp on Starboard Tack and sail Close Hauled.

full of envy for my friends on board andfxor all of you. Nothing quite like square rigger sailing.