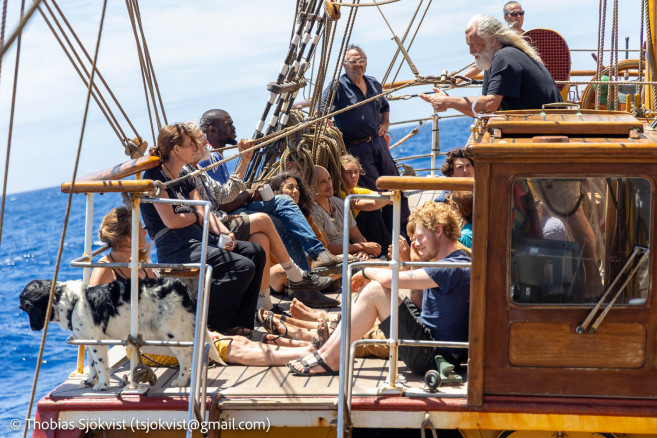 “Under Motor power” with the help of some fore & aft sails

26 days Out from Ascension

Wind =NE-erly 5 Bfrt.  Mostly overcast but some blue spots in the clouds are seen.

Third day on engines with some staysails.

Since yesterday afternoon we had to call back the lookouts from the bow because we were shipping a wave over the foredeck once in a while. The swell and the waves are sometimes working together and making steep waves.

This morning quarter to ten the call Land Ho came from the foremast and again it was Devon that gave the first sighting of land at 37Miles distance.

We hope to arrive in the end of the afternoon in Horta and it is not known yet if we can go alongside or dropping anchor just outside the harbour. But the silence of the engines will be welcomed in both options.

This afternoon we hope to see some wildlife closer to the coast, dolphins & whales are on the menu. But also the green colours of Faial are things we have to let our eyes get use to again after so much blue the last couple of weeks.

This afternoon we will have our last 2 o clocky with this permanent crew because quite a few are flying home from Horta, so the seven + dog that stay for the next leg to Harlingen are getting new faces in permanent crew and a complete new voyage crew to look out for.