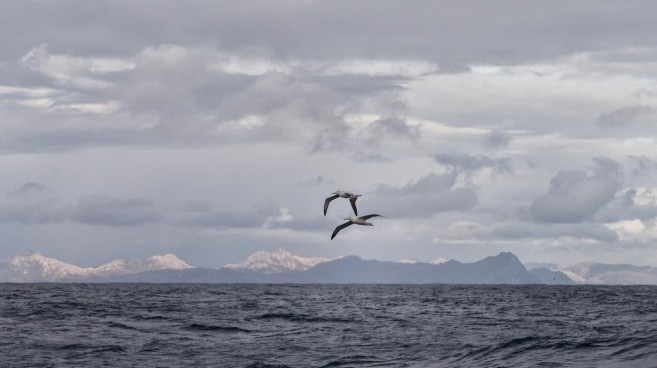 We are trying to go Northwest along the Chilean Coast, and ending up wearing ship and heading SSW, gaining distance to the coast and waiting for wind shift.

Squally weather again the whole day, with winds from the SW during the morning, as we sail on a NNW course. The numerous showers and wind shifts in direction and force kept us busy on deck for another day. Many times Royals, Outer jib, Middle staysails, Dekzwabber, Desmond and Gafftopsail have to come down just to be set again when the strong wind blows pass by, maintaining the watches on continuous standby and being called often on deck for sailhandling. In the morning we sail close hauled on Port tack, trying to keep 60º to the unstable wind, gaining distance to the NW, getting closer to our goal now, the Western entrance of the Straits of Magellan (Cabo Pilar), but also keeping in mind that besides going north, it’s a must not to get closer to the two faced, beautiful and hazardous coastline, here broken on hundreds of islands, rocks, shallows, not suitable for navigation.

Around lunchtime, and for a while afterwards, we pass through a calm situation, with fewer showers as we can see in the clouds around, less cumulus growing and more stratus higher up the sky. Time to set more sails, and get our tough old lady Europa to sail under full canvas again (but the Dekzwabber) after a few days with less sails set. Skysails, higher Staysails and Flying jib are unfurled and hoisted. Anyway the wind is not stable and several times increases its force for short periods, making us lower them and set them again afterwards. But during the afternoon, the wind starts veering towards the West and then Northwest during the night, time to wear ship again and head SSW, trying to get more distance from the rugged Chilean coastline. It’s not only the wind direction that makes it difficult for us. Along the coast runs a strong 1,2 up to 2 knots South-easterly running current all the time and that makes tacking up North more or less impossible for a square rigger. We just try to hold our position by tacking and hope for more favourable winds.

Sailing towards Cabo Pilar, the first safe entrance to interior Chilean waters along the South Pacific coast of Chilean Patagonia is showing itself as an arduous, and not at all a straight forward enterprise. Cape Horn rounding is resulting on a strenuous, backbreaking, logistically and sailingwise complex, but nevertheless exceptional and memorable sailing adventure. The trip would be a success rounding of the Horn if we can actually achieve reaching this Cape, the actual entrance of the Pacific side of Straits of Magellan, and from there sail Southwards to Punta Arenas. But again, easier said than done, and those last 100 nautical Miles to still sail northwards are not giving us any break. They are becoming very exigent on the crew, the sailing and route planning, given the unstable, variable and squally winds, and proximity of the ship to the jagged coastline.

In fact during the whole day we can see several of the offshore islands of those Chilean channels at our starboardside, as we head northwards. We pass by places like Rocas Torres and Noir Island, rarely visited due to their exposure to the Pacific winds and swell, but teeming with wildlife, home of South American fur seal colonies, Magellanic and Rockhopper penguins, Black browed and Grey headed albatrosses, amongst other species. During our navigation we could see an increase on the wildlife around, with many albatrosses, including the huge Royals and Wandering, the common on those waters Black-browed and the graceful Grey headed albatrosses. A flock of Sooty shearwaters was also spotted in the evening. Countless Giant petrels glide around the ship, and numerous Cape petrels and Southern fulmars are also throughout. As a new species for the trip, a group of Hourglass dolphins joined us for a while during the morning. This is the only species of dolphin as such that reach high latitudes, even Antarctic waters, but could also be seen sporadically all the way up to 45º S, always on temperate-cold waters.

Go Europa! May the weather gods be with you. You are all champions. We watch on with admiration and respect! Katrina and Russell

I follow your reports with great interest. That's breath taking because of the extrem weatherconditions in the southpacific near Tierra del Fuego, "el Fin del Mundo": "The Roaring Fifties"! I stand in awe for your performance. Good luck for the next hours on course to Cabo Pilar. Kind regerds Eckhard