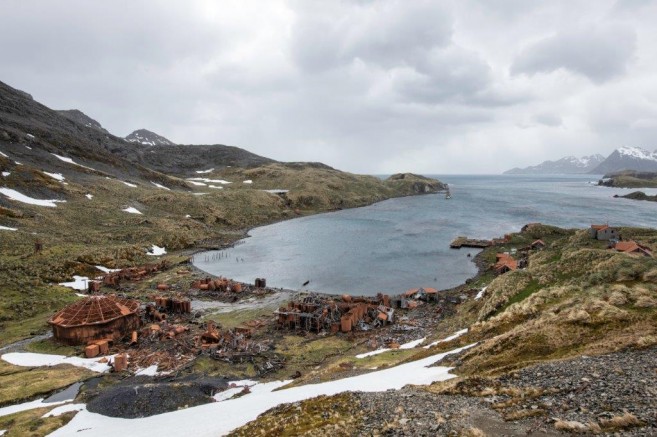 The plans for today were to start the day paying a visit to our second planned large King penguin colony. Yesterday we had to give up our attempts to land at the Right Whale Bay rookery due to heavy winds. Today the shores and tussock grass hills of Salisbury Plain were on the schedule. At the start of breakfast, Europa battled her way into the wide open Bay of Isles, where the surge and huge swells, fuelled by the vigorous gusty winds, batter the sandy beach of Salisbury Plain. Just a quick look outside or a short walk on deck is enough to make us realise the beautiful spectacle of the powerful South Georgia nature. Attempting a landfall in these fierce weather conditions is obviously out of question. It doesn’t take much longer than the time used for a sip of the first morning coffee for our mate Jelte and guides to decide continuing onwards and look for shelter and better chances to land somewhere else. The forecast for the whole day follows the same tendency as the last couple of days: strong winds and high seas. In no time, Europa makes her way downwind towards the mouth of Possession Bay, where the small and relatively protected cove of Prins Olav Harbour is located. There sure we will have better chances to at least try to launch the zodiacs and make our way ashore. This place is considered one of the best sheltered bays in the area, and was, as all sheltered anchorages, used intensively as a sealing and whaling site.
Today nevertheless, things worked differently… At first Europa tried to stand her ground using one anchor. This proved to be a worthless effort. Soon the anchor dragged under the loads of strong gusts. A second anchor is deployed but with similar results. The muddy bottom and the location of the anchorage, don’t allow for proper holding. Here the wind blows alternately from the two coves that shape Prins Olav Harbour, always catching the ship with her bow pointing the wrong way. The strong gusts (only 45 knots this time) ensured a laborious morning for the crew, obliged to reposition the ship and heave and drop anchors on several occasions.
In the meantime we were all brought ashore to spend a good morning hiking up the hills surrounding the Prins Olav Whaling Station. From a couple of high lookout spots up the hills we all had great views of its ruins but also we got an idea about its looks and structure. After going downhill to the landing beach, Europa, tired of anchoring, dragging, heaving, re-anchoring and dragging again,
approaches us while we are being picked up. From here we head deeper into Possession Bay, named as such because it is considered the place where Captain James Cook first set foot on the island, and took possession for Great Britain, naming it George Island, after King George III. It is unknown where exactly he first landed, but from the descriptions in his logbook, it might very well have been Prins Olav Harbour. Cook encountered the island on his 1772-1775 expedition with the Resolution, in search of the mythical Southern continent. He was most likely the first human to set foot on the island. The expedition mapped the island carefully – naming the Southern tip 'Cape disappointment' as they realised they had taken possession of an island, and not of the unknown Southern land. Some of us had similar feelings when we arrived and anchored under wind gusts over 50kn once more, and big swells breaking on the long beach. Even deep into the bay the conditions don’t allow for a landfall. Now we all put our hopes on a weather improvement for tomorrow, as the idea is to spend the day out in the field, walking the mythical Shackleton Hike, from Fortuna Bay to Stromness.