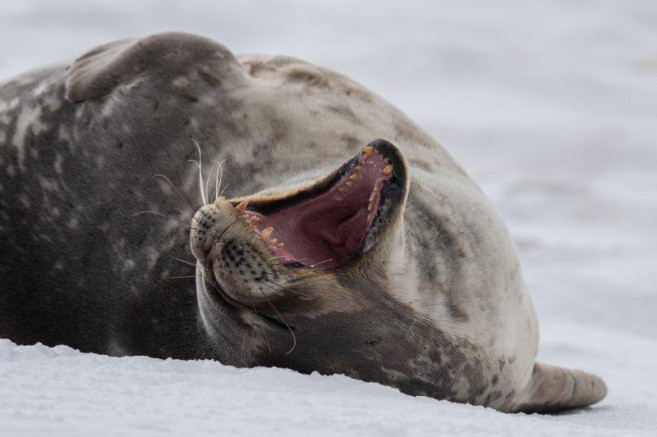 Captivated by the narrative
of stormy seas and adventures amidst gale driven swells that we had read
in various stories, the Europa's new crew expected to be greeted by
sailors of the swarthiest caliber and the roughest seas the 5 oceans had
to offer. While the sailors tight fit with our assumptions squarely,
this was heavily counterbalanced by sailing conditions which were
astronimically rare by virtue of the persistent sunshine and calm seas.
So unlikely were our 2.5 days 'Drake lake' conditions that we worried
Poseiden or some other eternal force or nature would right this
historical assymetry with conditions feocious enough to balance what
preceeded.  And so it was that our expectations were finally met when we
finally reached the mass of ominous grey cloud which until that point
had receeded from us in lockstep as we sailed to the Southeast. The
winds finally howled and the seas reared up in violent greeting of our
ship, finally we reached a Drake's Passage familiar to our imaginations.
This drastic change proved unsuitable to many of the crew and stomachs
were promptly and repeatedly emptied in a long overdue homage of bile to
the sea.
As mentioned this unlikely start was a counterpoint to the crew who
could best be described as archetypal. The Captain, a man who one
assumes at first glance was born on whitecaps is a veritable characature
of a sea captian with long nigh-on piratical hair covering his eternally
servicable sweater. His first mate, a man of assuredly scandinavian
decendent judging by height and Samson like hair, possesed the looks of
one also at sea long enough to acquire the unmistakable look of a life
long sailor. Various other crew members we've been lucky to sail with
are the (presumed but unconfirmed) outlaw frenchman who alleges to have
taken the lives of multiple disobedient crew - unspecified zodiac
misshaps being his weapon of choice; a galley staffed by efficient women
of high culinary talent in proportion to their Rappunzel-length hair;
various other trades are occupied by a Canadian who surely must have
jumped from his trade as a lumberjack or door-busting locksmith to
sailor; a fraueline whose perpetual smile lights up the boat and whose
beaming welcome was unforgettable; a no-nonsense Dutch girl who is both
capable and obviously determined that by voyages end we would have
learned some measure of her trade; an affable young South African of the
friendliest demeanor whose handiman skills matched the sociable
Scottsman he often shared tasks with; an Australian girl with a penchant
for rigging and terrifying (safely-harnessed) indoctrinees at great
heights, a Spanish researcher and general hand who helped with landings
in good grace and silent thoughts - and presumably analyzed diatoms or
the spectral properties of guano in her spare time; an accomplished and
talented Slovak photographer who I'm convinced was brought aboard as
much for his photography as for his sledgehammer fashion of disciplining
wayward landing party members who feel afoul of IAATO rules; possibly
the most pleasant Irish woman one could literally ever hope to find on
God's green Earth, and Jordy - presumably the second in command and
organizer extraordinaire who delivered most of the ship's lectures with
good humor and an insistence that every conceivable use of the term 'que
passa' be understood by attendees, and who habitually took easy routes
up mountain climbs only to lead uninitiated volunteers back down on the
most treacherous path one could possibly navigate while remaining among
the living. All in all, a group perfectly rounded out by tempor and
nautical inclination to lead us on our voyage to the  coldest continent
on Earth. One week in and this crew has delivered on every promise my
imagination freely made to myself before enlisting. What follows as we
leave our steaming moonscape of a shelter at Deception Island to begin
our controlled pitch and yaw through the Bransfield Straight will be
icing on the cake!

Ahh, the unmistakable prose of my protege. I live vicariously through these wonderfully complete descriptions of his adventure. Sail on!