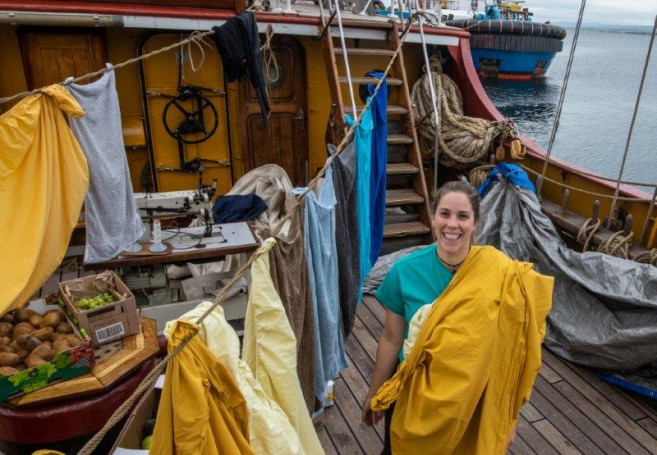 A couple of days ago, the Bark Europa arrived to Punta Arenas finding her moorings in the city main port amongst fishing and tourist ships. She just finished the Ocean Crossing that brought her here after starting in September from the Spanish southern shores, then passing by Montevideo on her way along the South American coast, just to make a detour to Falkland Islands where to have a break on the sailing and visit the bountiful nature of the islands.

After a few days there, she resumed her way to the Patagonian coasts until arrival to Punta Arenas.

All those trips together with the first part of the upcoming one, and then the future plans to sail into the Pacific Ocean once we finish the Antarctic season, lay into the frame of the 500 year celebrations of Ferdinand Magallan famed voyage, when he set sail in 1519 on an expedition that discovered the Strait that nowadays bears his name, being on that way the first Europeans to join the Atlantic and Pacific Oceans sailing through it. Their voyage, filled with adventures, including Magellan death, became the first one to circumnavigate the planet when one of the ship’s fleet under Sebastian Elcano’s command, returned back to Spain in 1522.

So far, since the start of Europa’s voyage across the Atlantic, she has already payed visits to several of the spots used by Magellan-Elcano expedition: Seville, Canary Islands, Cape Verde, Rio de La Plata and Punta Arenas amongst them. After departing on the 20th September 1519 from Sevilla, Canaries represented their first stop-over to board last provisions and get the fleet ready for the expedition set 5 centuries ago, to try to find a new commercial route with the Western Spices Islands. About three years later, on the 9th of July of 1522, the Victoria, only surviving ship from the five vessels that started the adventure, dropped anchor at Cape Verde Islands on her return way to Spain. With a decimated crew on board a battered ship, they carried on their holds a large cargo of spices that ended up covering the costs of the whole expedition once they arrived back to Sevilla on the 8th September of the same year.

Many hazards, deceptions and excitements were experienced by them, until Magellan could say loud that they finally discovered the channel that connects Atlantic and Pacific Oceans between mainland South America and Tierra del Fuego, by then not really known to be an Island. On their way they passed by in from of the coast that today is home for the Capital City of Southern Chilean Patagonia, Punta Arenas. Here is where we are about to start our trip, venturing into the frigid waters of the Chilean Channels and the quickly decreasing temperatures once sailing due South.

For three days the crew has been busy getting the ship ready for this new adventure: repairs had to be done in the rigging, Skysail masts and yards had to be lowered on deck, reducing the canvas that we just use in lighter winds than the bones we are about to encounter during the season in the high latitudes, sails had to be stitched and bended-on again, cabins and the rest of ship’s interiors called for a good clean, clothes had to be washed, food and drink supplies needed to be embarked, selected and stored properly. Time and combined effort of the permanent crew teams were necessary to get all those preliminaries done before enduring such a trip like the one we are about to start.

And then, after countless hours of crew hard work, Europa was ready to welcome the new Voyage Crew on board. Her decks will need a last scrub tomorrow before everybody embark, corridors and walls needed a last clean, together with the last touches aloft, but all her canvas is ready to face her first trip to Antarctica this season.