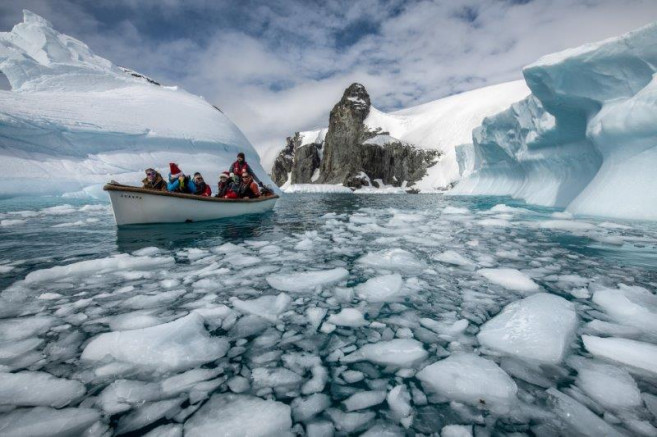 Early in the morning Europa heaves anchor from Whalers Bay and we make our way out of Port Foster though the only entrance to Deception Island, the spectacular Neptune’s Bellows. Once leaving Deception Island behind we face the open waters of the Bransfield Strait for a stretch of about 60nm towards our next spot for today’s activities, already along the coasts of the Antarctic Peninsula itself. Such a long sailing expanse is often characterised by rough seas and strong winds, but not today. Calm waters and light breeze welcome us for our morning sail. With not enough wind to set any canvas, we keep motoring in a South-easterly direction until breakfast time, when the breeze looks enough to set Lower Staysails, Spanker and Inner Jib to help on our progress. By mid morning our firsts spectacular icebergs are encountered, some of them being used by Chinstrap penguin groups to sit and take a rest on their foraging trips. Not much later the firsts cliffs and rocks from Trinity Island and the Antarctic Peninsula take a peek off the low clouds and foggy horizon. First look for us too of the Antarctic continent as such. Surely the same lands that were sighted for the very first time on December 1819 during Captain William Smith third voyage to the South Shetlands. On that voyage on board his ship the Williams, the commander Edward Bransfield was sent by the British Admiralty to confirm the existence of the islands Smith said had found previously. The expedition successfully landed at King George Island and sighted Deception Island, to the Southwest. From there, on January the 30th, 1820, on a clear day, they could see mountains in the horizon. They just discovered Trinity Peninsula, the first part of the Antarctic continent to be seen by man. The Strait that separates the South Shetland Islands from the Peninsula bears Bransfield’s name, and today, as it would have been by then, is home for stormy unpredictable weather, drifting icebergs from large glaciers all around, and Humpback whales that come here attracted by krill swarms that bloom in summer.

And indeed several of them have been spotted during the morning hours on our approach to the narrow channels between Spert and Trinity Islands, where we plan to cruise with our zodiacs. And here we link out trip with yet other early explorers of those forgotten lands, wrapping up the South Shetland Islands history and leaving way to the next wave of intrepid adventurers who dared to sail those icy waters. And can’t be on another manner than naming Nathaniel Palmer and his exploratory voyages in search of the precious seals. Following a first successful campaign, he set sail again Southbound in 1820, as captain of the ship Hero, part of a sealing expedition led by Benjamin Pendleton. With the mission of finding a safe harbour for the expedition’s five ships, he came across the entrance to the volcanic caldera located inside Deception Island, which we visited yesterday. Then the ship made her way across the Bransfield Strait, by that time though to be just a large embayment, toward Trinity Island, finding the way further South blocked by ice. Approximately the Europa follows their route during this morning, hoping for better success in her way South after cruising in Trinity. Forced by the icy conditions, Palmer then turned around and made it back to the South Shetlands, where he found a protected bay to use as a safe anchorage where to move the fleet, They met all there on November 23rd 1820, naming the place Yankee Harbour.

Precisely where we walked around a couple of days ago, and could see one of the pots used during those years to boil the seal blubber. But some of the places sighted during those early days of sealing and whaling voyages had to wait many more years to be officially charted or even given a name. For instance, Trinity Island and its neighbour Spert, where we dropped anchor before lunch under the snowy weather, were named by Nordenskjöld, leader of the Swedish Antarctic Expedition, 1901-04, that visited those Western Peninsula coasts before heading to the treacherous waters of the Weddell Sea.

Our intentions were to explore by our small boats the channels in-between both of them, usually crowded with icebergs and bergy bits, while the Europa holds her ground facing the high glacier fronts of Trinity. The waterways we head towards are what we call an iceberg graveyard, where drifting ice from the Bransfield Strait gets trapped on their shallows.

As we drive by, we stop to visit several Weddell seals snoozing on the lower slopes at either side of the entrance channel. Closer to the water Chinstrap, gentoos and a couple of Adelie penguins hang around as well.

Getting deeper into the several bays and channels, we had to find our way amongst beautiful icebergs of any size and shades of grey, white and blue, some of them being used by Weddell seals to snooze on. Dark basaltic cliffs loom above our heads on either side as we make our way through. And suddenly, just turning a corner around rocks and icebergs, we discover a Leopard seal resting on an ice floe. Swell and a bit of wind makes it difficult to have a good view, but spending some time in the area we all get the chance for as good picture of such magnificent animal. Having a close look we can all tell the difference between the different species we have seen during the trip so far.

Leopard seals have a longer body shape, huge head with the nostrils located on the upper part of their snout, big mouths and longer flippers. That makes them really graceful animals, and well armed for predation over penguin, fish and seal pups, but our guides explained us that approximately 50% of their diet is Krill, like almost all wildlife in Antarctica. Flying over our heads Kelp gulls, Skuas, Arctic terns and Cape petrels make their way back and forth from their nests on the cliffs or take a rest on top of the countless icebergs.

In the glacier fronts that cover both Spert and Trinity Islands, we can see darker ash layers from massive eruptions on Deception Island, thousands of years ago.

By the time we finish our cruises, the cold winds blow at about 20kn straight from the glaciers that surround us, time to look for our way through the ice maze to return on board to have an special and exotic Christmas dinner, with served aperitif followed by Kudu, Ostrich and Springbok meat brochettes, Mushroom Wellington made the night for the vegetarians.

Spending part of the night at anchor, we got the chance to celebrate Christmas night in the bar, while outside the sun sets over the icebergs and the winds pick up, making the anchor watches to have a close lookout at the screens in case we start dragging.

Among the bigger and smaller floating icebergs we have discovered the blue lagoon of the Antarctic; a small lake with an incredible turquoize colour formed between icebergs.