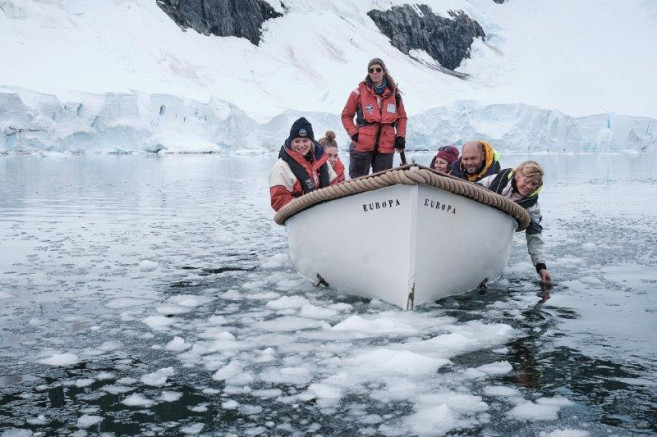 What about waking up in Paradise?

What about a different idea of a Paradise, this one being cold, icy, stuffed with high snowy mountains and dangerous glaciers?

Well, that’s what happened today. Europa had made her way overnight to this sheltered bay and by the early morning she lay gently drifting facing the high peaks and glacier fronts of the so called Paradise Harbour. In one of its smaller inner bays, Skontorp Cove, is where we plan our activities off the ship for the morning. This area offers excellent opportunities to enjoy its corners, glacier fronts, rock cliffs and multitude of icebergs, while zodiac cruising.

Both our rubber boats were launched after breakfast, together with our more traditional Sloop, and the morning exploration of the glaciated cove began. The glaciers around are rapidly changing and so they do the positions of their fronts in the charts, and of course nowadays are completely different from what the firsts explorers and surveyors of the area found here during the season of 1913-14. Many features around, including names of glaciers, peaks, channels, islands and peninsulas were named by the Scottish geologist David Ferguson during those years.

With our boats, we first head towards the proximity of the spectacular glacier fronts that surround the whole bay, tumbling down from peaks like Mount Inverleith, that with its 1495m in height towers over the head of Skontorp Cove. All this mountainous landscape almost perfectly mirror on the complete calm waters of Paradise Harbour.

The highest parts of the so called Avalanche Glacier, paid tribute to its name and offered an impressive snowslide that was close to reach the sea level but ended up a bit higher up over the crevasses of its tidewater front.

Looking upwards towards the sky we could see a ring of light encircling and extending outward from the sun, called a halo.

That only happens when thin, sheetlike high clouds named Cirrostratus cover the sky, being so thin that the sun or the moon can be seen through them. The ice crystals in these clouds bend the light passing through them often producing the halo effect. The most common type is the 22° halo—a ring of light 22° from the sun or moon. It forms when the light rays get refracted by tiny suspended column-type ice crystals (with diameters less than 20 micrometres) that become randomly oriented as air molecules constantly bump against them. The presence of that type of clouds often indicate a weather change, predicting rain or snow within twelve to twenty-four hours, especially if, as today, they are followed by lower clouds. But anyway, that would be for tomorrow, for the moment we kept cruising around on calm conditions, watching the impressive ice hanging towers, some of them barely holding still, sticking to the glacier fronts, and then making our way towards the small hook-shaped peninsula at the North side of the entrance to Skontorp Cove. Named Coughtrey Island when it was first discovered, it is actually a peninsula from mainland and home for the Almirante Brown Station, established by Argentina in 1949-50. From the boats we have a look at its buildings that at the beginning were used mainly as summer station, but after 1965 it started as a permanent scientific base until it was destroyed by fire on the 12th of April, 1984. Almirante Brown has seen some maintenance in recent years but hasn’t been in full operation for a long time. Gentoo penguins have long claimed it as a favourable nesting site.

Next to it, several huge and beautifully carved icebergs have drifted, and beyond them rise the high cliff of Shag Crag. With its 80m basaltic vertical fall, it represents a fitting nesting place for numerous Antarctic shags. Their nests cling on the narrow shelfs of the rocky wall, offering great views while drifting in front of them with our zodiacs. Leaving them feeding their chicks and preening each other, we make again our way through the icy waters towards the ship. While doing so, a Leopard seal is spotted resting on an ice floe, hardy noticing our approach. The cherry on the cake for this morning cruising in Paradise!

After that it was time for the most unconscious of us to try a Polar plunge in the freezing waters of Antarctica. Jumping off the ship, for some it was even difficult to climb the ladder back on board. And while still on our swimming suits lunch was called, today the weather conditions seem good enough to prepare the buffet on deck.

Afterwards, quite a long stretch was to be made during the afternoon, with the idea of dropping anchor at Port Lockroy in the evening and spend the night there.

Motoring for most of the way, we leave Paradise Harbour through the Ferguson Channel, that leads to the Gerlache Strait.

At the beginning there we found quiet and calm conditions, where in fact we expected some NE-ly winds. Without possibility for sailing we make progress under engine, until we are in the middle of the Strait, there a fair wind allowed to set Top sails, Inner Jib, Lower Staysails and Spanker. Again the Europa is under sail in Antarctic waters, though for not too long, as soon we start steering in headwinds into the southern entrance of another spectacular waterway that will lead us to Port Lockroy, the scenic Peltier Channel. A bit shorter than its big brother the Lemaire, it doesn’t fall much behind for its beauty. It separates Doumer and Wiencke Islands, the latter being the southernmost of the major islands of the Palmer Archipelago, lying between Anvers Island and the West coast of Antarctic Peninsula. Sure sighted since the early explorations in the area due to its spectacular jabbed peaks and steep glaciers that stands out above the surrounding islands in the Gerlache Strait, it was named by Gerlache himself after Auguste-Karl Wiencke, a seaman who lost his life on his 1897-99 expedition. But the 6nm of the Peltier Channel had to wait until Jean Baptiste Charcot sailed along it during his first expedition in 1903-05.

Narrow and tugged in-between glacier fronts and the alpine mountains of Wienke Island represents the most elegant way to get to the renowned Port Lockroy. And there we arrive and drop anchor in the impressive Back Bay, just surrounded once more by tall glacier fronts and with Goudier island, home of Port Lockroy Base, at our back.