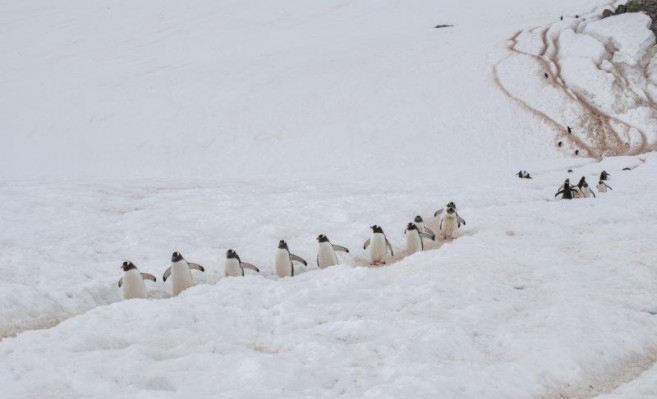 The day of our last landing in Antarctica has arrived. After spending a night on anchor in the Errera Channel we woke up to a rather gloomy day but with occasional sun rays breaking through the clouds. The channel is surrounded by steep mountains and glaciers of the Antarctic Peninsula and the large Range Island.

The peaks often disappeared in the clouds while occasional light pools illuminated the scenery in a way that would please any landscape photographer. Especially the nearby Cuverville Island appeared quite dramatic in this setting. Right after breakfast the guides did their landing briefing and left for landing site scouting. When finished they radioed back to Europa and we started the landing procedure. The water at the boulder and cobbles beach was a bit shallow with lots of rocks just awash but we all managed to land trouble free. The nearby snow covered slope at the background was crisscrossed with a number of penguin highways. On the beach itself lies a small piece of foundation block of the former British base founded in 1956 and dismantled in 1959. Following Antarctic Treaty agreements, any Station must be in use or at least maintained throughout the years, but must be dismantled if is not wanted anymore. That is what the British decided to do here. From there we again decided to split into two groups. One taking a more relaxing approach to the landing by staying on the beach with Richard while the other half went on a hike to the top of the nearby hill with Jordi and Claudia. The view from top of the hill was great, an excellent opportunity to get some last scenic shots of a truly Antarctic scenery. The light for photography was still great, although changing quickly. Up in the highest point a geodetical post from 1992 could be found, used in conjunction with other ones located nearby for triangulation of accurate positions for mapping and charting the area. The exploration of the hill top continued with a slope slide on the way down.

The group at the beach walked around the surroundings at leisure pace, eventually coming across four Weddell seals resting on the snow. They must have done some dives recently as they didn’t mind our presence at all. We could hear their deep breath. There was also a textbook example of a penguin highway area, coming down from mountain is several streams and a bit closer to the sea the highways branched into something that looked like meandering river. Quite a few Gentoos constantly climbed or walked down the highway.

The morning outing ended just before noon. We all transferred back to Europa, heaved the zodiacs up to the sloopdeck and cleaned the main deck as we usually do after each landing. A random snowy sheatbill landed on the grey zodiac and started to nib the belts that held it in place. After the bird got bored with it, flew away still giving us enough time to take some photographs.

Heaving anchor we head to cross the Gerlache Strait on a general direction towards the West, to get into the Schoallert channel separating large Brabant and Anvers Islands and leading to Dallmann Bay.

We leave the snow-capped Anvers at our Portside, with its glacier fronts calving in the sea, coming from the ice cap that covers the huge island. The first views of it date back to 1832, when Biscoe landed here during his sealing trips in the southern latitudes. He also claimed to have sighted mainland Antarctica, but this affirmation has been always been under discussion.

Nevertheless he named the faraway lands he spotted as “Graham Land” that until nowadays refers to the northern region of the Peninsula. Searching for seals they discovered large stretches of coastline and his Expedition during 1830 to 1833 ended up becoming the third one in circumnavigate the continent. Biscoe didn’t even know that Anvers was an island and it was not until 1898 when it’s insularity was proved during Gerlache Belgian Antarctic Expedition. Then he named it after the city of “Antwerp” who was one of his sponsors.

At our Starboard, the cliffs and glaciated peaks of Brabant Island can be seen through the low clouds. Its existence was well known for the early sealers but the first official landing on it was made by Gerlache and his men who then named the island Ile Brabant after the Belgian province Brabant, which also contributed to the cost of the expedition.

And just when motoring through the channel that separate those islands, a group of Orcas was spotted. About 20 individuals seem to be feeding in small groups here and there, distributing their efforts over a large area. Busy feeding as they seem to be, they don’t show any curiosity for our ship, so we decide to try to approach a group and stop the engines, drifting around to enjoy the sights. Even though they were at a bit of distance, we could clearly identify the group as Type “B" , considered the most common around the coastal waters of the Antarctic Peninsula, just like the ones we spotted a few days ago. Globally, Killer whales present a diverse range of sizes and colour patterns, which numerous of the so called “ecotypes” or forms that are physically and ecologically distinct, as well as genetically representatives of different populations. In spite of that, some consider that the genetic differences amongst some of them could be indicator of even several different species. For example the ecotypes A,B,C,D are recognised in the Southern Ocean, all of them having distinct habitats, feeding preferences and physical characteristics, but they rarely interbreed. On top of that, clearly different behavioural traits, all together would indicate some evidence of separate species. But Orcas are social cetaceans, intelligent as well, and animals that apparently can choose not to interbreed with other types.

That we still have to base our knowledge of such charismatic cetaceans on some speculations and hypothesis is just an example to help us realise how little we know about our Oceans and the species that inhabit in them.

However, an encounter like thist always arises excitement and many enjoyed the distant Orcas from deck for about an hour. What a treat for the last hours of this year, and what a way for starting to welcome 2020, as many did if we have in mind the different time zones of our home countries, with us being from all over, from Australia all the way to North America.

Then we resume our way after having manoeuvred and drifted all together almost back in to the Gerlache Strait. The anchorage we chose to spend the night of new year’s eve was still a few miles away, and it was time to make our way there, on the Eastern Melchior Islands, where the anchor goes down past dinner time.

Despite the several celebrations during the day, many spent time in the deckhouse having fun until officially it was midnight in the Antarctic Peninsula, when all crew came on deck as well, together with all of us to wish everybody a happy and prosperous new year, with a glass of champagne on our hands, a smile on our faces and a warm heart despite the drizzle and cold temperature.