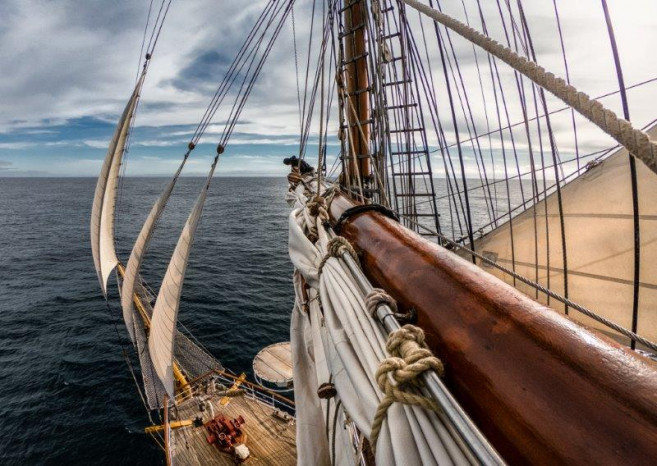 Departing at about 20:00h from Puerto Williams, Europa resumes her way Eastwards along the Beagle Channel, and in the night she is already heading South through the passage named Paso Goree, between the little archipelago formed by the Picton, Nueva and Lennox Islands and the larger Navarino Island. With the plan to reach Cape Horn by breakfast-time. Those three islands, as small and of little importance as they appear to be, they have played an important role along the historical times in the relations between Chile and Argentina in Patagonia. Picton was found first by Robert Fitzroy on board the Beagle, who named it in honour of Thomas Picton, first British governor of Trinidad in the West-Indies. Lennox was discovered 1624 by Dutch Admiral Schapenham. Territorial claims had to wait to be solved until Chileans and Argentineans signed in 1881 the so called “Boundary Treaty”, where those lands were considered to belong to Chile. This unstable balance tipped by 1904 when Argentina claimed sovereignty over them. Their interests were related with strategical reasons. Who control the islands can ask for territorial and maritime rights further into the Atlantic Continental Shelfs, rich on mineral resources and fisheries. These disputes lasted for many years under the arbitration of the United Kingdom, until 1978 when Argentina decide to go to war with Chile over them. an action that was aborted just a few hours later after the arbitration of the Pope of the catholic church. Nevertheless, in the middle of the political instability, the decision was taken by the Chilean Navy to install minefields in strategic places of the whole Cape Horn archipelago. Same minefields that nowadays, and since the year 2007, have been in process of removal, some of them still buried in Cape Horn itself not so long ago, which at the present and after an arduous job is considered mine-free. But the Argentinean hostilities didn’t end yet by then, as the idea after their invasion of Falkland Islands on 2nd April 1982, was to re-take the bellicose claims over Cape Horn Archipelago as well. Thing that made for the Chilean navy to install even more minefields in all the Southern Patagonia area.

Fortunately on one hand, this sure has helped for years to keep those areas pristine. But very sad and unfortunate on the other hand that part of it has to be related with human greed and war. Not just Geopolitics have helped to the nature conservation of this world’s end, but also its isolation, inaccessibility, foul weather,, large swells and strong winds, making for extremely harsh living conditions. Leaving aside the quarrels between Chile and Argentina for those lands, the whole archipelago, and Cape Horn itself was discovered by the Dutch Captains Schouten and LeMaire on January 29th 1616. They decided to give the most southern point of the Tierra del Fuego the name of their hometown Hoorn, in the Netherlands.

1602 onwards. It was also the world's first multinational megacorporation, possessing quasi-governmental powers and acting under the wing of the Dutch Crown.

Amongst the rebellious merchants, desirous of fitting out ships and making discoveries and business at their own cost, was Isaac Le Maire, from Amsterdam, who proposed to the connoisseur of the trade and great navigator William Cornelison Schouten of Hoorn, whether it would possible to find a passage to the East Indies into the South Sea. For that he thought on his son to sail together with Schouten and equipped two vessels to sail from Holland, the Eendracht, and the smaller Hoorn. The latter one was lost during the sailing, but between the 29th and 31st of January 1616, Schouten and Lemaire on board the Eendracht were fully assured of having the way open into the South Sea, passing the newly discovered Cape Hoorn and losing sight of land altogether. At the time it was discovered, the Horn was believed to be the southernmost point of Tierra del Fuego; the unpredictable violence of weather and sea conditions in the Drake Passage made exploration difficult, and it was in 1624 that the Horn was discovered to be an Island.

And such legendary place was about to be our last outing off the ship and last sight of land before reaching Antartica in a handful of days. At our arrival to the south-eastern shores of the island, where we dropped anchor during breakfast, we could feel that today, the Horn was most probably going to allow us for a relatively easy landing. Its treacherous weather, swell and their sudden changes don’t make for anybody to trust a place with such reputation as the Horn, so our guides suit up in dry-suits to better manage the boats ashore and for a safer disembarkation. And soon it was time for us to join them ashore at the so called Caleta León, the small rocky beach where most landings happen here. That cove represents the starting point of the stairs and boardwalk that lead to the legendary lighthouse and to the famous albatross monument, both being the highlight places to visit during the landing. During the time ashore in Cape Horn we will all have to follow the boardwalk, due mostly to nature conservation purposes of the fragile ecosystem.

As we all were getting off the zodiacs and excited as we were to set foot in the emblematic island, Ariel, the Navy Officer that will be in charge of the lighthouse and ship’s traffic control in the area welcomed us and lead the group straight up the wooden stairs the climb the steep cliffs to the top flat area of the island. Every year the Chilean Navy posts a family here, as well as in other 10 strategic pathways along the Chilean Channels. Usually, as it is on this case, they can spend about 12 months in relative isolation with their wives and kids, eventually pets such as dogs are also allowed. Following the path, a bit further in we could choose between going either to the lighthouse and their accommodations, or to the renown Albatross monument, swapping locations afterwards we could all enjoy the whole area permitted to visitors. The monument was erected in 1992 by the Chilean branch of the Cap Hornier Society, since then becoming a symbol of Cape Horn, together with the poem by the writer Sara Vial that accompanies the memorial: “I am the albatross that waits for you at the end of the Earth. I am the forgotten soul of the dead sailors who crossed Cape Horn from all the seas of the world. But they did not die in the furious waves. Today they fly in my wings to eternity in the last trough

of the Antarctic wind.” Cape Horn dangers are numerous and infamous, making it one of the most hazardous navigation passages elsewhere, many ships wrecked in the area and countless sailors lost their lives along the historical times.

Besides being a challenging sail around for adventurous sailors and modern races, in the 18th century and until not so long ago it was part of the shipping routes carrying a high percentage of all world’s trade. Known as the Clipper Routes, sturdy cargo sailing-vessels departed from Australia back to Europe, while others like the well-known German steel-hulled Flying P-Liners operating since the 1890s, specialised on establishing a competent Nitrate trading connection between north of Europe and the Pacific coasts of South America. Despite the battering they suffered often around the Horn, none of them was lost here.

Such reputation is well deserved, as its latitude, just about 56ºS is well into the wild Furious 50’s, where the fierce W-ly winds and currents are funnelled between the tip of the Americas and the Antarctic Peninsula. The strong winds sweeping over the seas rise large waves, uninterrupted by any landmass around the Southern Ocean, until encountering the shallow waters around the Horn, growing steeper and shorter and thus increasing the navigational hazards.

But not today. Luckily for us, seas, weather and winds seem to have an agreement to take a rest for a couple of days, allowing for good visits ashore and easy sailing the area.

Cape Horn is not just the dreamed crossing … or the worst nightmare… for sailors, but also represents a highlight on the conservation of the subantarctic biodiversity at a worldwide level. Here grow the southernmost forests on earth, right where two different oceanographic systems meet, the Atlantic and Pacific. Large and diverse Kelp forests grow in the seas while on land we can find an incredible amount of non-vascular plants (bryophytes, lichens and moss carpet). Terrestrial and Sea birds are spread along all the area, and if we listen carefully the roars of Sea Lions could be heard down below the cliffs in small colonies spread over the rocky shores. All an all, the whole of Cape Horn area, from the Cape itself to the Southern shores of Straits of Magellan constitutes an important biogeographical highlight. This was noted by the researchers from the University of Magellan not so long ago and the area was declared Biosphere Reserve in 2006.

Soaking into the wilderness of Cape Horn and visiting its infrastructure we spent a good couple of hours, before embarking the boats again to come back on board for lunch, ready for starting our crossing of the also legendary Drake Passage towards Antarctica. Last preparations of the ship have been made and pilots have disembarked while we were ashore, and now, without delay the anchor was heaved and we head South towards upcoming sailing adventures.

Light breeze blows from the SSE, making for the use of some of our canvas plus the engines. Time to put in practice some of the concepts and skills learned during the last days during our training and lessons, as the permanent crew asked for hands to climb aloft, unfurl and then set the Jibs, Lower and Middle Staysails, Spanker and Gaff Top sail.

There was time as well in the afternoon for crew members to further introduce us to the rig and sails, their names and the functions of the myriad of lines that hang over our heads from aloft. Safety lines and nets were rigged on all our decks taking advantage of the still weather. After a few hours motor-sailing this way, the 15 to 18kn of wind had veered, now coming from the SSW, with the tendency of turning more W-ly. That is the moment we have been waiting for, all the canvas could be unpacked and set, as we sail Close-Hauled on Starboard tack on a good 150º course. It didn’t take long to stop our engines after many helped with the manoeuvres.

From when we left Cape Horn behind, many albatrosses and petrels fly all around, being the most common ones the Giant petrels. Amongst them glide over the calm seas a bunch of the pretty Black-browed albatrosses, and now and then Royal albatrosses are also spotted, belonging to the family of the largest flying birds in the world. Completely dwarfed by them, several of the small Wilson Storm petrels flutter their wings over the sea surface. What they lack in size is largely exceeded by their brave character that takes them to fly far from any land along the Southern Ocean.