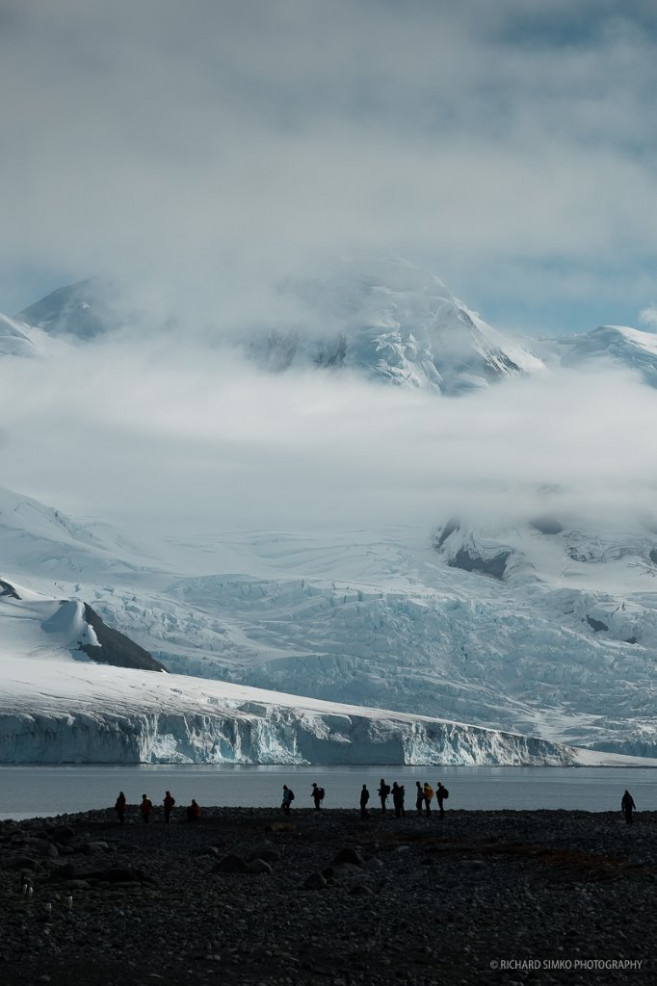 The last bit of the Drake and the discovery of Terra Australis  Incognita, the unknown southern continent.

The last day on the Drake was just as nice as the others – next to the term ´Dream drake´ deckhand Brian came up with the term `Trade Drake` - as we adjusted the sails only very little during our crossing and basically went straight to Antarctica. During our meeting yesterday evening we had but a 70 nm left and Captain Janke announced that sea watches would finish at midnight – which as always was received with laughter and joy, loud exclamations of relief and an overall excitement. Sometimes we wonder what our voyage crew expected – wasn´t night watches what they signed up for? - but we also know that after all these night watches will be remembered as something very special and forever be the basis for a good conversation.

And so the night came and the sails came down and we came closer and closer. But what were we actually coming closer to? It was foggy – no icebergs insight – no land – only water and fog and the rumours of a continent. We all know that Antarctica was the only continent that was postulated to exist long before it was discovered, many many centuries before. According to plain reasoning it had to exist – if the earth was as round as it was thought to be, what else could balance the known landmass in the North? What else than a huge landmass in the South? It even had a name long before it was first sighted in 1820 – that name had to be the total opposite of the know land in the North, the land under the constellation of Arktos : Antarktikos.

Good, so we know it exist, we have known it for thousanGreenwichs even though it was first sighted 200 years ago. We know it exist and we know we are there but we can not see it. We don´t see this big rock, the Watchkeeper, the rock that welcomes us to the South shetlands. We see her on the map and we see her on the radar – but we do not see as far as the 400 meters we have to see. Is there land, are we surrounded by land or is it a myth after all?

In the early morning we are sailing between Robert Island and Livingston island. There is no longer doubt, there must be land, we can smell it. This smell can not be anything but land. And wildlife. It can’t be anything else, we insist. And suddenly – at 07:32 – as we round the SE corner of Greenwhich island – the fog lifts. There it is. All of it. Mountains, glaciers, snow, Humpback whales, a Minky, Chinstraps, Gentoos, a Macaroni, seals, nunataks, giant petrels, swims, whale bones, rocks, mosses, crevasses, zodiac rides, lunch on deck,  reproducing sea angels, a hike up the snow, a walk in the sun, penguin highways and ice cream as desert. Ok, not all of it at once, but all of it in one day. Our first day in Antarctica.