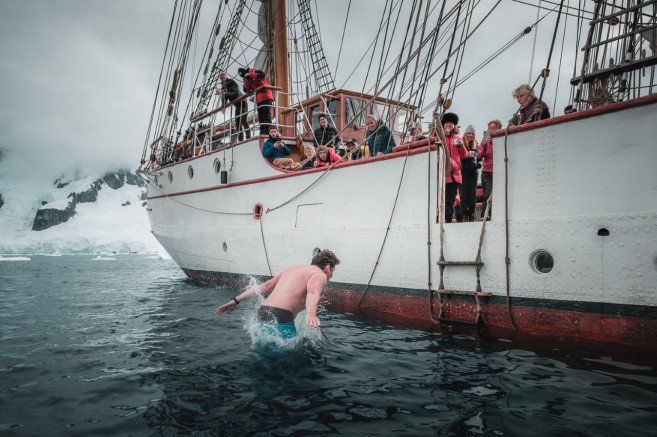 Sometimes Antarctica is not what you imagined. Snow and ice and wind and rain and cold are all understood well in advance. Three days of calm weather and bright sunshine in a row come as a surprise for most of us and as a memory it will most likely feel obviously exaggerated. But that was before and will be later – right now we are in the middle of these days – and right now they could not be more real.

These days started after we had rocked our way down from the South Shetlands and in the morning of the 17th reached our first stop between Trinity island and Spert island – which proudly carries the name ´The Iceberg Graveyard´ - as icebergs tend to get stuck here and slowly melt until they break and float on or get stuck a bit further and stay. The night had been wild, at least to our recent standards, let´s say there was a bit of movement and some headwinds, and as we arrived it was still beautifully overcast. Halfway that morning the sun came out and has not left the peninsula since. The warm weather and complete relaxation during our landing at Mikkelsen Harbour, together with the Orcas and Humpback whales we spotted soon after, made for a later arrival and hence midnight cruise in Cierva Cove – late but bright and with the sun just below the horizon the light could not be more beautiful. The day after we continued South with plenty of time to watch the high peaks and steep glaciers of the peninsula, as we were making our way under sail. An evening landing at Orne Harbour, a whole night drifting between icebergs without actually moving so much, more Orcas in the morning, a warm sunny sweaty hike up Danco island and an afternoon cruising in Paradise Bay. Where else than Paradise – so precisely named by the whalers that often would find shelter here, surrounded by glaciers. Where else could we have been to finish this day – and what else could we have finished it with - but a proper polar plunge? Just before dinner over  20 %  off our voyage crew jumped in the icy waters. The amount of sun these days is overwhelming – and so is the amount of swims. Not a single landing has passed without at least one person swimming – even on days we had 3 landings.

Calm, warm, full and overwhelming, that is how our days down South are at the moment. The only problem we seem to have is to find enough sleep – and to wake up for these extremely early breakfasts that only last until 8. To call that a problem would be a bit over the top.