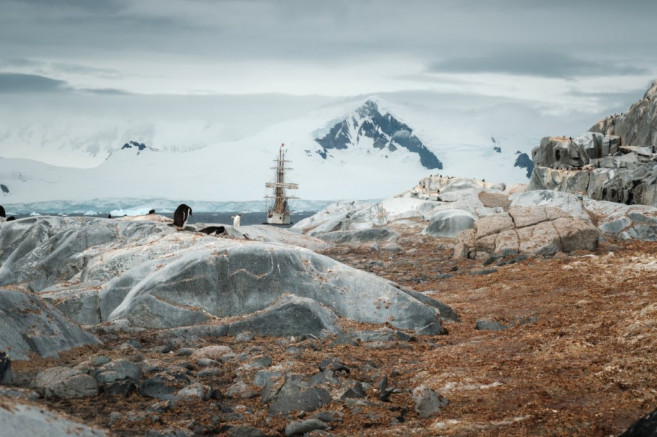 During our last two days at the peninsula we have been exploring a little – not only places but also new types of weather. On the morning of the 22th we woke up North of Lemaire – it was a bit windy, snowing and not entirely calm. We spent the morning in Hidden Bay -  a bay, as the name suggest, hidden behind some islands. Glaciers coming down on all sides, their tops and the mountain peaks as well as Una´s tits hidden in the fog.

The morning after hidden bay we were bound for Useful Island. Early morning it was windy and snowy – horizontal snow, wet snow, the kind of weather that has the potential to make people stay on board. It looked like today, finally, the day had come to make a proper Antarctic photo, a photo to come home with. Foggy and wet, as if we were enduring a thing or another. Already by the end of the morning meeting, before we even had put on our life vest, the sky had cleared, the mountains appeared and we could start a perfectly calm zodiac ride to Useful island. Once on shore the name became more and more of a mystery to us. Useful, Useful ..  maybe all this guano was considered Useful in the old times? Guano everywhere – thick layers of almost mud-like guano that would stick on our boots and creep up our waterproof pants as we walked – not a bit, completely. The combination of guano coated shoes and glacier polished rocks made for a slippery walk up the island – slippery and beautiful, definitely different from anything we had seen before. Antarctica is one enormous wilderness – but as more and more ships and more and more people visit – and some places are visited a lot – paths form and the untouched wilderness gets a touch of touch. Useful island was different. Apart from a washed up towel and a long drink type slice of lemon  – there was no sign of anyone ever having been there. Most likely it has been named Useful island as an island in the middle of the Gerlache Strait is an obviously useful navigation mark – an island in the middle of the Gerlache strait – but what the name really means – we do not know.

And so we sailed into the fjord of Answers in the afternoon. It was a quiet afternoon. We climbed up the hill, looked out over the glacier, slid down a quite steep slope, some proper sliding for sure, had a swim, observed a leopard seal catching a penguin, as the rumour goes at least, zodiaced through the most brash ice we have seen and so it was Neko Harbour that made our Peninsula part of the voyage complete.