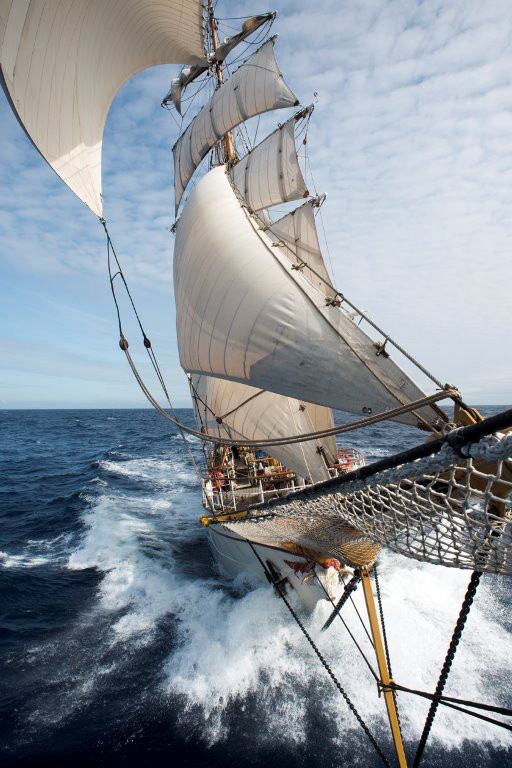 For about three days now we have been moving over the Drake as fast as we could – with the breath of the low pressure in our neck and sails, we were using all possible power to keep up the speed. And we managed, we made 203 nm in 24 hours, an amount that has to my knowledge, seldom before been mentioned in a 8 o´clocky. And not all of these miles have been helped by the  engine.

Seven minutes past five on the 26th we had made enough distance both to the North and to the West to be sure we would manage – reaching this point Janke decided to turn of the engines. Suddenly – silence. Sailing. We slowed down to about 6 knots to start with, but soon the wind picked up and we were back to 8+ knots in the right direction. As the wind increased during the night, we healed more and more, finding new positions in our bunks to prevent falling out, with more and more sails being taken down, and finally a rip in our fore course as the wind had reached 40 knots. All good, we have ripped sails before, and repaired them as well. All well, it was a bit more difficult to get in and out of harnesses and to get the midnight snack in and maybe out of us, but at least we were rounding the Horn under sail – maybe not officially, but in a way.

At 5 in the morning the famous Cape Horn was sighted – rather unexpected as the weather was moist, almost wet. We passed Cape Horn just 3,5 days after we stepped off the continent – leaving Neko Harbour 18:30 the 23th, finding lee  in the early morning of the 27th.   The Beagle welcomed us with plenty of dusky dolphins, bow riding, leaping up out of the water, it welcomed us with green slopes and a warm breeze. The wind was still strong, blowing against us, but as we had reached the protection of land, the rolling had stopped and slowly all of us who had been fighting seasickness appeared on deck with a careful smile. We stayed on deck, in the mast, on the bowsprit, enjoyed the olives and cheese Colette had prepared for us, enjoyed the promise of a full night sleep, enjoyed the thought of what is waiting for us tomorrow. Not heading straight to Ushuaia no, this low pressure system did not only give us some stress, it also gave us an extra day in the Beagle, and that day we will spend in Harberton.