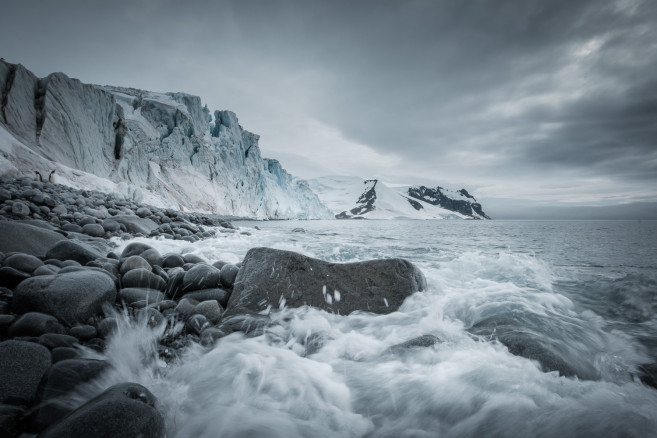 In the silence of the night, through many storms I steer; so I could light bonfires on the mountain tops.”

And thus it was that we reached beyond the southern high seas and got a 10-day glimpse of this other-worldly continent: Antarctica. We, a tiny 37 or so micro chasm of humanity out of the 7-8 billion on this Blue Planet of ours.  We came, we saw, we did NOT pollute !

Led by Sarah, our ever smiling, ever passionate lead guide - she who knows every object and being which have to do with ice (yes, Sarah is not only about the extreme southern latidutes, she also happens to live at 78 deg N, above the Arctic circle), along with Mafu, our wild life connoisseur and Tierra del Fuego descendant of those who were there before Argentina was Argentina; and Ricky, Europa’s photography coach par excellence, we explored many nooks and crannies of the Antarctic Peninsula.

Antarctica archipelago is teeming with wild life during the southern summer, from The Half Moon Island, the heavenly Paradise Bay, Trooz Glacier, Orne Harbor, to Neumayer Channel and many more.  And on to Vernadsky Station where the party got wild and at times, hot ! Ah, of course, enchanted penguin colonies grace the shores everywhere - those mysterious tuxedoed birds whose flightless movements on land reminded me the way my corpuscular late auntie Ashee walked !  Then they astonish the onlooker by porpoising gracefully in the frigid waters.

And then Europa porpoised back through an ever raging Drake in an unheard 3.5 days by masterfully exploiting those persistent lows with their nasty high winds. Nice going Janke, Dan and your competent able-bodied crew!

Behold, Noah is thy ship’s Captain and Mate!”

Haafez of Shiraz, 14-century Persian Poet - one of Goethe’s favorites

Mani what a wonderful time we bad in board of the EUROPA. You found the words. Think you for that. Monika

Great post Mani. Best of luck to you with the full recovery of your finger