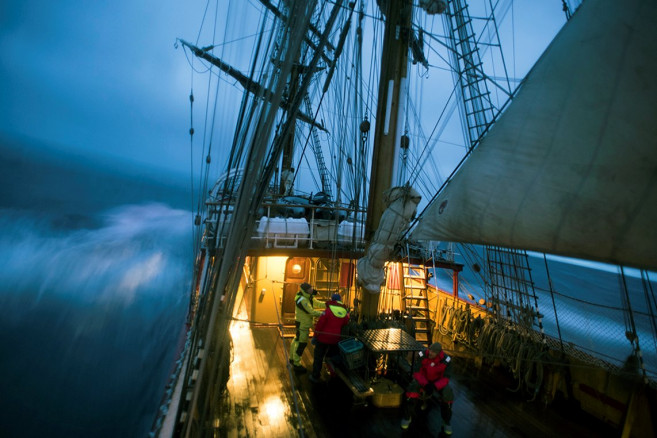 Is writing that the calm evening cruise feeling will change, like I did last time, is that tempting faith? Off course it is not. The Drake does exactly what he wants and we can not influence the weather, we can only wish and dream, but most importantly, just deal with any wind that blows our way. An old saying comes to mind, what was it again - ' you can not change the wind, you can only change the sails' ? Well, as expected, the wind has changed and we have changed our sails accordingly. All squares are away and furled, only the Spanker and the Aap are still up, and for the moment we are  powered by our underwatersails, as Captain Janke often affectionately calls our engines.

And so we are heading against the wind. The nice thing with increasing winds, even though they are headwinds, is that the birds come out, today there were plenty of Wandering and Black browed albatross around the ship, as well as Giant petrels, Wilson storm petrels and around lunchtime even some bow riding Hourglass dolphins.

We have been slowly making our way , 102 nm closer to the South Shetlands in the last 24 hours. No, that is not fast, but this time the goal is not to be fast. Going fast would get us full on into strong headwinds, and probably we would loose all the distance we had gained. So we have been going slow but steady, at the moment slow and rolling, but still in the good direction. The watches are a little lighter manned, not as light as they would have been if this would be our first day at sea though, the deckhouse is just a bit more spacious.  And after all, what is a Drake without some rolling and a bit of the tempting call for sleep as some of us dose of in the first yaws of seasickness? What is better than finding your bunk after a nightwatch and roll into a deep sleep to be woken up not by alarm clocks, no never alarm clocks, but a soft voice of one of your fellow sailors calling you for watch?