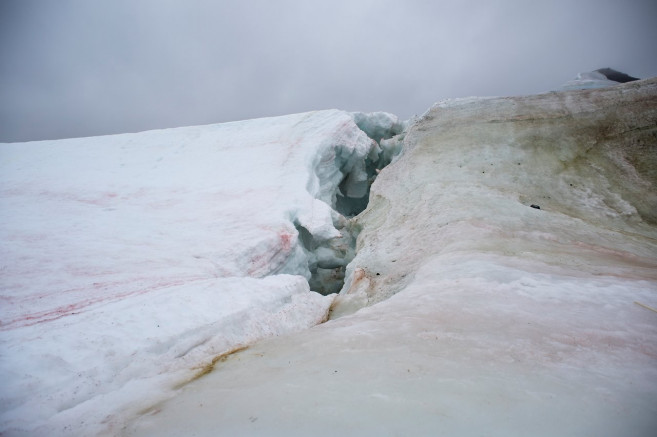 The nice thing writing a trip log is that through describing the days, everything becomes fantastic - independent from pouring rain, very strong winds, and the intense smell of the penguins. Things are exciting, never to be forgotten, a once in a lifetime experience, or truly Antarctic.

Yesterday started at Portal Point, a small area of bare rocks with the remains of a British hut, a place from where one in theory can walk to the South Pole. We were, without touching, alongside the 139 m. long wreck of whale factory ship Gouvernøren in the afternoon, and observed feeding humpback whales so very close to the ship that we could see them swim under water. In the evening we had the opportunity to set foot on the continent again.

That was at Orne Harbour, a bay with steep mountains and glaciers on all sides. You climb up the hill, all the way up, until you watch out over the Gerlache strait, with its islands you know now from the story of the Belgica, the very first ship to overwinter in the Antarctic. And all the way up there are the Chinstrap penguins – they came this way in early spring, to get to the few spots of bare rocks where they could breed. There is a constant coming and going of penguins, up and down the long highways. The bay is filled with ice, our ship suddenly small between the glaciers and the enormous icebergs. It is late summer, a lot of the snow has melted and the algae that grow under the snow have come to the surface. We are no longer in a white world, no, the snow is more colorful than one could imagine. Red and green and yellow, the ice blue, turquoise and bright.

Orne Harbour, the truth being the rain was pouring down and it must have been an extremely warm or wet or both, summer, as the snow has melted more than this ship has ever seen. The path has melted completely, there are just bare fields of ice and algae, colorful, absolutely, but impossible to walk on and as the snow is gone big crevasses are showing on the top where the ice slides down the land. There is no way we would make it up the mountain, we walk up a bit, to the first patch of bare rocks, have they ever been bare before? Somehow we struggle up, not looking up or around, just watching the boots of the person in front and continue. What did she say in the briefing, a short and easy walk up – a bit steep but not that steep, don't take your most slippery boots and you will be fine. That briefing was terribly optimistic. The rain pours down, luckily we have our sailing gear, it worked against the spray we did not have on the Drake and it works well in the rain today. We reach the patch of rocks, wet rocks, far from the top but hard enough to reach and we still have to get down somehow. As the wind picks up it gets colder and colder but still we take time to look at, what are we looking at actually? The bright colored fields of snow? It is slippery, difficult to get down, no possibility to slide, not voluntarily at least, all is wet, wet rocks hard walking, no view over de Gerlache strait, we ate too much dinner, irresistible dinner, and ice-cream just before climbing was not such a good idea, it is nine in the evening, we are hiding under our bright yellow sailing hoods and when we finally make it down to the landing site we have to wait – waiting is cold and since the wind has picked up Sarah loads the zodiacs light, so it all takes long and it is windy so we get wet not more than we were but this is salty and we had just rained all the salt out of our gear. Back on board it is almost impossible to find an empty spot on the radiator – everything is covered in wet clothes which as they dry slowly release the smell of penguins, a smell that fills the ship and follows us as we sleep.

In other words, all is well. It was fantastic, never before did we see such a colourful snow, we all managed to get up and down without big problems, seeing the Europa from above, surrounded by larger and smaller iceberg, was the cherry on the pie, the zodiac ride through the brash ice will never be forgotten, and the weather, truly Antarctic.