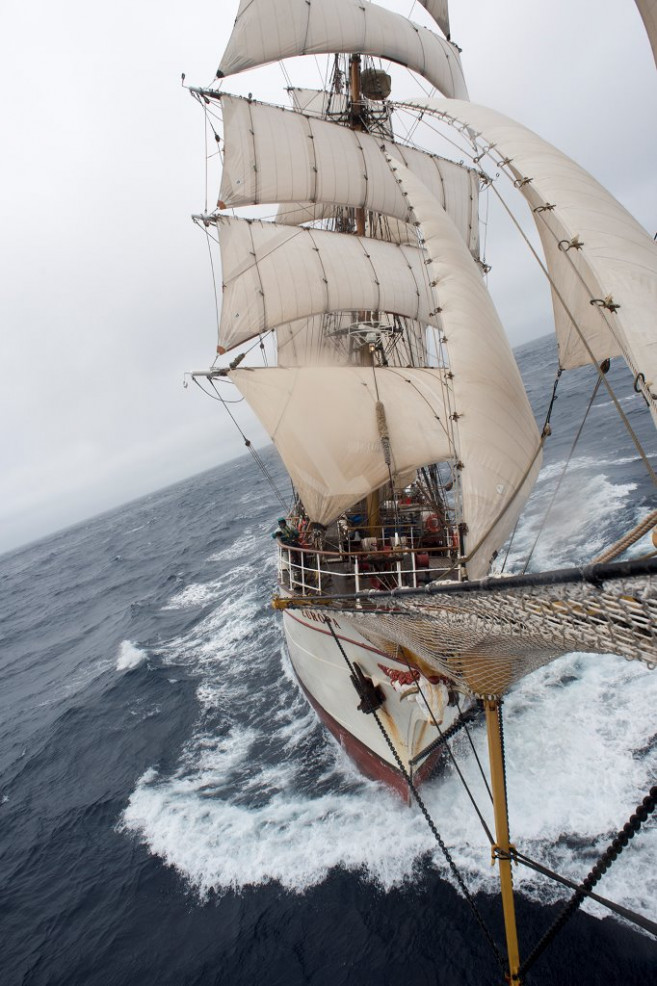 The Drake is a bit of everything this time. There are moments we are laying in the sun, out on deck, inquiring with Amelke if she has cider on board – less than twelve hours later we are healing so much all the ventilation on port side is closed so the cabins are not taking in water. From sailing with absolutely all sails up (yes including the gaff topsail) we move to motoring through almost no wind but a swell of four meters or more. In the afternoon boots are fine against the walls on one side, in the evening they are thrown around as we have suddenly started to role. On the whiteboard in the deckhouse the word 'Voluntary' in front of 'Harnesses on deck' is wiped out and written down again several times a day. A bit of rain comes by to soon clear up, staysails are passed and squares taken away but not always furled. We were short on our famous yellow buckets to start with, but by now almost everyone has gotten over seasickness and is used to the movement – or to the constant changes of movement. 3 days on the Drake we have sailed and bets have started about the first sighting of land.  And whether that land will be the famous Cape Horn.

The roughest stretch of water in the world has been more varied then rough this time. Storms are not unusual here – often low after low will pass by in rapid succession. As they approach over the oceans, not meeting land on the way, they built up until they suddenly hit Cape Horn and have to press themselves through the relatively narrow stretch between Patagonia and the South Shetlands. Winds are predominantly from the West. Together with a strong current running clockwise around the continent this makes for some challenging waters. This time however it seems we have caught a low that behaves a bit different. It moves further North than usually, and instead of experiencing the strong Westerlies the last days the wind has shifted from the North to the East to the South.  Currently our Square sails are up, we are braced square and ready, just waiting for the wind to increase so we can reach the Horn on these rare, following winds.

Michael Russo is a perfect fit for this trip I'm following you on Google maps, enjoying the logs. Be safe, have fun. Wish I was there.