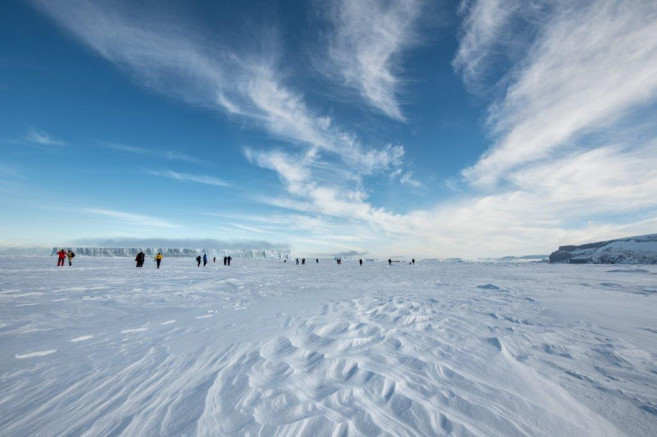 Reaching Snow Hill Island always represents a challenge due to its ice filled waters and changeable weather. The island will be the southernmost destination of our trip. One can never be sure to land
there and we just hope for the best and believe in the good fortune we had so far. However, our captain and 1st mate are very skilled in threading the ship in between the ice so when we woke up, we could enjoy the morning coffee on deck already about to drop anchor in front of the scheduled landing at Snow Hill island, close to the wooden hut built by the Nordenskjöld expedition 1901-1904. Nowadays, the hut itself is designated as a Historic site and Monument (HSM 38). It is maintained by Argentina, as they have two whole year round stations close by, Marambio on the neighbouring Seymour Island and Esperanza at the tip of the Antarctic Peninsula.

Under the early soft and warm coloured sunlight we had our usual pre-landing briefing. It was especially important today since this landing area is fairly restricted because of the historical significance
of the hut and also ongoing erosion that is happening on the hill where it stands. The weather and sea conditions for landing were perfect. A nice sunny morning followed the gorgeous sunrise, conditions that don’t happen too often on Snow Hill Island. Nevertheless, menacing fog banks started to grow over the island’s mountains and the waters between James Ross Island and Snow Hill.
A good scouting was necessary before we were called to get ready, as there was a lot of ice stranded along the beach. Tides and currents seem to pile up bergy bits and mostly blocks of multi-year sea ice over its shallows and it was important to find a safe and relatively easy accessible spot for landing. Once a suitable spot was found, we were soon setting foot amongst the maze of ice at the beach. The main goal for this visit ashore is to have a good look at the hut before climbing up to the hill next to it for a great view of the surroundings. The access to the historical hut is limited to only a few people at the time, and while taking turns for it, the rest of us enjoyed walking along the coast and in between the icebergs of various sizes and shapes. Ricky was receiving the zodiacs while Maria and Jordi went up the small hill and the hut to supervise the visit. Small groups one after the other entered the small hut, very well maintained by Argentinean Antarctic projects. Still in pretty good shape and containing original artefacts, furniture and construction, it gave us an idea how the life of Nordenskjöld, his four fellow countrymen and the Argentinean Teniente Sobral must have been during their planned first overwintering and then a second, completely unexpected, when their ship, the Antarctic, could never came back to pick them up as it sank during her attempt to sail south. In spite of that, they could find some comfort in their well-built pre-fabricated refuge, so sturdy to withstand over a hundred years and still stand on top of a slowly eroding hill in this island. For us, nice cabins, warm bunks, beautiful food, even a cozy bar, and further expectations for our ongoing Antarctic adventure for the next days, lay at anchor not so far. Even though now and then the Europa disappeared from sight due to the thickening of the fog, it is comforting to think we have such a wonderful ship and crew waiting for us at the end of our morning visit ashore. Coming and going foggy conditions offered unique opportunities to get some really moody shots of the hut and sharp rocks in the background. The little walk to the hill overlooking the hut led us to a viewpoint over the whole area, while under our feet countless fossils are scattered everywhere. Belemnites, Ammonites and different snails, amongst other species, lived here on shallow waters during Upper Cretaceous and Lower Palaeocene in a
time span comprised between approximately 90 and 60 million years ago, when Antarctica itself was located further north and still formed a single landmass with South America.

Finishing our visit we all made our way back to the beach, after Ricky cleaned the hut and left everything in order for future visitors. Down at the landingspot, soon we figured out that our original place was blocked by a chunk of ice, as with the rising tide all the icy bits and pieces get afloat once more and drift away or can change position at the shoreline. Luckily, just a few meters away there was an opening that we could use for zodiacs to come in. It required a bit of manoeuvring in between the ice but Vai and Natalie are skilled drivers and they managed it with ease. We were all back aboard the ship just in time to clean our gear, hoist the zodiacs on board and then enjoy a tasty lunch treat from our galley crew.

Soon after, anchor was hoisted and off we went amongst the drifting ice and tabular icebergs, often veiled by passing fog banks, which made for an extra careful navigation. The plans for the afternoon were to ship-cruise the spectacular coast north east of James Ross Island and explore the glaciers along this steep side of the island. However after few attempts to get there through the ice the 1st Mate Merle finally called it blocked. Having had a good look at the large sheets of multi-year sea-ice that slowly drift around during lunchtime, our guides came up with another idea: to land on one of these big flat ice shelves and have a little ice walk. It took a while to manoeuvre the ship first and then scout from the zodiac for a suitable ice floe where we could land or rather step on the floating ice safely. They also surveyed the ice shelf to determine if it was safe to walk on it. Everything seemed to be all right since they soon radioed to the ship that we can start the landing procedures. Again, we were blessed by a very nice weather, no wind and beautiful sunshine. What else could we ask for. After few rounds the zodiacs transferred everybody onto the ice shelf. What a feeling. This experience turned out to be one of the highlights of the trip and everybody greatly enjoyed it. This really felt like Antarctica during the early days of Antarctic exploration. We had this huge relatively flat ice shelf we walked on, even bigger tabular icebergs in the background, contours of nearby James Ross Island which we couldn’t get close too, rolling clouds and low lying fog in the background and of course the beautiful Europa drifting in between the ice. What a sight. We walked quite far from the edge of the shelf and it was a pure joy. A landing that most of us pictured as the “real Antarctic experience” in our dreams. As an icing on the cake we came across a Crab-eater seal, a species that we haven’t seen yet on our trip. They are by far the most abundant seal species in the world, outnumbering any other seal species. Being specialist on feeding on krill, they have uniquely shaped, sieve-like tooth structures adapted to filtering their small crustacean prey.

As much as we all enjoyed this landing, we had a limited time we could spend on the ice floe. The area of the Weddell Sea is beautiful, but also notorious for ever changing ice conditions and wind. Eric, our captain, still has to find a way out of this maze of icebergs and sea ice. It is not an easy task and for that he needs time and ideally, daylight. We left the floe to return to the ship, while she started the zig-zagging journey through the ice that eventually will bring us to Herbert Sound, the channel between Vega and James Ross Island. Increasing wind announced a hard night for the Captain and the watches, first trying to find a way between closed area by sea-ice and Tabulars and then dealing after dark with 35kn of Northerly winds, luckily now in ever more open waters.