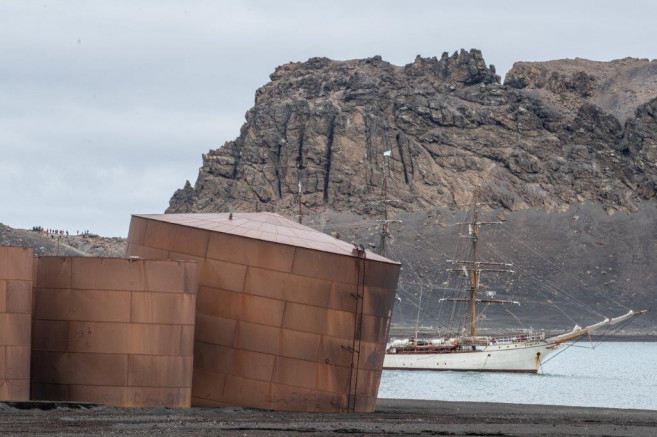 From midnight, Europa makes her way from Half Moon Island towards the famous Deception Island. Windless conditions made for motoring all the way and, as scheduled, about 07:30h we drifted for a while to have a look at the spectacular Baily Head, the East most point of Deception Island. Next to its rocky cape extends a long beach, exposed to the swells and winds of the Bransfield Strait which makes landing here impossible in many cases like today, when the surge washes high on the
shoreline. But with the ship positioned close to it, we could have a good look from our decks. Nowadays pretty well charted due to the popularity of the whole of Deception Island, it was first roughly surveyed as long ago as 1829. A more recent mapping effort was made by the Falkland Islands Dependencies Survey (the former British Antarctic Survey) during the summer 1953-54, naming the place after Francis Baily (1774-1844), English astronomer that gained his fame describing the
characteristic light-rings that occur around the sun limb during total solar eclipses, produced by the rugged topography of the lunar contour. But in another of his studies he worked on Henry Foster’s pendulum observations, some of them made on the landing site we plan for later this morning, deducing the elliptical shape of the earth. But before getting there it was worth to check the nature’s spectacle right in front of us, where a linear gravel beach stretches along most of the east side of Deception Island. A wide valley rises inland opening at its head in a sort of semi-circular natural ‘amphitheatre’. The area is bounded at its southern end by the cliffs that name the cape, while at its northern side a small glacier front covered in volcanic ash makes
a picturesque background. Along the valley runs a melt stream that is used by the large amount of Chinstrap penguins nesting here as their highway access to the coast.

An estimated number of about 80.000 couples breed here in the high season, while now we can find them moulting covering the site with their loose feathers. The ones that are ready to disappear in the water until next spring, seem to wander around up and down the beach looking not very decided to do the final step. About half an hour from there we can find the only entrance to the Deception Island caldera. A relatively narrow channel between high rust-coloured cliffs at our starboard side and gentle slopes up the hills on our port. But just half of the width of the channel can be used for navigation, as we have to leave the treacherous shallow of Ravn’s Rock close to port side to get into the wide embayment inside the island, called Port Foster. The narrow gap leading into it is known as the Neptune’s Bellows. This name was already used by American sealers
prior to 1822 because of the strong gusts often experienced in this narrow channel.

But today Europa gently motors through it under calm seas, light breeze and overcast skies. Just right around the 160m high cliffs of the northern side of the bellows, descriptively named Cathedral Crags, the remains of the Norwegian Hektor Whaling Station start to show up along the beach. With its activity as whaling base starting in 1912 and finishing in 1931, later on had passed through different uses, like being part of the “Tabarin” British Secret Military Operation during WWII, and then refurbished into a research facility by the Falkland Islands Dependencies.

Nowadays all the structures lay slowly falling apart as a witness of important episodes in the Antarctic history. The area, nested into the so called Whalers Bay, will be our visit ashore for the afternoon. For the morning, taking advantage of the falling tide, we aim for a little bay deeper into Port Foster where we are about to have a morning swim in the heated tidal shoreline along the beach of the so called Pendulum Cove. Its curious name derives from the pendulum and magnetic
observations made there by the British expedition under Foster in 1829. He was a Naval officer and scientist who sailed and made relevant scientific observations in the Arctic Antarctica. Part of his work was on surveying the coasts and trying to estimate directions and oceanographic current flows in both hemispheres. But his name was made even more famous here. At the nowadays most visited bathing beach in Antarctica, as in many other surveying points around the world, he experimented with a Kater invariable pendulum to measure the strength of the Earth's gravity. Comparing with other measurements elsewhere and with the help of other scientists of the time, it was possible to calculate that our planet is not a perfect sphere but slightly deformed, being wider at the equator than at the poles. That fact makes the gravity slightly weaker at the equatorial latitudes as the earth surface is farther from its centre.