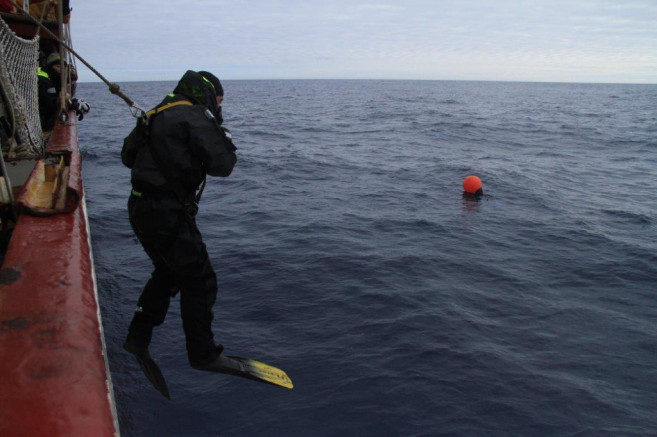 Bark Europa is a special purpose vessel or to be more specific, a sail training ship. Voyage crew is involved in day to day operations and thus there are things they have to be aware of. A man overboard situation is something that can occur on any vessel and speedy and proper reaction to such an event can be the difference between life and death. Especially in cold Antarctic waters where lifespan of the victim in the water is just a matter of minutes. After that, the victim can succumb to
hypothermia and then drowning.

As such, we have to practice to be able to do what is necessary in such a situation. Today, we had a man overboard drill just after lunch. An orange fender was used as a dummy victim. After the permanent crew handover somebody screamed “man overboard” and things were set into motion. During the man overboard situation, the most important thing is to maintain visual contact with the victim. After a few seconds the permanent crew already took over the role of the spotter. While divers
Jordi and Brian got dressed into the drysuits, the rest of the crew set up safety lines, the ship doctor with helpers quickly retrieved the first aid kit and O2 to be readily available when the victim is pulled aboard. Another important thing was to make the ship manoeuvrable as soon as possible. This is where the voyage crew could show their skills in sailhandling. In rapid succession, all the square sails were taken away by the voyage crew. While all this was happening, the officer on watch skilfully steered the ship closer to the dummy victim. With the ship close enough, Jordi jumped into the cold waters of the Drake Passage and swam towards the dummy. He retrieved it quickly and was pulled back to the ship’s side. At this point, the scenario of the drill changed. Jordi was now to play the victim and Brian who just jumped into the water was to fix Jordi onto the hoisting line using a specially made lifting sling. Once ready, he signalled the crew aboard to start heaving and in a matter of seconds Jordi was on the deck. The drill was over, or at least the action part. Now it was time for the permanent crew to
discuss the whole operation in terms of how well and how fast the crew managed to deal with the situation as well as what could be improved.

The voyage crew played a crucial part in this drill. They were the ones who spotted the “man overboard” and maintained the visual contact even after permanent crew took over. And that is a very important role, because when visual contact is lost at high seas, there is very little chance of having the victim recovered. The more eyes the better. They were also providing the hands to quickly reduce sail, with sailhandling going on all over the ship. With a regular drill like we had today we can maximise our success in this operation. We hope we never have to do it for real but it is better to be ready.