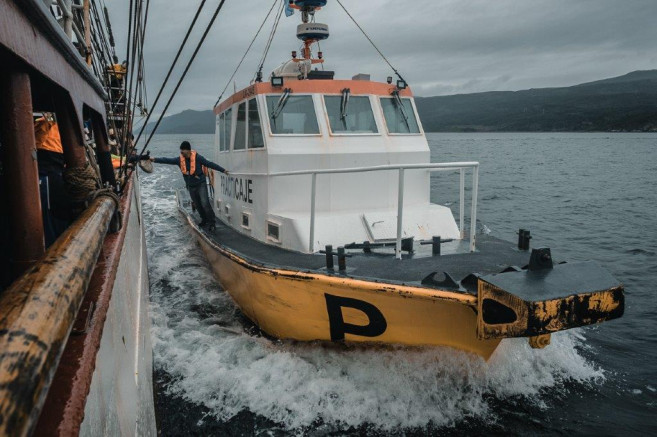 In the meantime crew members climbed the rig to unfurl the topsails to have them ready to set as soon as we can, and our first mate Merle, conducted the Safety drill, which must be done before starting the trip. By 09:00h the mooring lines were cast off. It took about 40 minutes of motoring before Lower Top Sails could be set, to help our engines on our progress under light following winds.
Motorsailing through such an interesting and distinguished area, we all could enjoy the picturesque surroundings, before starting our watch system. Even a small group of the local Peale’s dolphins joined us for a while. Common in the coastal waters of Southern South America and Falkland Islands, this species can’t be encountered anywhere else in the world. Between Giant petals, Black browed albatrosses, flocks of Sooty shearwaters, Skuas and occasionally some Magellanic penguins popping up close to the ship, the time sailing along the calm waters of the Beagle Channel was also used to get instructed for the duties we are supposed to perform on board. Directions for the lookouts and helming were completed with some rope handling lessons and afterwards the always exciting climbing aloft instructions, starting to get some practice to sail the ship all the way to Antarctica.

And indeed soon before 16:00h, after pilot Bernardo Padilla was picked up by the pilot boat “Nativa”, we set the rest of the square sails with the help of many. We tried the head sails, but with the following wind practically blowing from straight astern, they had to be stowed away again. With the engines off and taking advantage of the NW-ly breeze we steer on a course of 130 to 140º at a speed of about 5kn. Those conditions lasted until past midnight, when under the rainy weather brought by a passing by Low Pressure System, the wind backed to WSW-ly and increased to 26 to 30kn. Time for getting wet on deck and adjust sails and yards to this new situation.

Lower and middle staysails were set and, braces were set for a beam reach. The royals were clewed up and furled and we start steering on a 140º course, reaching speeds of 7 to over 8kn. Definitely we had left behind the confined waters of Southern Patagonia and we start venturing into the open seas of the Drake Passage. From this moment, over 500nm along one of the passages with worst reputation in the world lay ahead of us to reach the first destination planned for our trip, the renowned Elephant Island, on the Northeast-most corner of the South Shetland Island archipelago.