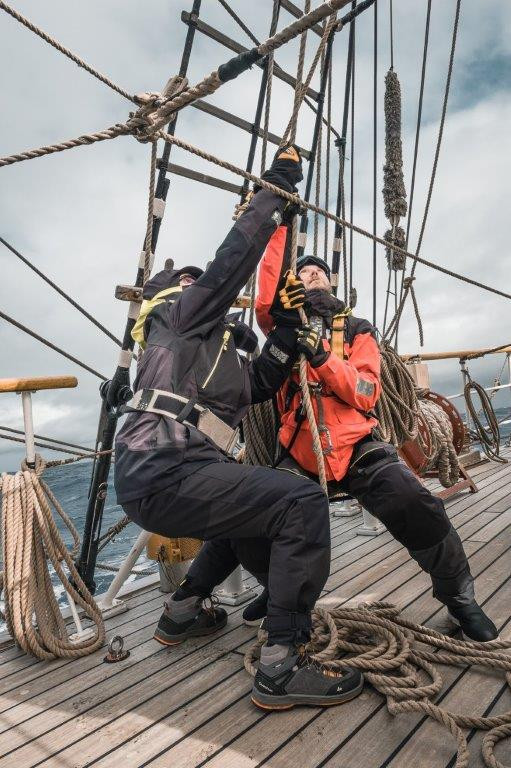 We have been enjoying great sailing conditions since leaving the Beagle Channel behind a couple of day ago, but now, the Low Pressure System that yesterday was located at our SW,  is quickly catching up with us. That brought abating winds and swells, together with calm areas where light breeze shifts are expected when its centre passes over our heads.

This started to happen later in the afternoon and evening and was forecasted to give light winds for a while. Like that, after lunch it was necessary to clew up all squares, furl the fore course and royals,
and take away staysails, while both our engines roar again, giving us speeds of 7kn, under veering light winds of 9 to 10kn. Like that, today we find ourselves half-way into the Drake Passage on
our path to Elephant Island. We have done 150nm during the last 24h, and just 215nm left to reach our first destination in the South Shetland Islands. Since we started our trip from Ushuaia, we have left behind 370nm.

Quite unexpectedly, being around the Antarctic Convergence, where mixing of water masses can produce a rich oceanographic area, not much wildlife was spotted around us. However we had a day of rare and interesting sights. Without doubt the wildlife observations that made the day for many of us were two sights of rare beaked whales. In the morning Southern bottlenose whales pop up close to the ship. With their 6 to 7m long body shape, brown colour, short beak and large prominent melon head, they made for a relatively easy identification.

Moving always around circumpolar areas in deep waters, they are probably amongst the deepest diving whales. They appear to be the most abundant beaked whale in the area and Antarctic waters, but nevertheless not much is really known about any of the beaked whale species. Like the next sighting we had, this time just after dinner: a group of what was identified after a bit of search and discussion as Gray’s beaked whales. Those are slightly smaller than the Bottlenose whales, with a size between 4.5 to 5.5m, showing a small head and a very distinctive long beak. They often breach at shallow angle, porpoising in low arc-shaped leaps, poking head above surface at 50º angle to breath.

This rare species appears to be widespread on the southern ocean, north of the Antarctic Convergence Area. As the other whales of this group they are also poorly known. We have little information about them due to scarce sightings.

Thank you for your detailed logs Jordi! Is like we see it with our own eyes!