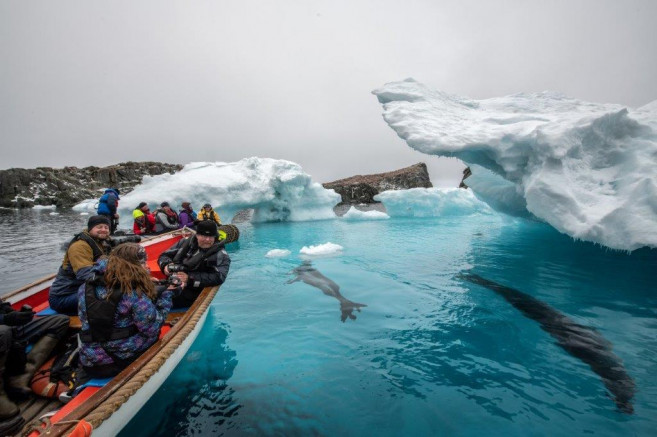 Overnight, Europa drifted on the calm waters and light breeze of the northern Weddell Sea, waiting for the first light to start the engines and make the final approach to the Danger Islands group. The starry night and clear skies at dawn were about to quickly change. When we start coming up on deck for breakfast, we are welcomed by a chilly and cloudy morning, with fog veiling the icebergs and islands at the horizon. Nevertheless the sight of countless tabular icebergs all around is impressive.

To start our activities in Antarctica we plan to land at the seldom visited and often surrounded by ice, and thus inaccessible, Heroina. Together with Darwin and Beagle represent the largest islands of the Danger archipelago. This scenic island was named after the ship Heroina, from the Argentine Antarctic Expedition during the years 1948-49, finding the place unnamed since its discovery in the mid 18-hundreds. Today we are lucky enough to find relatively easy access to its shores, making our way through numerous icebergs. It didn’t take long to realise the proximity of land. If not for the
views, just for the penetrating penguin guano smell. These desolate and remote islands are home to the largest Adélie penguin colony of the NE Antarctic peninsula. After the head count produced two years ago, when Danger Islands jumped to the mass media due to this fact, it also has been identified as an Important Bird Area by BirdLife International. Not just Adélie breed here but other species too, like Gentoo penguins, Snowy sheathbills, Giant petrels, Skuas, Wilson storm petrels, Kelp gulls and Antarctic shags. Soon after breakfast we were all ready for the zodiac shuttles ashore, to set foot on the NW corner of the Island, where a long inlet offers good chances for landing.

Ashore we are welcomed by Skuas and Snowy sheathbills feeding on dead penguins, while we walk over a thick layer of smelly penguin guano. From the several hundred thousand to even over a million Adelie penguins that crowd these islands during the high breeding season, now just a few hundred seem to be around. The rest have left land not so long ago, and now they are at sea and finishing their moulting on the ice and drifting icebergs around. Just a few decide to start on land to grow their new set of feathers, together with some late chicks. Having a closer look at those shabby moulting Adélie’s, make us wander how come Jules Dumont d’Urville ended up naming them after his wife Adele, when he first met this species in 1840. After enjoying the morning walk around on Heroina Island and having our first close encounter with the Antarctic wildlife, the afternoon brought yet another great experience: a zodiac cruise around another of the archipelago’s islets, Platter Island.

Despite its small size, it offers many things to be seen, hidden from the views from the ship, and just accessible by small boats. Secluded and shallow bays filled with small icebergs and bergy bits are
home for Weddell seal groups. At the shoreline Gentoo and Adélie penguins thrive during the breeding season, now just a small percentage of them remain, finishing their moulting and chick rearing. But undoubtedly the highlight of the afternoon cruise was to find a couple of Leopard seals, hanging around a picturesque blue iceberg that they sure consider home for the time being. Curious animals and not easily spooked, both check our boats from every angle, swimming around and under us. Beautiful and graceful seals from which we could take countless pictures framed by the large blue foot of the iceberg. But that was not all, as we witness a couple of kills while we were watching them. Inexperienced young Adélie penguins, lately fledged, have not yet achieved the skills to avoid predators or to properly feed themselves, and they wander around the shorelines looking pretty tired, hungry and confused. Excellent targets for the Leopard seal’s predatory instincts. The actual hunt can be seen in seldom lucky occasions, but today we had seen it twice. Impervious to the presence of our boats when a good change to have an easy bite arises, penguins were caught, killed and fed upon, right in front of us.

After this nature’s spectacle, we resumed our way on board and started motoring in a South-western direction. Still about 30nm separate Danger Islands from the volcanic island Paulet, where we plan to land tomorrow morning. Again we make way during the few last hours of daylight, stopping then the engines and gently drift until dawn.

Fascinating to be reading these posts every day and hoping our dear Uncle Bob Ames is having the trip of a lifetime!

Forgot to say my brother's name is Greg Muich.