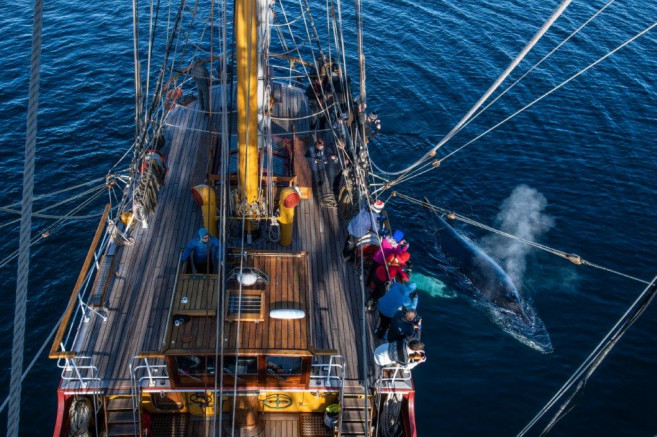 Just like yesterday, the fall of the night made us stop the ship and drift in open waters close to Paulet Island. At daybreak we started the engines and made our way to the north-eastern shores of Paulet, where we planned to land after breakfast. And indeed just by then Europa drops anchor close to the coast, under the impressive volcano that Paulet is. Its origin dates from the late Miocene geological period, just like the other similar volcanoes in the area, with its latest eruption maybe just as recently as 1850. With just a dusting of fresh snow, it is a pretty spectacular sight despite its small size, of just 1.5km across. The neighbouring Joinville, Dundee and D’Urville islands in contrast, show their surfaces completely covered by an ice sheet. Just like many other features in the area, it was James Clark Ross on his 1839-43 voyage, who found and named Paulet, honouring Captain George Paulet of the Royal Navy.Since then other many other classical and modern expeditions, scientists and tourists have visited the island, but none left such a durable historical impact as the Swedish Expedition in 1901 to 1904 did. For the following days, we will try to follow their steps here in the Weddell Sea, refraining from the episode when their ship, the Antarctic, sunk in the heavy pack ice 25 miles east of Paulet island on 12 February 1903. Otto Nordenskjöld led the famous expedition, which succeeded on building a research hut at Snowhill Island, where they overwintered. They were supposed to be picked up the following summer, but after their ship was crashed by the ice and disappeared into the waters of the channel that nowadays bears her name, a memorable struggle for survival began. It took the ship’s crew 14 days to reach Paulet safely. There, under the command of Antarctic’s Captain, the legendary Carl Anton Larsen, well known both in Antarctica and the Arctic alike, the marooned party started preparations to spend the winter. Besides hunting or gathering
as much food as they could, they set out building of a sturdy stone hut, which they insulated with penguin guano, mud, sail cloth and seal skins. We landed this morning on the beach close to it. A short walk led us to its remains, with part of the walls still standing, letting us see its structure of two different spaces. A sleeping room 7.3. x 6.7m; 2.4m high in the centre and 1.2m at the sides; and a sort of a smaller kitchen 3 x 3.7m.

Explanations followed the taking of countless pictures of such a historically relevant site, and then we all kept going on walking up a little hill from where to enjoy the views of a beautiful crater lake
just beneath us. Most probably belonging to an old volcanic event, much older than the crater at the island’s summit. Edging the lake we ascended to a saddle between hills, a privileged scenic viewpoint to both sides of the island. Below us we enjoy the views of a large flat area, a big meltwater lake and a long beach. There they went some of us, while others joined a longer hike that brought us to the top of the distinctive volcanic conical island, 353m above sea level, offering magnificent views over all the surrounding waters, islands and drifting ice.

Down at the beach, Antarctic Fur seals welcome us with their growls. Weddell seals snooze and the last Adélie penguins. Those penguins fill the coasts and hills of the island during the height of the breeding season, but now already are mostly gone from their nesting colonies. Just before reaching the landing spot again, we came across the grave of the only casualty of the Swedish Expedition, deceased during the over-wintering. He was Ole Wennersgard, aged 22. He is buried in a raised grave which now lies between penguin nests. Not so far from it a basalt stack stands, and at its background, a gentle slope climbing inland, both home for Antarctic shags and Snowy sheathbill nests. We made it back to the zodiacs and on board just in time for a well-deserved lunch. At the same time, Europa heaved anchor and started her way deeper into the Weddell Sea, with planned destination Snowhill Island where Otto Nordenskjöld and his team spent the winter in their hut, conducting scientific research and mapping efforts. With the expedition’s ship Antarctic sunk, without them knowing, they ended up being forced to overwinter for a second time. In the meantime the ship’s crew, despite being stranded at Paulet Island, sent a small party of three to try to arrive far south to Snowhill to inform the group there of the expedition’s logistic misfortunes. But not being able to complete
this mission due to drifting ice, the three men had to spend the winter in what today is known as Hope Bay, where the Argentinean Base Esperanza is located. It is quite amazing to think that this whole saga took between the years 1901 to 1904 from beginning to end, and that finally all the 3 castaway parties met again and were rescued by the Argentinean Corvette Uruguay.
We used the afternoon to make our way southwards to Snowhill Island, first through open waters, with the Erebus and Terror Gulf clear of ice. This wide stretch of usually ice filled waters was named by James Clark Ross after the two ships used on his expedition.

On our way we came across a couple of Humpback whales that made for stopping the ship while trying to have a good look at them. And indeed we had. More than us watching them, it looked like the opposite, as they got very interested in such a beautiful ship drifting in their proximity. For about 30 minutes we all enjoyed the most amazing encounter with such majestic animals. After that, they started a deep dive showing their flukes, seemingly waving us goodbye and good luck on our attempts to get further south. We didn’t have to wait too long to start dealing with quite a sudden increase in the concentration of drift ice. Multi- and single year sea ice appeared to be packed against the northern coast of James Ross Island at on Starboard-bow, trapping icebergs and large tabulars. After
a good look from aloft and a short deliberation with Captain and Mate, a relatively open passage was found on a course that, with a bit of detour, will bring us towards our destination, Snowhill Island, already visible on the horizon. Motoring this way between a maze of ice mixed with open water areas, we reach sunset time with a unique and spectacular end of the day for us,  but beginning of a couple of hours of hard work for the captain, who zigzagging the ship amongst the ice was bringing us further South in the dimming light.

At about 22:00h, being already quite close to Snowhill Island and in the dark, he decided to stop engines and drift in a relatively open water area, leaving the last remaining few miles for the early morning.