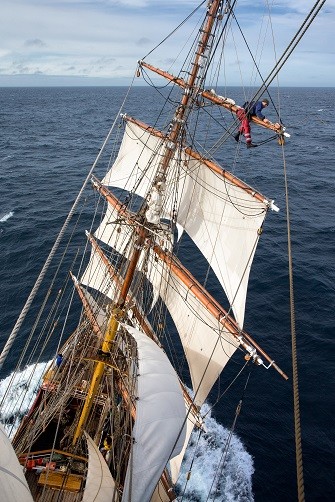 After midnight, with the beginning of the new day, wind kept veering eastwards, still blowing at around 20kn. In the dark and under light rain we brace sharper on Starboard Tack, and furl the upper staysails, keeping a 145º course and a good speed of around 8kn. We make good progress during the night and the new day welcomes us with E-ly wind over 22kn, moderate swell and cold feeling with a temperature of 4ºC. From the early hours, the water temperature also has been dropping slowly and before lunch is about 5ºC. Europa races the Drake Passage sailing Close-hauled on Starboard tack enjoying a great sailing day.

Conditions are still good enough, despite the heeling to Starboard side, to keep going with our lecture program. This morning is time for Krista to explain us the different points of sail, or how to use the different wind directions on a bark rigged ship. Afterwards Jordi talks about penguins, presenting their amazing biology, adaptations to the marine environment and for their life at sea.  This general overview is followed by an introduction to the different species that we are likely to see during our trip. Mostly the Subantarctic and north of Antarctic Peninsula Gentoos, the brave Chinstraps overlapping their distribution with the former species and reaching also higher latitudes, and the most Antarctic of them, the Adelies. During our trip, with a bit of luck and depending on the weather, sea and ice conditions, we will try to reach different spots, home for those three species. In the afternoon those talks are repeated together with Annukka lecture on Oceanography of the Southern Ocean. At lunchtime the thick cloud cover of this morning has been slowly fading away and we all welcome a temperature rise, having much clearer skies in the afternoon. Sailing Southwards, during the day we could check how the surface water temperature starts dropping. We sailed the Antarctic Convergence.

Like this we leave behind the temperate Sub-polar area and enter the cold and denser Antarctic waters that sink under the water mass from the North, producing instability and/or changes on the weather conditions. The turbulence created by the meeting of those water masses also helps to keep closer to surface the nutrients necessary for the proper growth of phytoplankton, generating a belt around Antarctica of richer waters. From a gradual decrease in the surface water temperature during yesterday until this afternoon (6.8º to 5.4ºC in 28 hours), next four hours represented a steep drop of more than 1ºC during this afternoon, and kept diminishing in the evening and night. This biological limit is never located at the same latitude, varying during the season and even changing in the timespan of days, as we talk about meeting of different water masses on a dynamic and changeable system. This steep decrease in the water temperature represents a biological boundary for many species. Sure when we get a bit more South during the next day we will start having more wildlife around, more related with the Antarctic system. For the moment we could see a couple of different bird species flying around. Several of the small and fragile looking, but really tough Wilson storm petrels are spotted while flocks of Antarctic prions join us with their characteristic fast and undulating gliding flight. In the last 24h (from 20:00h to 20:00h) we have done 182nm of great sailing, at an average speed of 7.6kn, and its just 195nm left to reach the South Shetland Islands. The wind forecast for the rest of the crossing looks pretty similar to what we are experiencing during the day, with a few degrees changing on a NE-ly direction. And indeed the wind backed from E-ly to NE-ly during the night, and we brace accordingly a bit squarer, maintaining a speed between 7 to 8kn.

I think you have noted some very interesting points , appreciate it for the post. kekacafkddackabb