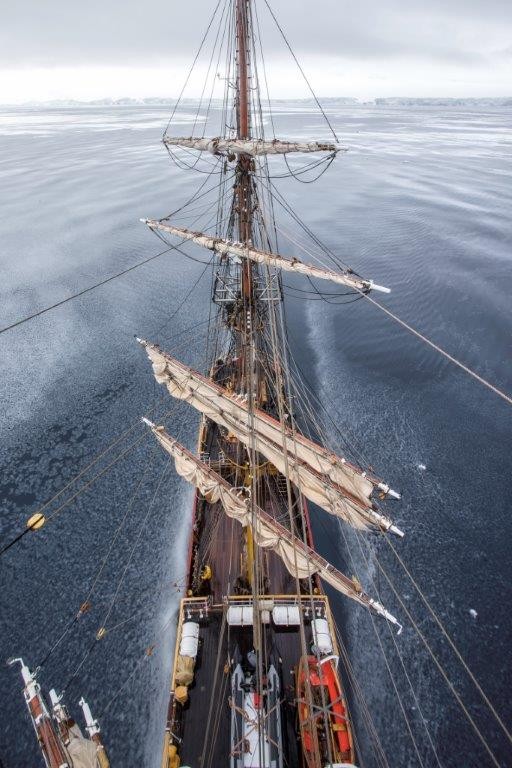 Light and variable winds in the Bransfield Strait accompanied us while motorsailing to reach the Antarctic Peninsula. With the first light of the new cloudy and foggy day, land is spotted behind towering tabular icebergs and scattered bergy bits laying at the edge of the Weddell Sea pack-ice. We were entering the 7 to 12nm wide and 30nm long channel that separates d'Urville, Joinville and Dundee islands from Trinity Peninsula, the so called Antarctic Sound.

In Hope Bay, our morning schedule plans a Station visit, now manned by Argentinean Navy and Army personnel. But engaged as they were with two of their supply vessels, they couldn’t receive us. Time to head south and get deeper into the Antarctic Sound instead. N-ly winds allow us to to set a bit of canvas, and the Top sails are clued down to help our progress towards Brown Bluff for our afternoon landfall.

Open waters ahead of us promise for a quick approach but being on one of the iciest and weather unpredictable areas elsewhere, soon before arrival to our anchorage Antarctica let us know that she guards and encloses her South polar lands under an almost impenetrable dam of pack ice. In a dynamic system such as this, the amount of sea ice varies greatly between years and also during the same season, and today a battle should be fought to reach Brown Bluff, and to get off the area later on. Many of us enjoy the spectacular ride from up the masts or out on deck, seeing ice here, there, all around, growling and roaring as Europa hull makes her way through narrow leads, until dropping anchor on a relatively more open area, close to the mighty cliffs of Brown Bluff.

Overlooking all of it, the 720m high cliffs of the reddish-brown rocks that give name to the region. The bluff, of volcanic origin, is over 3km long with an easy access to the sea in this area, that is home for Gentoo and Adelie colonies. The latter being much larger, but already deserted at this time of the year. The Gentoo youngsters still wander all around, grouping in sort of playgrounds while their parents moult looking for shelter behind rocks. Just a handful of Adelies are around, all looking pretty much ready to flee until the next nesting season. At the background the high cliffs tell the story of what is called an "englacial volcano", that made its eruptions underneath the glacier ice. Brown Bluff belongs to the James Ross Island Volcanic Group, ranging in age from Miocene to recent times, which means it was possible formed in a time span between about 20 million years ago and nowadays. The volcano's original diameter is thought to have been about 12-15 kilometers, and probably formed by a single event. Notwithstanding the freezing fog and low clouds, we walk around the flat area at its foot, enjoying the playful penguins and the bergy bits accumulated at the beach by the tides and winds. We walk around big boulders fallen from the cliffs, sculptured on odd shapes by the volcanic sand driven by the strong winds that characterize most of the days on that areas.

A group of us preferred to stay around those lower slopes making their way close to the glacier front that dominates the Southern part of the landing, while the others climbed over the loose rocks of its moraine towards the base of the orange cliff. There, several layers of pillow-lavas built the rocky walls, another structure that supports the idea of eruptions under pressure of cold waters or layers of ice. A steep way down lead us to set foot on the glacier itself, reaching the beach afterwards where we can spend some time looking at its calving front.

Soon the zodiacs are sent to pick us up, as we leave behind our nfirst footsteps on the Antarctic Continent itself. Our ship soon heaves anchor and starts her way northwards through the pack ice. The way further south is completely blocked by ice, sealing the entrance of the Weddell Sea until next summer.

With the wind picking up, the leads between the ice floes close rapidly, pack ice and apparently fixed icebergs sail as we do, and sharp ice-lookouts are needed to get off the icy trap. Luckily, by nightfall Europa sails freely on relatively open waters. Good strategy as during the dark hours wild N-ly winds swept across the Antarctic Sound, making our progress slow even under both of our engines. While many are indoors or in their bunks, Europa deals with a hell of a ride, northbound seeking for any open and sheltered waters close to the coasts of Joinville Island. Outside the storm rages while our Mate and Captain, together with crew and the appointed lookouts endure a hard time on deck, breathing freezing air filled with moist and snow, getting soaking wet as winds blast over 40kn. After a few hours the rough conditions abate as we drift close to Kinnes Cove, where we plan tomorrow’s morning activities.

Amongst the touristic Antarctic vessels built or refurbished by companies attracted by the flourishing of Antarctic business, Bark Europa shines as a kind of an outcast, where we can get closer feelings to the ones of the early explorers, with our joint efforts on deck contributing to sail the ship around the world, including those Antarctic icy waters.