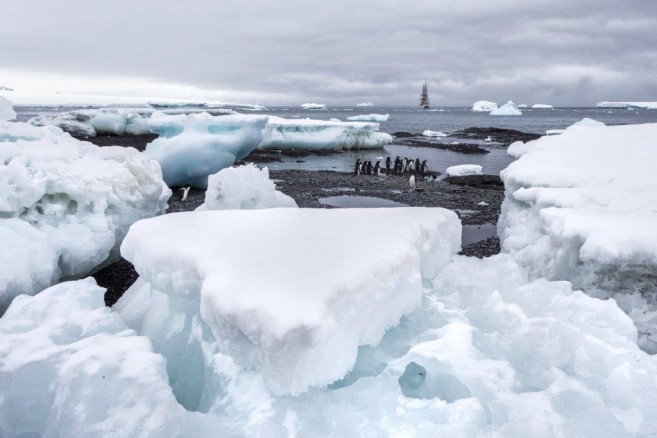 What started like a gale force windy day, ended up with a great landing at Brown Bluff in calm conditions. In the evening we enjoyed the Sinter Klaas celebration.

Europa finally rejoices a great sailing night, as we cross the Bransfield Strait. Soon after last supper, N-ly wind of about 18kn pull the ship`on a good course towards the Antarctic Sound eat 5 to 6kn. We started the night with all canvas set, but later on some adjustments had to be done, as we sail more downwind. Braces are pull squarer, Main Course is clued up and we also take away Dekzwabber, Middle and Upper Staysails.

Like this we sail on the dim light of the night. At those latitudes another surprise is the lack on actual darkness, a thing that is helping a lot in the navigation between the increasingly amount of growlers, bergy bits and much larger icebergs and tabulars.

Once crossed the Bransfield Strait, we started our way into the Antarctic Sound, escorting a solitary Minke whale that for almost two hours followed the ship. All went well until about 05:00h, when the wind quickly increased, and by breakfast time it was already blowing over 35kn. Not just the fierce blows made our progress hard, but also the cloudy and foggy atmosphere represented an added difficulty, together with the escalating number of icebergs, growlers, pack ice and huge tabular icebergs. Reduced visibility and arduous sailing conditions made for striking the canvas set. Crew spent a freezing hour up the rig furling Top Sails, Middle and Lower Staysails and Courses.

We were just facing the desolate icy West coast of Joinville Island. This is the largest island of Joinville Island group, being about 40nm long in an E-W direction and 12nm wide, lying off the NE tip of Antarctic Peninsula, from which it is separated by Antarctic Sound. Discovered and roughly charted in 1838 by a French expedition under Capt. Jules Dumont d'Urville, who named it for François Ferdinand Philippe Louis Marie, Prince de Joinville (1818-1900), the third son of the Duc d’Orléans.

As we approach, the rocky cliffs framed by glacier fronts that keep appearing and fading behind a foggy veil under snowy weather and restless strong wind, reveals as a small bay, named Kinnes Cove. Due to its rocky and deep bottom, plus the harsh weather circumstances we were enduring, the place does not invite for a safe anchorage.

Under truly Antarctic meteorological conditions and the low visibility difficulting good views of scenery, Captain decides to drift in the area facing the strong winds, waiting for an improvement on the situation. We were under the influence of a cold front passing over us, expecting to sweep fast over our heads. The strong wind was accompanied by snow fall and reduced visibility, but nevertheless the ones who ventured on deck could have a glimpse of the numerous tabular icebergs around us.

As a landing was out of question this morning, Jordi took the chance to give a talk about penguins. He explained about their adaptations to the marine environment, general biology and introduced the different species that we have chances to see during the trip or that we already have seen.

The bad weather persisted, so the decision was taken to proceed deeper into the Antarctic Sound and try our luck in another landingsite for later on. We head to Brown Bluff, also on our schedule for future days, but having good chances to land there in the afternoon we better take the chance and try a visit there today.

And so it was, getting closer to it, the weather dramatically improved and despite the overcast skies, the wind eased down, leaving behind a good afternoon for our purposes.

Brown Bluff, is located at the eastern side of the Tabarin peninsula, in the Antarctic continent itself. The glaciers that we have been seeing amongst the low clouds during the later part of the day now show their majestic appearance. After dealing with a couple of growler and iceberg bands, Europa drops anchor under the towering rust-coloured bluff flanked by vast glaciers. In front of us, a 3.2 km long beach of rock and volcanic ash, which provides adequate terrain for Adelie and Gentoo penguins to nest, as soon we could check when we landed amongst big icy chunks of pack ice stranded ashore.

We use the free roaming area moving between the two well separate rookeries from the two different species for around half an hour. Here is interesting to see the different nesting habits of both species of penguins. Gentoos use small groups scattered around the whole area, while the Adelies enjoy crowded colonies. Both are still sitting on their eggs. The beach looks quite busy with many of them jumping in and out the water, and making their way to the nests.

Afterwards, many of us joined Jordi and Belén up the moraine next to the bluff, while a few of us preferred to roam in the beach looking at the scenery and enjoying its silence.

The walk climbs the loose rocks that form the lateral moraine of the glacier draining the ice of the Northern Antarctic peninsula to the sea. The views from up there are wonderful. On one side The orange bluff that dominates the area, slopes down to the penguin crowded beach where we landed, on the other side Antarctic Sound extends at the distance, packed with icebergs and sea ice, with the mountains and ice domes covering Joinville and Durville Islands, and Rosamel, Jonassen and Andersson Island cliffs at the background.

Down below, the gentle icy slopes of the tidewater glacier end up on a rocky shoreline, and behind, its vertical glacier front calves into the ocean. We could appreciate how the unique geology of the area and the glaciological processes sculptured the landscape. Clastic volcanic boulders are scattered all around, and a bit higher up at the foot of the cliffs, we found one of the world best examples of pillow lavas. Magmatic eruptions, when the lava flows under high pressure and cold environment, come up like blobs that pile up one upon each other. This is typical condition from volcanic eruptions that happen in deep oceanic waters, or in that especially particular case, formed under the glacier ice.

A steep climb down left us on the glacier down below, first crossing what is nowadays active moraine, and then straight onto the ice until reaching its melting front. After paying a visit to the calving part of the same front, we call for the zodiacs to be picked up, while many Antarctic shags return to their nests on the rocky islets in front of us.

Back on board we enjoy another tasty dinner, and for a change of the last few days, we spent the night at anchor. The opportunity was perfect to celebrate the traditional Dutch day of Sinterklaas. The story tells that Sinterklaas was born in the year 260 AD in Patara (Turkey) and died on the 6th December 343 AD), but traditionally the gift giving, celebrations special pepernoten cookies and food, take place the day before, on the 5th of Dec.th  (actually, on board we celebrate it today because it has been our first quiet evening at anchor since that date). He lived a life dedicated to help other people, from poor persons to innocent and condemned prisoners passing through children in need. It is also believed that with his prayers on the ship bringing him back from his trip to the Holy Land he made the great winds to cease and the seas to become still. After living as a priest and bishop later on, he was made saint by the church. Thus why he is considered the Patron of children and sailors, amongst others.