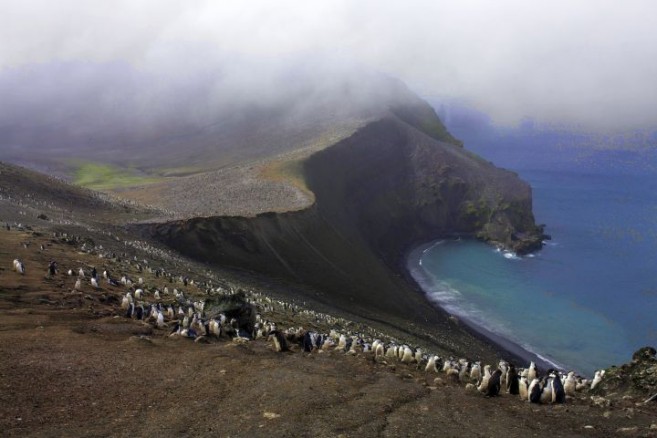 After a rough final patch of Drake passage waters helping us acutely understand the width and breadth of our bed bunks, we spotted Antarctica, or Smith island more specifically two days ago. Everyone was very excited to see land again after days on water and the frontier continent moreover. And lucky enough to have decent weather conditions for a couple of landings on shore. The night before the first landing Captain Eric got a call from a group on shore calling themselves "beach people" and keen to meet us. Much hilarity and speculation ensued: What tribe were beach people? Did they expect gifts or even a sacrifice?

Turned out they were a group of Brazilian researchers analysing fossils on the island and were greeted with hot Mate and coffee. They seemed rather glad to have some fresh human company and have the day off showing us around the beach. We spotted our first seals and penguins as well. Another two landings later in the day at Elephant and Hannah point were even richer pickings for wildlife spotting. Penguins everywhere, some of them moulting - shedding feathers and re-growing, giving them a sort of shabby chic look. Really rather adorable little "people".

What they don't tell you in the documentaries though is how pungent penguin poo smells and how hard it is to clear your rubber boots from it! The rules of landing in Antarctica specify that boots have to be perfectly clean before each landing, so the pleasure of spotting penguins has to be earned with scrubbing s... off the boots on deck with cold water. The seals were less smelly, but a bit more easily riled by visitors, at least the male fur seals. Getting a bit too close to them they were moving to attack intruders very quickly. I found out that shaking your fists above your head to seem bigger and utter a similar roar to them does the trick to make them back off.... The next day we landed on Deception island, a doughnut shaped island with an entrance and volcanic activity.

Those of us up for it did a 4-hour hike to a penguin colony on the island. Pleasant to do a longer walk on land after all this time on sea. The muddy and icy steep slopes however were a bit challenging to traverse, but everyone made it back. The rest of the group had visited the old whaling station on the landing beach. A few British navy guys were there whom Jordi eventually, with much pleasure though, had to report as they were violating environmental rules. In the afternoon we took the zodiacs to a beach with volcanic hot water underneath the sand. In pouring rain we dug holes close to the shore to allow sea and hot spring water to mix. Getting undressed in the cold air was a bit unnerving, but rolling in the sand pits like a seal rather fun. Hot showers were a hot commodity though later on and water running pretty low. After a night and morning at sea we arrived at the Antarctic mainland today.

Lots of ice bergs spotted and hunchback whales surrounding the Bark Europa early this morning. Precious sights and reason enough to brave the very cool air. We got a landing in the afternoon as well after a day sitting around and socializing in the deck house. Social life has really kicked off now that we can remember everyone's names and the bar is well visited in the evenings without watches. Claudia Roth