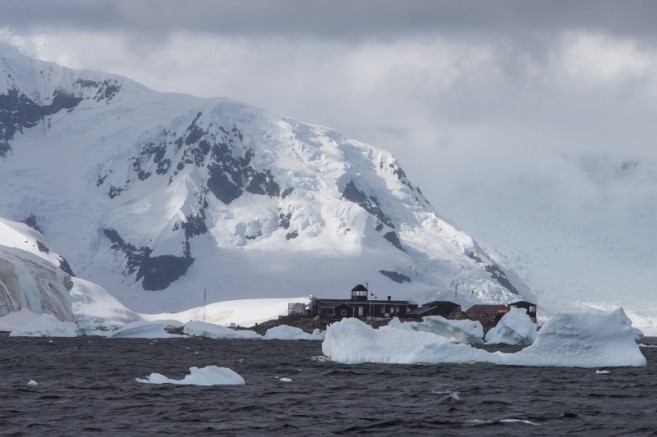 After being blown out by 46 knots of wind to the Gerlache Strait, where we drift overnight on more open and less iceberg filled waters than close to Cuverville Island, we wake up to a rainy, still windy and cloudy morning. Due to the weather situation and giving away our intended landing site to another ship whose expedition leader mis-planned their landing without time to go to a different location, our guides decide to change our morning plan and visit the Chilean Air Force-Navy Station Gonzalez Videla instead of Danco Island. Located on a wonderful spot at the entrance of Paradise Bay, the station offers shelter, sweet treats and coffee for all of us on those difficult meteorological conditions. After a windy short ride from the ship to the small jetty ashore, where the Base Commander welcomes all of us, we can enjoy the sight of a rare leucistic Gentoo penguin. This spot is traditionally used by very few of those singular light morphs during the breeding season. In addition, the Base visit also give us the chance to visit their museum, buy some Antarctic souvenirs, get a stamp on our passports and chat with the 13
friendly Chileans on duty here. Our friend Peer even got more famous as cartoonist as he makes caricatures almost all the Chileans at the Base.

The Chilean Government keep this base up and running as a logistic support for scientific projects plus as a key area for sovereignty claims over the Antarctic Peninsula. The base lays on the low westernmost termination of the peninsula between Paradise Harbour and Andvord Bay on the west coast of Graham Land. This feature has "island" characteristics, but it is only separated from the mainland at high water and is more usefully described as a "point". The Belgian Antarctic Expedition first roughly surveyed the coast in this vicinity in 1898. This point was surveyed and given this name by T.W. Bagshawe and M.C. Lester who lived here in a water boat from January 1921 until January 1922, conducting scientific projects and providing us with the first full research on Gentoo penguin ethology and breeding cycle.

After spending a couple of hours with the amiable Chilean garrison, we make our way back on board, on slightly better weather conditions, and motor amongst huge icebergs looking for a protected harbour where to spend the next hours getting the Top Sail ready to be hoisted later on in the evening. In the meantime, Jordi gives a talk about the different species of
whales that can be seen in Antarctica, explaining differences between tooth and baleen whales, their biology, habits, migrations and giving some hints of the longer talks about working with those animals. Both of our guides Jordi and Annukka are involved in different research programs on Humpback and Blue whales respectively.

Afterwards we start motoring our way into Paradise Bay where we plan to do some activities ashore and cruising in the zodiacs, after having an early dinner. Paradise is a gorgeous bay surrounded by high mountains and huge glaciers fronts, where also another Base is located. On that case belonging to Argentina and named Almirante Brown, and built in April 1951. In the beginning it was used mainly as summer station, but after 1965 it was a permanent scientific station. It was destroyed by fire, 12 Apr.1984. Almirante Brown has seen some maintenance in recent years but hasn’t been operated for a long time. Gentoo penguins have long claimed it as a favourable nesting site.

Weather has been pretty unpredictable during the whole day, with variable strong winds, and at arrival to Paradise Bay, it was blowing around 30 knots (7Bft), with drizzle and cold temperature. All in all not very inviting for the zodiac cruise planned in the evening. So the decision is taken to stick with the landing part of the plan, and soon we go ashore setting foot at the small jetty below the Almirante Brown Base. There we climbed up a snow slope to the top of the cliff known as Shag Crag, a basaltic crag (79 m high) south of Almirante Brown Station. Named after numerous blue-eyed shags nesting on its SW face. Despite the weather conditions, the top offers an outstanding lookout point over all Paradise Bay, and most of all could enjoy another slide down the slope in Antarctica.

At the end the plan to bend-on the Topsail yard didn’t work out today due to the variable wind and weather conditions, with strong gusts, snow and rain. All is ready to go, and now we just wait for good calm conditions to get the yard and its sail in place.