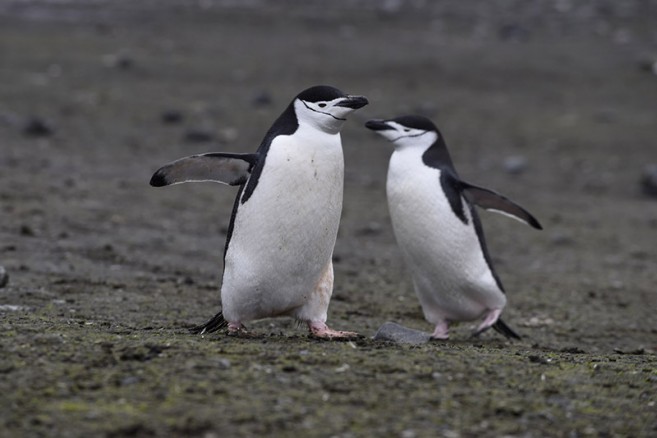 We have overcome the Westerlies and made it to the vicinity of the Antarctic Peninsula. Strange things happen here, for we have followed Plan A from yesterday’s evening update with near military precision. The snow from yesterday afternoon faded away, and the evening and early morning was clear and dry. And spectacular, with some pretty amazing icebergs which make our earlier wide eye admiration of floating ice cubes look a little naive now - how the old Antarctic hands must have chuckled. I saw an ice shelf  in the distance, only to be told there was no ice shelf in that direction for hundreds of miles. Any rational mind would agree that an iceberg could not possibly be so big, and the inescapable conclusion is that the maps are wrong. That which we have discovered what will
doubtless be called the Europa ice shelf. Our target was the Danger Isles, so called because they rise from suddenly from the seabed so soundings give no warnings. Plan A was a penguin infested landing, with possibly the odd seal or two. A recent count had the scientific community excited as it meant that they had discovered the largest colony of Adele penguins on this side of the peninsula. This got me a little concerned - if the scientists failed to notice half a million or so penguins before, how reliable is the rest of their research?
Nobody on board had every visited this place as it had always been inaccessible due to ice, particularly this early in the season. So the
best landing and the advantages and disadvantages of the various options were unknown territory for all, something which would soon become all too apparent.
The day was picture postcard perfect - blue sky, sunshine, great visibility. The temperature was above zero, and for once sunscreen was
relevant as there was actually some exposed skin to protect. Normally at this stage we turn over, bump against the side of the bed and wake up to reality, but today we were already awake. The guides roared off scouting, and eventually returned and we loaded up. The chosen minimum impact and minimum swell landing was inside an ice choked bay. The strategy for getting through this to the shore
seemed to be to use three-quarters of a tonne of inflatable rubber and human flesh against sharp blocks of floating ice. A bit of basic maths suggested several of these weighed much more than a tonne, yet somewhat improbably the Zodiacs prevailed and there were no punctures. The landing was a new strategy, stepping up from the front of the boat onto a snow ledge. A few Weddell seals watched from the ice floes as this strange, noisy and colourful wildlife arrived, then rolled over and went back to sleep. The island had Adele penguins, as expected. There was a short rise between the various rookeries, and although he tried hard, Jordi was constrained by the small size of the island and the rookeries everywhere and unable to extend the walk beyond a couple of hundred metres. As we neared the saddle Jordi gave us his deep insights on what we were seeing, based on the experience of many seasons guiding in the Antarctic: “Man, there are a LOT of penguins.” After a couple of hours we returned to the landing. Our convenient snow ledge was now a couple of metres above the waterline - the tide was going out. Oops. Doomsday scenarios came to mind - those large floating ice floes the Zodiacs had nudged out of the way would have bottomed out at formed an impenetrable wall. We could be stuck until the tide went back up again
in the evening. With a lot of penguins. Still, the sun was shining, it was (relatively) warm, and there was no wind to speak of. Things could be worse - but they could also be better. The galley was on the ship, we were on land, and lunchtime was nearly upon us.
Dan appeared with the first Zodiac - the way was clear, and the evacuation could commence. Propellers got dented on the rocky bottom, the walk to the inflatables got longer and wetter with each boat. In a light-bulb moment Sarah suddenly realised why the landing was marked on the outside rather the inside of the bay. Back on board, the galley had provided tantalising glimpses of lunch. As
we were faced once more with the need to abandon some of the Voyage Crew on a rocky island in order to keep to our schedule, we questioned again the wisdom of risking having the guides and doctor on the last Zodiac. Then came the terrible news that lunch would be delayed until everyone was on board. Suggestions were raised that maybe throwing a loaf or two of bread and a package of ham and cheese across the shallows to the castaways would fulfil the spirit of having lunch for everyone at the same time and we could get stuck into the soup and other goodies that were filling the deckhouse with fragrant aromas, but these fell on deaf ears. The last boatload arrived, with tales of wading across the shallows through waist deep water, and the bedraggled appearance to match. Only Kael was none the worse for the ordeal - the fisherman’s waders which so many had questioned as impractical and unnecessary earlier in the trip
suddenly proving their worth. She assessed the mood and jealous glares of the situation quickly and accurately. “I’m sleeping with these under my pillow tonight.”