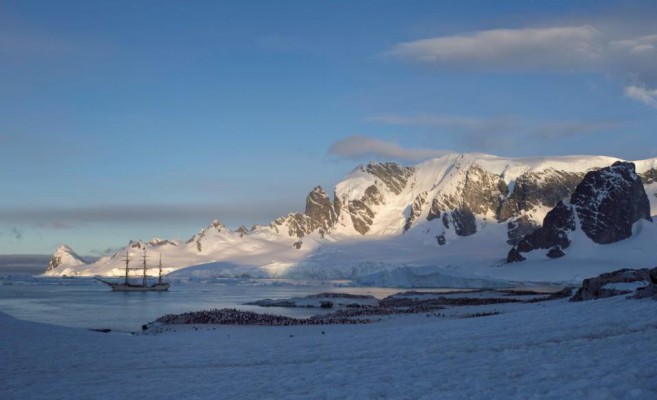 Motoring gently through the early snow and bitterly cold south westerly winds we picked our way through the apparent wall of ice into the Weddell Sea.

Within a few hours a cold front had moved through and we were treated to our first sunny day with aqua blue skies.The sun transformed the seascape, lighting the snow and bringing a blue hue to the previously inky black seas. Icebergs on the horizon standing like austere blocks of flats. Closer to Europa imaginative ice sculptures are formed by the elements. A sea dragon, a sleeping elephant and a swan. Reminiscent of a child’s game finding shapes and pictures in the clouds. As the bergs slid by excitement runs through Europa as we encounter more wild life at close quarters; feeding Humpback whales, a pod of Southern Ice Pack Type B Orca, Leopard & Weddell Seals.It was tribute to the skill of our Captain & crew that we pick our way safely through the ice maze of the Weddell Sea. As evening draws to a close we are privileged to run alongside Iceberg B15Y – at eleven miles by two this is part of the largest iceberg observed since records began in 1976.