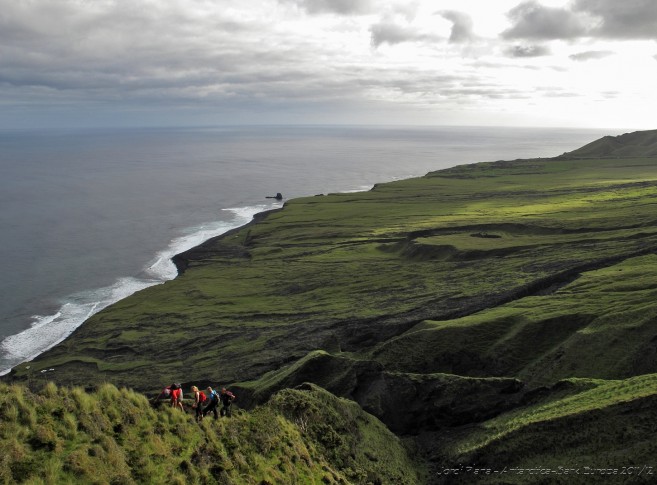 In the early hours of the new day the wind died down to around 5kn breeze from the south. The swell also follows the same tendency, becoming gentle with waves not bigger than 1.5m. We keep on a 045º course under engine, clewing up all squares and furling courses, topgallants and royals. The head rig is also stowed away, and just the middle and upper staysails are left set.

Despite the cloudy weather at dawn, the sunrays pass through several holes in the cloud cover. The atmospheric pressure kept rising and in the morning comes up to 1023 hPa. We are clearly reaching temperate areas, leaving behind the roaring forties. That can also be checked having a look at the water temperature today reaching 19º, and the air became over 15ºC. Foul weather gear and heavy clothes give way to T-shirts and some of us dare to start wearing shorts and flip-flops. The already light winds left us before lunch with the tendency to start veering north.

Motorsailing on this new 080º course the archipelago islands could already be seen when we were at around 70nm from them. Even the 2062m high Queen Mary’s Peak towers over the clouds on the horizon. Great feeling to be approaching the remotest inhabited island in the world, after 10 days at sea since our departure from South Georgia. And remote it is indeed. 1750 nm separate it from South Africa and 2088 nm from South America. This isolation makes it a special place: from the points of view of its ecology, politics and ethnography. With a bit of luck we will be able to pay a visit to the island tomorrow and see all this for ourselves. Visits and tours at Tristan are already arranged with the local tourist office and guides. Now we just hope for the best weather and swell conditions to actually allow us to land.

Eduardo gave a briefing on the history of the island, from its discovery to the present times. Tristan da Cunha archipelago was discovered in 1506 by the Portuguese Admiral Tristao da Cunha as he sailed past en route to the Cape of Good Hope. Though he never set foot on land, he brought it’s whereabouts home to Europe, and within three years they began to appear on charts, most famously in 1541 as a part of Mercator’s “World Map”. The first recorded landing was by the crew of the Dutch vessel Heemstede in 1643 that replenished their supplies with fresh water, fish, seals, and penguins. It was not until 1810 when Tristan saw the first attempt to settle down. Jonathon Lambert, from Salem, Massachusetts, led a party of three men in 1810 to establish a trading station on Tristan. Nowadays there are a classic seven surnames, descendants from different colonizers during the historical times, plus new blood and a new surname was added more recently, in 1986, when a Tristan woman married a Scotsman and the new family moved to the island.

This introductory talk was followed by an Europa Quiz for us to enjoy before joining again the watch until 24:00h. During all day numerous birds have been flying around the ship, mostly local birds from the Tristan archipelago. The most common sights of the day were the Spectacled petrels and Great shearwaters. But also several Atlantic yellow nosed albatrosses showed up. They are endemic to these islands, nesting just here and spreading over the South Atlantic ocean afterwards. It is a relative small albatross, with a wingspan up to 210cm. The golden stripe over the top bill that the adults show gives them their name. A few majestic Tristan albatrosses were gliding along the Europa as well. Belonging to the Wandering albatross group, they are endemic to Tristan Group of islands too, with a small population of around 2500 pairs.