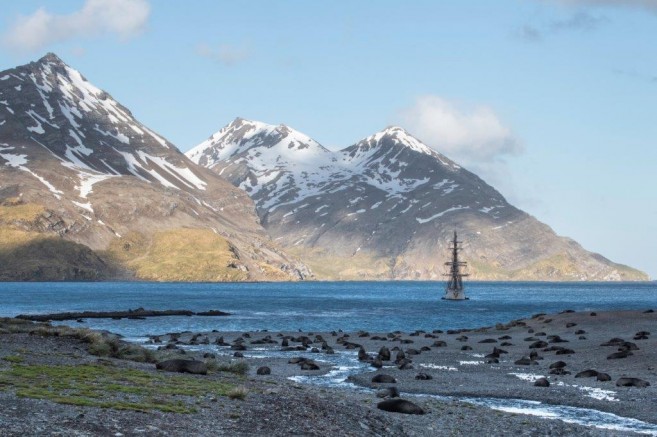 The rainy, cold and busy night on deck, ended with a windy early morning as we arrive to South Georgia. Some were awake with the first lights of the day to see the wild landscape of the island for the first time. Increasingly windy, it didn’t look very inviting for our first landfall when Europa made her way into Right Whale Bay, sailing between Nameless and Craigie Points, when she was hit by fierce gusts up to 55kn. Crew runs aloft to furl the top sails, by that time the only four pieces of canvas that still just hang on their gear. Up the rig they had to hold fast every time a gust swept over the sea surface. Soon the anchor goes down for the first time this trip, and precariously holds our position until it drags over the sandy bottom. The wind meter on the ship registered blasts of 52kn, continuously blowing and dropping afterwards. Impossible to land here, nevertheless the scenery is majestic. Sea spray fills the air in the foreground, while at the coastline heaps of Fur seals are spread all around, mingled with them countless King penguins come and go from the water to their large nesting colony that climbs up the tussock grass slopes. All framed by a waterfall dropping from the high mountains and cliffs behind, and an outwash glacial plane that stretches uphill through an ample valley. Forceful winds sweeping over the whole bay made the Europa struggle to hold her ground. In these conditions, even to try for a landing is out of question. After waiting for a while to see if conditions would improve, the decision is taken to leave the bay and make our way towards Rosita Harbour, located just a few miles away. If conditions are better there we will still have time to stretch our legs over its beaches and green hills. The dramatic and untamed scenery offered by Right Whale Bay represented a great welcome to South Georgia!
Strong winds against us for half of the way, made for a relatively late arrival to Rosita. Located on the northwest side of the Bay of Isles, this harbour doesn’t receive many visitors along the year, despite offering good anchorage, great possibilities for hikes to have a glimpse at the islands interior and lots of native wildlife. Once there, the weather seems to have improved and the bay offers enough shelter to have a try at a first landing. The area is a well-known breeding ground for Fur seals, and right from when we set our first foot ashore, we found ourselves facing big and quite aggressive males, that hold their territories desperately, waiting for more females to come ashore, to start or increase their harems. The ladies are coming back to the island pregnant from last year, and soon after arrival they give birth. A handful of those newborn pups could be seen here and there. About ten days afterwards their mothers become receptive again, a moment that the males have been eagerly waiting for. Soon they will mate with them, and afterwards they will swim to Antarctica. The mothers stay behind taking care of their pups for 3 to 4 months. Still shocked by the scene and nature’s bounty that the island represents, we start making our way, first to visit a fresh water pond where some Elephant seals are refreshing themselves, home also for a flock of the endemic South Georgia Pintails. But something else catches our eye, a crowd of quarrelling Northern giant petrels were feeding on a dead Fur seal. Displaying intimidating manners amongst them, the strongest, biggest… or hungriest amongst those large birds get a bite of the precious meat. Being the skin and fur of the seals too hard for them to easily tear, they prefer to look for natural openings or rip one open to get to the animal’s insides. A gruelling but nevertheless fascinating sight, most revealing of the behaviour of this species that until now we just have seen gliding around the ship in the open seas. A bit further on our way the scene repeats itself with another group of this birds and another dead seal. Afterwards the walk led us through the Tussock grass up gentle slopes to a couple of great viewpoints over the entire bay. There, numerous of the endemic South Georgia pipits look for nourishment amongst the tussock stools and a couple of South Georgia pintails feed on the soggy areas left by the melting snow. Descending the easy slopes we reach the bottom of the river valley.
Guided by its flowing waters we reach a larger and flat beach crowded of course by hundreds of Fur seals. From there we were picked up, not before earning our own space at the beach amongst a few troublesome seals. The night was spent on that anchorage, still enduring strong winds. When it gets dark, the crew walks around decks darkening the ship following regulations for visiting South Georgia to avoid bird strikes, as the many petrels and other species nesting in the area get attracted by the lights.