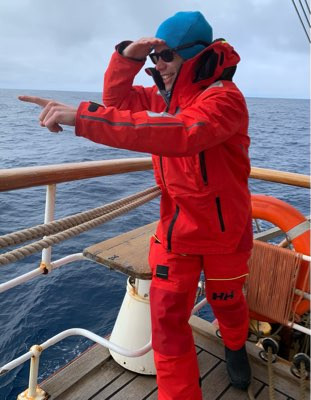 We are now well on the way back across the Drake Passage heading back to Ushuaia.

The ocean passage watch system has been back in force since 04:00 on the 14th and the team is into the swing of sleeping at odd times so that there is always someone on watch. The voyage crew is split into red, white, and blue watches and which are rotated as follows:

The two short watches in the afternoon mean that the watches rotate so everyone sees all times of the day, and there is not one watch who gets the short straw of the middle of the night every time.

The Europa team has been putting on talks for those not on watch or asleep on a variety of subjects including sail handling, the history of whaling, the geology of Antarctica, how to use a sextant, the race to the South Pole between Scott and Amundsen.

At midday on the 16th Sam successfully launched a second Argo float, after confirming with Argo HQ that it was worthwhile doing so so close to the location of the previous one.

We are now heading due North at around 8 knots, and have less than 100 miles to go to Cape Horn.