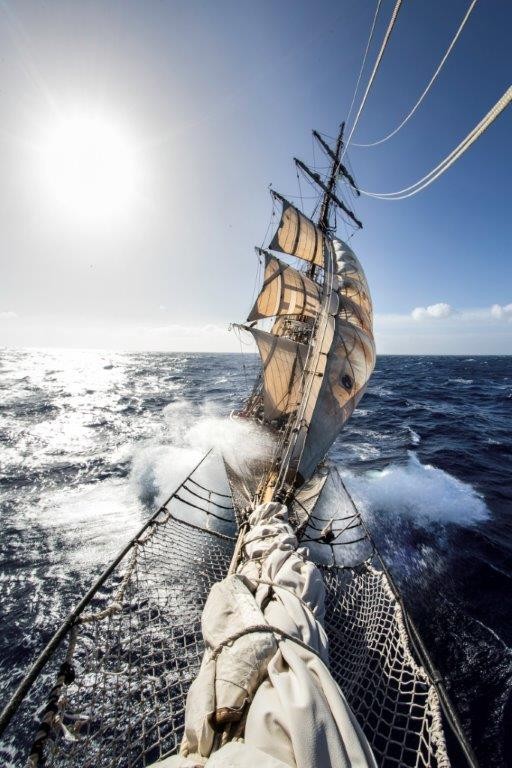 Turning around and head on a NE-ly direction for a few hours proved to be a great decision, as we linger around calm waters and light winds at the Eastern side of the southernmost tip of South America, while the stormy conditions pass by south of us. Regardless of finding ourselves weathering the storm in a quite calm area, we are not accustomed yet to the ship’s movements and seasickness strike over many of us. While many start thinking that the ride is pretty uncomfortable, we keep reminding that soon we will get use to the ship’s life and her movements, gradually developing our sea-legs.

Captain and Mate, following carefully the wind forecasts during their watches decide that in the early morning of the new day, just before 04:00h, it was time to Wear ship once more and start heading southwards. The awaiting is over and now we are ready to keep our course towards Antarctica, after avoiding to steer straight into the forecasted fearful Drake Passage storm-force winds.

Blue skies, sunshine and variable Westerly good breeze soon offers great sailing conditions, and under 20 to 25kn we hoist Top Gallants and sail south close hauled on Starboard tack, at 5 to 6kn. But the early hours just kept giving us more variable conditions, with winds dropping and increasing apparently in an erratic fashion. Frequently that is is the weather on those high latitudes around the Southern Ocean.

With the variable wind situation and swell during the journey, for many sure it could feel like quite a ride. Some got drenched out on deck and the indoor corridors start housing our wet weather gear. Luckily Europa is fitted with central heating that help to keep us warm and dry, besides many other facilities, like modern electronic nautical instrumentation and safety equipment. Despite all this, she offers a close experience with the elements of nature, in a sort of way closely related with the old days of sailing and exploration. Like when Sir Francis Drake circumnavigated the globe between 1577 and 1580, a feat that helped to have a more precise idea of the layout of lands and oceans of the planet. In a unexpected turn of events he got blown off the lands of Southern Patagonia, finding open waters south of them, thus discovering the nowadays named Drake Passage on his honor. The meeting of 3 large water masses is the distinctive feature of it. Here, South of the Cape Horn, Atlantic, Pacific and the Southern Ocean meet, all of them with their characteristic oceanic currents. The main one being the large Circumpolar current, flowing on an Easterly direction, running clockwise around the Antarctic continent, but also the Southbound Cape Horn current and the Falkland current flowing towards the North along the Argentinean coast, help to create areas of instability, represented by high seas and strong oceanic flows. The main atmospheric systems following a similar pattern, with the Drake Passage being a sort of highway for Low Pressure systems. Those usually grow in the Pacific and turning clockwise in the Southern hemisphere, swap over this area, often with tempestuous winds and raging seas. Such is the famous sea where we are now, on our crossing towards the icy shores of Antarctica that lay beyond the untrustworthy waters of the Drake Passage.

After this period of variable conditions in the early morning, the W-ly winds increase to over 35kn, time to strike some canvas. Top Gallants are clewedd up and furled, with the wind roaring through the rigging but still under sunny weather. Down below on deck waves splash against the hull, some breaking over the ship and coming over the railing, making us wet as pulling clues and boutlines.

Wind keeps pretty steady from then onwards, just with a couple of outbursts during short showers passing by in the afternoon. Outer Jib and Top Gallants join again the sail configuration once more when the wind dies in the early evening. The easing conditions reach a point when the veering light breeze becomes N-ly, and while rolling in the swell, almost all canvas is taken down, leaving just the Mizzen Top and the Fore Top Mast Staysail and Inner Jib, while we can hear the rumble of one of our engines being turned on. For a few hours during the night it will help us to keep about 4 to 5kn of speed on our southerly course, until the wind increases again, as forecasted due to another Low-Pressure system running over The Drake Passage. All an all, 400nm separate us from our destination, while after lunch we find ourselves 90nm ESE from Cape Horn.