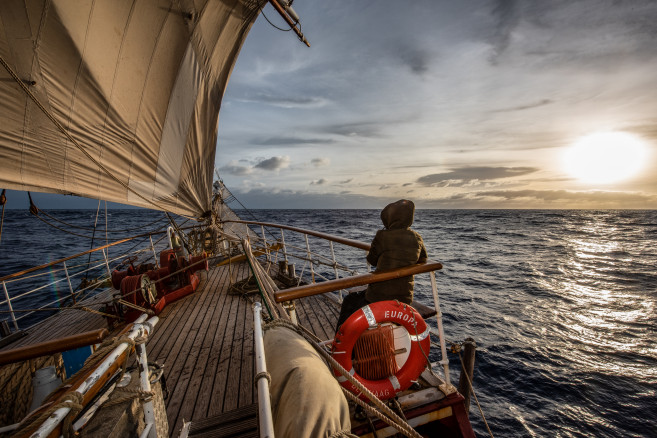 Add a trickle of water. Then a whispered buzzing sound, a silent vibration, a quiet beeping. The gadget developed to unfold some the mysteries of the ocean depths has been activated.

A slow progress over un-agitated seas allow for its deployment. Ahead lay up to four years of hard work, beating the wildest dreams of the best divers, every ten days plunging to the bottom of the oceans and surfacing loaded with valuable scientific data to send via satellite communication. Then is the turn for the researchers to interpret the measurements received. Elucidate and connect biogeochemi­cal properties of the seas to unravel the role of the oceans in transporting, storing and exchanging large amounts of heat, water masses, nutrients and gases.

A constellation of about 4000 of those so called ARGO floats wander around the world’s oceanic waters in search for this invaluable information. Roaming the seven seas like the Greek mythical ship Argo, with Jason and his crew of Argonauts, set on a quest for the precious Golden Fleece, a symbol of authority and kingship.

The Floats Program takes its name from this ancient legend, that dates at least from the 8th century BC, for the quest at sea and additionally to emphasise the complementary relationship of Argo with the “Jason satellites" launched to monitor, receive and transmit the collected data on their ten day duty cycle.

Next time the sea surface will see the gadget we deployed today, it will be right the time for the Europa to set sail Westwards on the Southern Ocean to continue her wanderings, hopefully after a successful and exciting visit to the remote island of South Georgia.

For the first time in a couple of years, she will have returned to South Georgia after a week at sea since leaving behind the Antarctic continent. Sailing under a combination of strong winds and light breezes, canvas furled, unfurled, hoisted and doused. Her braces pulled from Close Hauled in the howling gusts to Square on a dead run with the gentle puffs of air. She heeled in the storms and rolled in the calms, sailing through fair weather and freezing cold sleet sweeping over her decks.

The rigours of the Scotia Sea also take their toll on her ropes and canvas. Chafing becomes an issue on the numberless loose ropes and swaying sails while, braced almost square and following the light wind blowing from the aft, she rolls on the oceanic swells. Stitches putting canvas panels together can give up in the strong winds filling the sails or while fluttering as they are lowered.

Today’s fair, though grey and damp weather, light winds and calm seas made for inspecting, checking the rig, finding and repairing some of those issues. Time too for threading the needle and sawing palm in hand stitch in the Outer Jib, brought on deck yesterday in need of a seam mending.

Aloft, all canvas is set but the Royal Staysails on yards braced sharp on Starboard tack, trying to catch as much as possible of the SSE-ly breeze of 7 to 10kn,  trailing a good course towards destination. Later on during the day, braced squarer, on the following SSW light wind, the canvas battles and swings on the rolling ship.