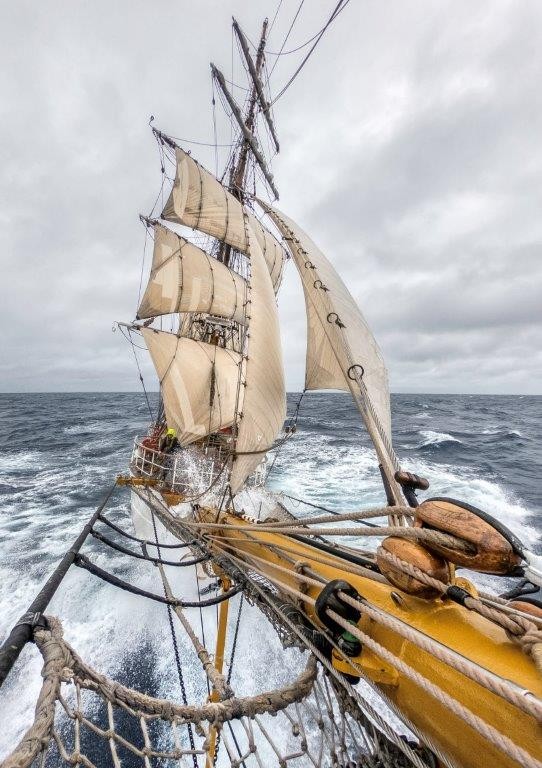 The day welcome us once more with an overcast and rainy sky, and as usually happens on the area that we are sailing, occasional squalls keep rolling over our path. Those brief but heavy showers come together with gusting variable winds as they sweep their way over the ocean. Now and then, that makes for a few minutes of difficult steering in an otherwise relatively easy watches at the wheel. Many are not yet used to the ship’s movements and seasickness, but hopefully soon will all develop good sea-legs and feel more comfortable while pitching and rolling at sea. Actually, seasickness has been thinning some of the watches, making for an extended time on deck for the people available to join the lookouts or steering the ship. After the time spent on deck enduring the harsh weather and rough seas, we are lucky to have a warm and dry ship. Europa is fitted with central heating besides many other facilities, like modern electronic nautical instrumentation and safety equipment.

Nevertheless a trip in the Europa offers a great experience closer to the nature and the weather, swells and seas, ice and storms, in a way somewhat related with the old days of sailing and early exploration. We can only agree with Roald Amundsen, the first human to reach the South Pole when he said:  "We must always remember with gratitude and admiration the first sailors who steered their vessels through storms and mists, and increased our knowledge of the lands of ice in the South.” But we have not to be just grateful for the knowledge acquired of the Antarctic shores, but also of the Southern seas, necessary passageway to reach the coveted White Continent.

Like when Sir Francis Drake circumnavigated the globe between 1577 and 1580. A feat that helped to have a more precise idea of the layout of lands and oceans of the planet. But also discovered what we nowadays know as the Drake Passage, while during his adventures, after reaching the Magellan Straits and struggle to find their way through and trying to locate good anchorages, his ship was pushed southwards by strong N-ly winds.

Quoting him:  “…6th September 1578 we entered the South Sea at the Cape or head shore. The 7th day were driven by a great storm from the entering into the South Sea, 200 leagues and odd in longitude, and one degree to the Southward of the Strait; in which height, and so many leagues to the westward… From the bay which we called Bay of Severing of Friends, we were driven
back to the southward of the Straits in 57 degrees and a tierce.” Those where previously unexplored waters, where he didn’t find any land extending South from Southern Patagonia, but an extensive ocean instead.

The Southernmost tip of the Americas still had to wait over thirty more years until Willem Schouten and Jacob Le Maire confirmed that Tierra del Fuego was an island when they discovered and rounded Cape Horn. Treacherous waters by then and still nowadays, that attract intrepid sailors from all over the world. On our way through those famously rough seas, today the Europa starts rolling over calmer and longer swells, having left behind the steep and short waves that we experienced until that moment.

The areas close to shore around the Southernmost tip of South America represent the meeting point for three large water masses that move following different circulation patterns. South of Cape Horn, Atlantic, Pacific and the Southern Ocean meet, all of them with their characteristic oceanic currents. While along the Chilean coasts the Cape Horn Current flows Southwards, the waters surrounding Southern Argentina flow towards the North in what is called the Falkland Current. All this combines with the major Antarctic Circumpolar Current running clockwise around Antarctica to create zones of high seas and strong confused flows that usually make for an uncomfortable ride.

Today, while riding those waters, we have been following the veering winds towards WSW-ly and W-ly later on, and adjusting our course accordingly to a more S-ly direction. During the morning Top Sails are clued down and we changed the small Storm-sail that yesterday substituted the ripped Dekzwabber for a larger replacement. Still motorsailing, the engines are set in lower revolutions until finally they are turned off in the afternoon when Courses were set. From then on we sail southbound at about 6kn, waiting for setting more canvas until the weather stabilizes, because up to the moment still several squalls sweep over our track. So far, during half of the day we had a great sailing, under 25 to over 30n of fair W-ly winds, that kept shifting to become W-by-N later on during the night. With those winds we can steer straight South and even slightly to the SSW, on a good course to wait for more forecasted S-ly winds and then have a better angle to steer
towards the South Shetland Islands.

I hope the weather improves, the squalls lessen and you all get over the seasickness and enjoy your amazing trip.