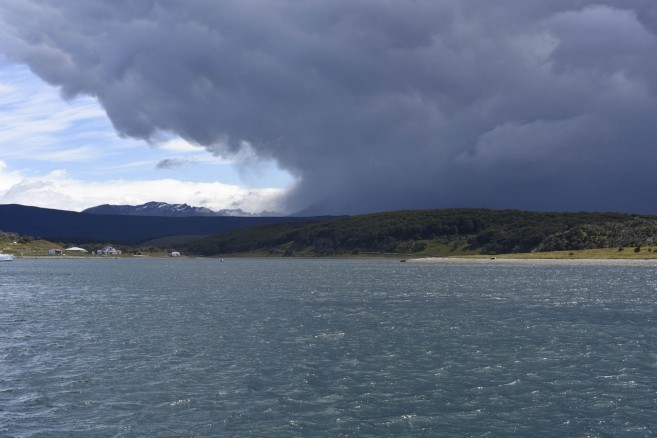 We are back in the Beagle Channel! I can't believe there are only two more nights. Life at sea is quite nice and relaxing actually. It's a rotation of watch duty, sleep, food, movies/lectures by the crew, and hanging out in the deckhouse or library editing photos. I completely lost track of the day or time, just as on the way down, due to the bizarre sleep schedules, but I don't mind. But as a result a chronological account is difficult to piece together. In no particular order:

1. Our second dog watch was the first night it got almost actually dark, and it was stunningly beautiful. The southern cross was at zenith behind us, the moon was rising through patchy clouds, and a permanent twilight/sunset/sunrise occupied the horizon. During my two hour nap beforehand, the seas had gone from fairly calm and motor-requiring to quite rough, with the swell over four meters and the ship doing more than 8 knots just on wind power. This made helming particularly fun (not sarcastically).

2. Yesterday as we approached Cape Horn (which we saw!) we were found by a school of dusky dolphins who followed us for ages and were playfully jumping way out of the water, flipping around sideways, and everything else short of juggling. They came out again when our 8pm watch started, so I did my lookout duty mostly laying on the deck with my camera over the edge.

3. The rest of that watch was taken up by taking down all the sails and removing all the safety lines and nets, which was pretty fun just by virtue of it being nice and warm again. The seas were finally calming back down again in the shelter of the islands to the west, so we were able to run around deck without harnesses and without having to wait for the ship to sway the favorable direction, a nice change of pace. I'd also just taken a new double dramamine dose and the relief from motion headaches always puts me in a great mood...

4. We came across another boat that turned out to be a solo circumnavigator. Lex called him on the radio and said he thinks he must have been sleeping, because otherwise he would have woken up and called us first, saying "Uh I seem to be lost not only in space but in time too."

5. This morning we woke up back in the Beagle Channel, and the air smells amazingly of green organic matter. I've never noticed this smell at all except in contrast to Antarctica.

6. This happened repeatedly in Antarctica too, but now more frequently in the Beagle since we're passing other ships more regularly. The Europa is the only tall ship that regularly sails to Antarctica, so other boats tend to circle us and we see the crowds lined up on deck to take our photo. We're pretty smug about how much cooler our boat is. As Ed put it, "this must be what it's like to be pretty."

8. We also saw the footage from the Amundsen expedition, and the Scott (or rather Ponting) footage that was edited into a full length documentary afterwards. It was the most British thing I've seen in a long time.

And that's all for now.