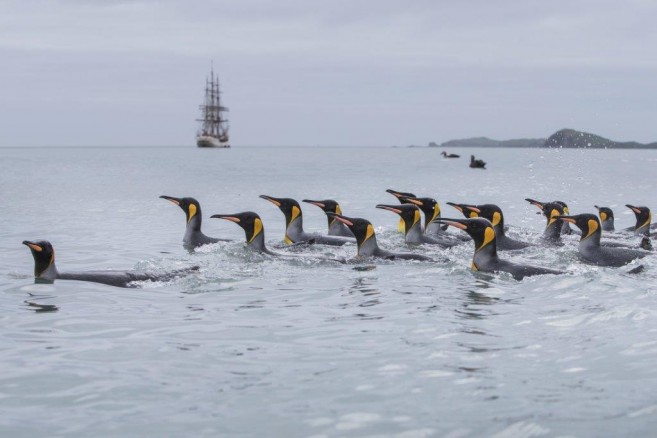 After yesterday’s unforgettable first experiences in South Georgia, today we continue with the visits to some more amazing and bountiful places of the island. And how better than trying one of the highlight landings at the island, Salisbury Plain, home of the second largest king penguin colony in South Georgia.

We already moved the ship from Rosita Harbour to Salisbury last night, trying to find a better holding ground for our anchors withstanding strong gusty winds. Along the night the winds abate, and the anchors hold tight, and by the first light of the day its calm and the seas are flat. Remarkable fact for Salisbury Plain, famous for its big swells and surge at the beach, besides for its amazing beauty. Windless conditions welcome us on deck as we woke up and check the weather. Now we can all realise the extreme and rapid changes in climatology experienced in the island in short periods of time.

In front of the anchorage, Salisbury Plain. A massive outwash flat area at the southern coast of the Bay of Isles. Framing it, Grace and Lucas glaciers, responsible for the formation and looks of the region with their retreat from the last glacial period, thousands of years ago.

The actual plane, nowadays extends for over 2 square kilometres and it is the largest levelled area in the island. It is also a favourite place for King penguins to breed. The last census counted an amount of 60.000 nesting couples, and if lucky about 200.000 penguins can be seen here, from young chicks to moulting adults. But it was not always like this, after the great experience we had in Salisbury where King penguins were everywhere as far as the eye could see, it is hard to believe that in 1912 the first estimations about the rookery counted about 350 pairs.

Once ashore, multitude of nosy Fur seal pups come and go from the water in front of us, and groups of curious penguins also interested as well on checking the visitors at their beach. For about two kilometres along the long shore at either side of the landing spot, both could be seen leaping off the swell on their trips back and forth their colonies or the seashore.

Enjoying the extensive and crowded beach, we slowly make our way towards the main penguin rookery. Once we reach it, a sea of penguins extends in front of us, with the colony spreading up the tussock grass covered hills. There they stand shoulder-to-shoulder offering an overwhelming spectacle. The first impression is of a messy colony, smelly and noisy, but after spending some time in front of it, sharing the same space, our eyes start catching more and more details. Here big chicks gather in crèches amongst many adults, there younger hatchlings try to look for warmth and shelter under their parent’s bellies. Next to them some adults lay on their egg. Far away some moulting adults gather together in quiet places around the main rookery. Many stages of their life cycle could be seen, like it happens in all colonies of this species, where they try to raise a chick twice every three years, a quite unique behaviour amongst all bird species.

Life and death could be witness revealing its continuous succession. Heaps of penguins with their youngsters naturally attract predators. And so they were all around, incessantly trying to catch a morsel. Countless Skuas keep a constant eye on what is going on inbetween the multitude of penguins, and Giant petrels are on hunting mood as well. Those, with their menacing displays, move amongst the penguins without many trouble, eventually grasping a weak or unattended chick. Then the hungriest ones or the dominant individuals fight for the catch, sort of gladiators in a circus, with thousands of penguins as usual spectators around them, and today ourselves as invited guests.

On our way back to the embarkation area, still we have some more time to enjoy the never-ending cues of penguins on their ways in and out of the rookery and surfing the swell on the beach, looking bothered by the playful seal pups swimming around and teasing each other.

Back on board many happy faces are around, after our second close encounter with the plentiful South Georgia wildlife, but this time seasoned with the innumerable integrands of a large King penguin rookery. Next stop of the day is just a handful of miles away, still inside Bay of Isles. Heaving anchor after lunch, Captain steers the ship to Prion Island. The place is home for breeding Wandering albatrosses and is actually the only colony of this species that could be visited by tourists in the whole of South Georgia. Prion Island is managed by strict regulations to ensure the least possible disturbance to these mighty birds and protect its high environmental sensitivity. One of the main characteristics of this landing is the long boardwalk that we all have to follow at all times, and that gets close to some of the albatrosses’ nests. The walkway is obvious once we land in the small cove approved for this purpose. It is again crowded with Fur seals laying amongst molting Gentoo penguins and playing around in the water. Many Giant petrels take a rest at the beach together with a few young Elephant seals also molting their fur. Soon South Georgia pipts are spotted, and flocks of Pintails fly around, as a prove that this little island has been rat-free for long. This all gives an idea of how other places in South Georgia may look if it was not because rats where having a pernicious effect on the bird populations. But nowadays after the successful Habitat Restoration projects conducted during the last years, there is hope and good indications already that endemic and native animal and plant life of the island is recovering.

The strategically designed boardwalk leads us to a first observation platform close to where an old Wanderer is sitting on its egg, a bit further up a second platform offers great views of several of them scattered all around. Many Giant petrels also share the nesting space and a sort of runway to take off and land, from atop the island.

It took a while until the Wanderers get used to us and start displaying some other behaviour than just sitting on their nests. But then some of them stood up, looking proud of showing their small chicks to the most interested of us. Others walked around saluting their neighbours, while several of them got closer flying over our heads. Beautiful Light mantled albatrosses were also soaring in the light winds over the tussock grass covered island.

Many of us were surprised to see that the albatrosses are taking care of pretty small chicks, for what it seems to us is late in the season. But we have to realise that the Wandering albatrosses have a very extended breeding cycle. They incubate their egg for around 80 days, then the long fledging period takes over 260 days. Leaving them alone, we start our way back to the landing beach, preceded by many Fur seals that seem to prefer the use of the boardwalk than the tussock grass slopes to climb up and down the island.

Afterwards, Europa heaves anchor straight away, and still with daylight make her way to a safer anchorage. Just 7nm separate Prion Island from the next bay indenting the Northeast coast of South Georgia, the so-called Possession Bay, where lays the small sheltered Prince Olav harbor, preferred place to spend part on the night. Luckily dropping anchor before dusk, we still can have a look from our decks at the remains of the whaling station and the shipwreck of the three masted Brutus. She was built in Glasgow in 1883 and spent her active time trading nitrate from Peru, until she made it here to finish her life as a coaling hulk for the whaling operations.