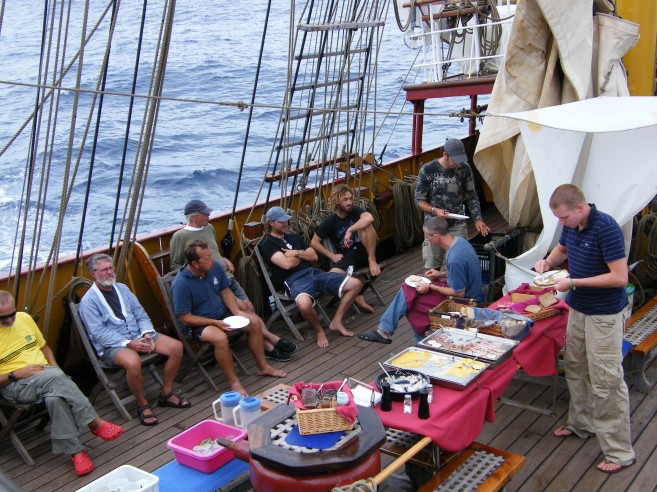 One of the important ingredients of any great voyage is food.

No matter how much the ship has rolled from side to side, the kitchen team led by the cook Eric, together with his assistants Sarah, Andy and other helpers from the crew, have been serving us three delicious meals every day. They have been even able to store some fresh fruit and vegetables until these last days when we're approaching Cape Town. The variety of tasty and healthy dishes including a well balanced menu for vegetarians, many home made food items and the friendly service have all met or exceeded our expectations.

The day starts with a breakfast buffet between 7 and 9 am, consisting of porridge, home made yoghurt, muesli, fruit pieces and fresh bread, baked every night and served with various toppings including cheese, ham, marmalade and peanut butter. Sometimes we also have eggs or other nice extras, and there's always juice, tea and coffee to drink.

At 1 pm we have lunch which includes the soup of the day, another dish and the bread buffet we're already familiar with from the breakfast. Dinner is served at 7 pm, starting with the main course and followed by a short break when everybody is eagerly looking forward to tasting the dessert of the day. During the dinner we have water, tea and coffee to drink, soft drinks, beer and wine are available at the bar at extra cost.

A couple of times a day small snacks are brought up to the deckhouse. It's best to line up to the queue rather soon to get a piece of cake or a cookie, in about ten minutes they're usually all gone. The most attractive serving of all is the fruit bowl, which appears every two or three days. Using a combination of knowledge and gentle care, the kitchen team were able to offer even soft fruit such as peaches, plums and grapes for more than a month. During the last couple of weeks, soft
fruit have largely given way to apples and oranges which keep longer, and they're not in an unlimited supply either. Nevertheless, we've had more fresh stuff than we thought when boarding the ship.

Experience from previous trips is used to estimate how much food is bought in and will be needed at any given meal. For example during the days with landings the consumption is generally higher than when at sea. And whatever is left is cleverly recycled to throw away as little as possible. Leftovers of the dinner often reappear next day at lunch, sometimes in a different form as pizza toppings or as ingredients of a dish baked in the oven. During a long trip recycling is a necessity already due to limited storage capacity, but we also appreciate the ecological aspect of using what is available and generating less waste.

Usually we eat inside, but when the sun comes out and the sea is calm enough, the lunch is served out on the deck. The photo below shows our lunch buffet a couple of days before leaving South Georgia. That was one of our favourites, featuring three refreshing salads and crunchy pizza breads.