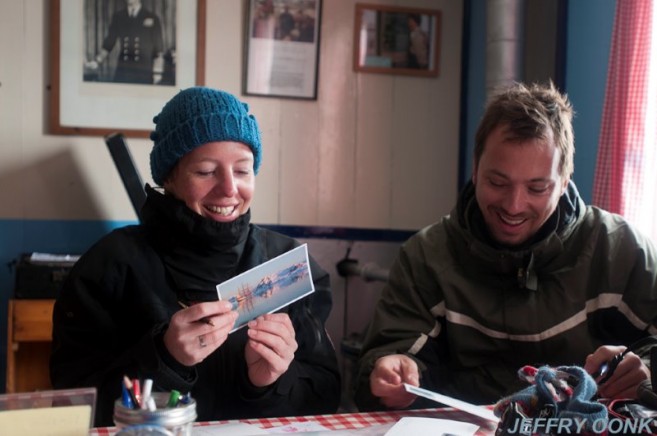 This card has to travel far, and I have no idea how long it will take to reach you.

To my beloved ones: I sent you a postcard from the bottom of the world.

This card has to travel far, and I have no idea how long it will take to reach you.

But the bearded postman promised that you would get it. Promised.

We have travelled far to sail the White Continent with Europa. In fact, if we travel any further most of us will get closer to home, instead of moving away from it.

And so we anchored, after a short night, in front of Port Lockroy this morning. Port Lockroy, an old British Research Station was established in 1944 during WWII. Before it was used during the whaling industry, being a sheltered and thus a safe harbor. The former research station is now a museum and one of the world’s southern most post offices.

It was clear; the British Antarctic Survey has put a lot of effort in the preservation of this unique building against the brutal environmental influences. The interior of the 1940 to 1960 was still intact, with a wonderful collection of scientific instruments, clothing and complete workshop.

The post office, with beautiful postcards and stamps, was manned by three cheerful girls and a young bearded man. The large kitchen table, covered with a red and white blocked tablecloth, became the most popular place in the building. All of us were writing cards. The bearded postman would stamp our cards personally, after we had dropped them in the red post-box.

The island next door, Jougla Point, had large colonies of Gentoos and bleached whalebones sticking out of the snow. But a breeding colony of Antarctic shags were the highlight of this tiny island. These blue-eyed cormorants showed elaborate courtship behaviour. And some breeding couples had even copied penguin tactics: stealing nesting material from their neighbours.

In the afternoon we left Port Lockroy behind and sailed with many sail set through the Neumayer Channel. We only did a couple of knots, but sailing through this glaciers infected strait was one of a kind. And at the moment, we are entering another magical place: Paradise Harbour. Around us, once again, black mountaintops and pure white glaciers. And we can’t get enough of it!