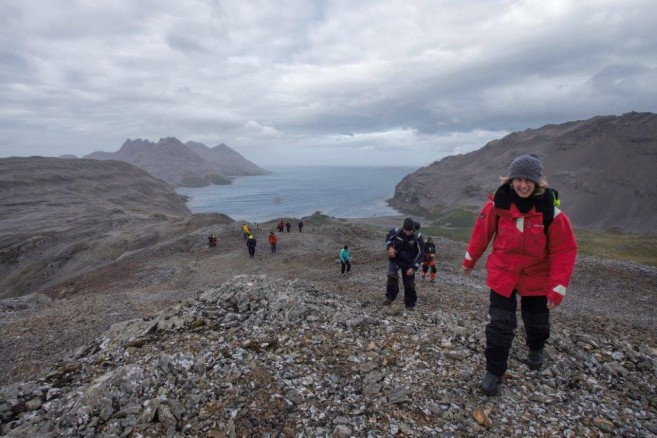 During the night we approach the Northeastern tip of South Georgia, sailing almost under full sail. Gus the Gaff Top Sail, Dekzwabber, Upper Staysails and Fore Top Mast Staysail remain furled. WNW-ly winds allow us to sail all the way along the coast, leaving at our Starboardside Williams Islands, Bird Island, Church Bay and Cape North

Just passing by that Cape is time to start striking some canvas and change course towards the shoreline, heading towards Right Whale Bay. There we plan to drop anchor and start with the landing program for the next week. But after the fair winds we had so far, as we try to get into the bay, gusting winds up to 50kn mad our engines to work hard to get us there. Luckily enough most of the canvas was already down and clued up when the blast hit us.

Soon both anchors go down for the first time since our departure from Elephant Island. The watch system is over for the moment, and just attentive anchor watches were needed. And indeed, the Europa start having some trouble to hold her ground, trying to withstand strong gusting winds coming straight from land. Captain at this point decide to drop one more shackle per anchor and like this we spend the rest of the night.

At dawn the situation didn’t show much improvement and the wind blasts continue to sweep over Right Whale Bay. With the break of the day many show up on deck to enjoy the firsts views of South Georgia and its inhabitants. For some, the view of land feels like a great relieve, and we all know it represents the beginning of a week of different activities. For the moment we start a parenthesis on the 24 hours a day sailing adventures and misadventures on the roughest waters of all, and we are ready to go ashore again over the mountains and green covered slopes. Last land we have seen a week ago was the icy Antarctica, now South Georgia, as we can see from deck this very first morning, offers a different panorama that we are ready to explore.

Europa turns heads wherever she sails, even here, where from the start of the day many Fur seal youngsters and King penguins gather around the ship to have a look at our Old Lady standing on their waters. At the background the wide open valleys of the bay, covered in Tussock grass and framed by high cliffs an mountains, nesting a large King penguin colony.

During breakfast the weather conditions didn’t improve, 45kn gusts intermittently blow over the steady 12 to 15kn of wind. The decision is taken to heave the anchors and set sail towards Rosita Bay, 20nm away. As soon as we turn the ship around and head off Right Whale Bay, Top Sails, Dekzbabber and Inner Jib are set, engines turned off and we can all enjoy a great sailing morning in South Georgia.

We make our way under sail until getting into Bay of isles, the wide inlet homing several islands, glacier fronts and the relatively sheltered Rosita Harbour. Strong winds up to 30kn still blow as we take away sails and motor our way into the bay, dropping anchor before lunch. As soon as we are spotted by Wandering, Black browed albatrosses, Giant petrels and Antarctic terns, they gather flying around the ship, and even some young South Georgia shags try their best in the strong winds to land on deck. The ship also arises the curiosity of countless Fur seals that pop up off the water next to us for a close inspection.

Strong winds in Rosita Harbour were still present but blowing more steadily between 25 to 30kn. However, with flat seas and the ship positioned close to the coast we give it a try and soon after lunch we are all ready to land. Once ashore we are welcomed by thousands of Fur seal pups, scattered around the whole beach. At the age of about three months, they are playful and curious and they don’t hesitate to approach and check us. Just sudden movements could scare them away a few metres before they stop and try again to get close to us. Between them several of their mothers could be seen, nursing their pup. The rest gather in kindergarten groups, socializing, swimming together, play fighting while waiting for their mothers to come back from the sea. Gradually the females spend more and more time feeding and on their own in offshore areas, until eventually they don’t return to the beach when they consider the pup is a grown-up seal capable for itself. Being as many as they are nowadays (as an estimate number we talk about 3 to 4 millions of them) they start having an effect on the Tussock grass itself where they love to snooze, compressing the stools with their weight, leaving the centre compacted surrounded by a crown of leaves. With the compression of the stools, burrowing birds like many petrels cannot build their nests easily.

Leaving aside the seals, Rosita is also home for one of the most interesting birds of South Georgia, the endemic Pipit. Maybe not so big and graceful like the albatrosses, but it shines as the only nesting songbird in South Georgia and due to its isolation in the island from remote times, it became a species that can only be seen here. Heavily affected by the presence of rodents, thanks to the successful rat eradication plans conducted in the island, now their population is greatly increasing.

Rosita Harbour is seldom visited for other tourist ships which they come here very occasionally but is a regular landing for the Europa. Besides doing beach-landings, our guides also enjoy exploring a bit further inland, and Rosita offers great opportunities for this purpose. Several different long hikes up the hills are possible, once everybody had enjoyed the first close encounter with the delightful and inquisitive Fur seal pups down at the beach. The place also offers one of the few sites in the island where the penguins don’t nest, and with all, gives a different perspective of South Georgia than other sites, helpful to put together a full picture of this amazing island.

Leaving the coast behind we gain some height on the mountains passing by water streams, little waterfalls, snow fields and rounded ridges, witness of the glacial past of the area, when during the last glacial period, about 15000 to 10000 years ago huge glaciers were covering Rosita. Nowadays they have retrieved far up in the mountains as could be seen once we reached the highest points of the hike. Up there, we can enjoy spectacular 360º views from Mountain scenery to the beach, while enduring strong winds. The same that keep sweeping along the bay and start playing tricks with our ship’s anchorage. Dragging anchor in several occasions over the rocky and uneven sea bottom, Europa re-positions and drops both her anchors again, while holding her ground with the help of the engine as well, against 35 to 40kn of wind, waiting for us to return.

Once on board, the Captain decides to heave anchors and try luck dropping them again at Salisbury Plain, where we plan to land tomorrow morning. Six miles away, deeper into the Bay of Isles, it offers little shelter but better holding ground and more space to maneuver.

Dropping a shackle on the anchor.Is that like a doubling up on the chain the anchor is held by to make it more secure so the chain is not lost or are you putting another anchor on the same chain to double your grip on the seabed? Also does this make it more difficult to release the anchor from the seabed while using the the sails to back off where you are anchored ? As usual great blogs for this landlubber to appreciate .Thank you. Kal..