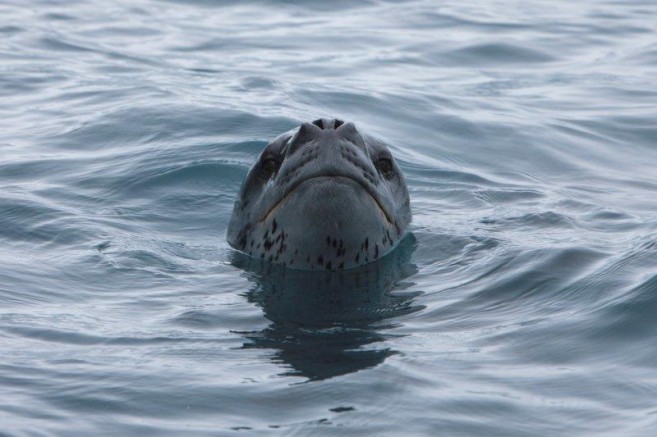 After being here a little more than a week it is already time to say goodbye to Antarctica… It started (after a fun Drake Passage) with Smith Island on 14 February. We aimed for the island but whether we would be able to land there depended on the conditions. Even with Mount Foster rising more than 2000 meters above sea level, we could only see the island when we were already quite close and because the Europa never landed there before, we sailed on towards the South Shetland Islands. Better luck next time Jordi!

Later that evening we arrived at Snow Island where we spotted some tents at President’s Head. It turned out to be 10 Brazilian scientists camping on a desolate beach for a month. They radioed the ship and called themselves the “beach people” and after being alone for 18 days they quickly invited us for coffee the next morning. They kindly welcomed us in their camp, talking about their work and showing their facilities and findings. After a cup of Brazilian coffee and shooting the first pictures of penguins and seals (many more would follow), we returned to the ship and sailed to Livingston Island. Here we did a landing at Elephant Point in the afternoon and another one a couple of miles away at Hannah Point after dinner and just before sunset.

To avoid any contaminations of future landing points, we scrub our boots clean each time we come back on board of the Europa. Luckily this also gets rid of most of the indescribable smell of penguin shit (which is everywhere you step). During the night we sailed to Deception Island where we arrived around 6.30 in the morning in the middle of the fog. Only 5 minutes later it cleared just enough to see Baily Head and the decision was made not to land there due to the wind and swell. Instead we continued through Neptune’s Bellow and anchored in Whalers Bay to go for a long (for some a bit too long) “Jordi”-hike over the mountain towards Baily Head. We just had to see it. That afternoon we went a bit further into Deception Island to visit Pendulum Cove. The beach was already steaming and digging only a couple of centimetres into the sand resulted in warm to really hot water. Some went for a swim, the rest decided the ice cold rain made it too uncomfortable. On 17 February we crossed the Bransfield Strait where we sighted the first ice bergs and arrived at Madder Cliff in the afternoon. After a short landing we stayed there at anchor for the night. The next morning both the lounge and the deckhouse were decorated with flags for my birthday.

By now we arrived at Hope Bay. Here the Argentinians run their base Esperanza. The research station was built in 1953 and houses 55 inhabitants in winter, including 10 families and 2 school teachers. It is a permanent, all year-round station, one of only two civilian settlements on Antarctica. Therefore even a mobile network was available, enabling us to phone home. After visiting the base, we headed towards Brown Bluff for the afternoon landing. Following a mild “Jordi”-hike we got dropped off by the zodiacs at an ice berg of our choice to get some nice pictures taken. After dinner Gjalt and Emma prepared a birthday cake and there were even presents. Thanks Jesse for leaving this with Annukka, we had some fun with the balloons! We started our way further south and arrived during the night at Devil Island (next to Cape Well-Met) where we did a short or longer hike with a spectacular view from the top. Looking in the direction we needed to go, the ice conditions seemed ok and during the afternoon we made our way to Snow Hill Island.

Something not many people are able to do apparently. This island also marked our southernmost point of the trip and, after a short detour and a lot of ice, we landed on Paulet Island on the 21st. After Hope Bay, Cape Well-Met and Snow Hill Island this was the last location to visit in respect of the Nordenskjöld expedition of the early 20th century. Yesterday we squeezed in a landing at Penguin Island to walk on the rim of the crater and to get trained in walking among seals. With the visit today of Elephant Island, where Shackleton’s crew stayed for 4 months waiting to be rescued, our focus is now on Ernest Shackleton. Next stop… South Georgia! Arnout