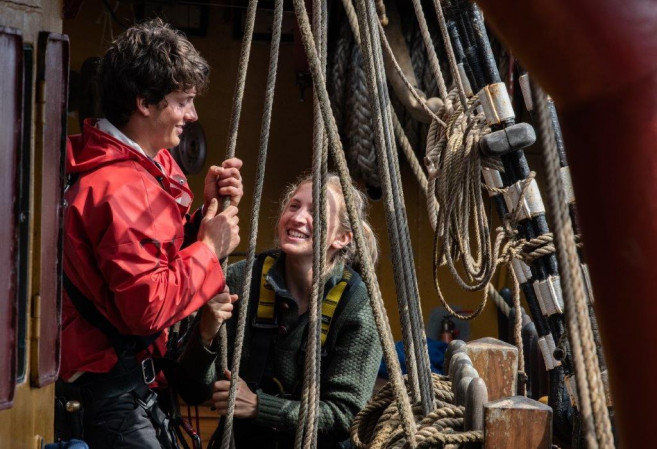 Undisturbed sea surface under foggy skies met us this morning as the daylight struggle to shine over this area of the North Sea. Unlucky calm conditions for proper sailing but nevertheless welcomed for working aloft bending-on a new Fore Lower Topsail on its yard. During those next days, plans are to replace some of the old canvas for newer sails, so far stashed in the Lower Fore-peak.

After a couple of hours aloft, the job was finished just when light breeze from the East slowly started to blow. At the same time, a couple of robust and powerful swimmers pay us a visit: White beaked dolphins, typical from the North Atlantic from cold-temperate waters to the edge of the pack ice further north, join us for a little while bow-riding the Europa.

With the wind slightly increasing, before lunch it was time for bracing sharp from square to Starboard tack and start setting Staysails and Lower Topsails, motor sailing once more for a few hours on a Northerly course. As we slowly keep sailing, below our quill now the depths steadily increase, leaving behind  the shallow waters of the North Sea. Together with that, a quick look at the electronic chart in the wheelhouse reveals that we are actually nearing the Norwegian coast, heading towards the famous and scenic Stavanger Fjord. Excitement and anticipation for the closeness of these lands made for hearing questions about how many more miles to go and when to arrive, with answers given in a most sailor way, following the old precept of sea voyaging:

"Don’t even count the number of nautical miles left to go; don’t refer to such distances in definite terms. A sailor should talk only of headings, not destinations. It’s fine to be trying to get there - he should just be aware that it’s at the discretion of the gods if he ever will."

Between bending-on sails and other maintenance projects, the crew also continues with talks and explanations, from sail training to other subjects. Today, foretelling the views of land in a short time, why not having some information about the landscapes to see and their geological origin?  The talk started by introducing geological time and different layers which Earth is separated into from the core to the crust. A basic understanding of this helped picture the processes in action billions of years ago, during the Precambrian, when the basement gneisses of Norway are dated back to. Following the description of the basement gneiss, we discussed sedimentation, volcanism, deformation and mountain building which are subsequent processes that have characterised Norway’s past.

But for the moment, it is still time to keep our track, and taking advantage of the afternoon SE-ly winds gently blowing 5 to 6 kn, all canvas is set, and we keep advancing northwards towards the land. It was not until nighttime when the engines were turned off and we could enjoy placid and silent sailing once more.

As we sail along, a few elegant Gannets fly over while the numbers of Northen fulmars sighted increase, approaching the ship and seemingly following us with their stiff flapping and gliding flight. Those birds, one of the few species belonging to the tubenose family that inhabits the northern lands (this group of birds include petrels and albatrosses, much better represented in the southern hemisphere), nest between May and September on sea cliffs of the northern seas and wander over the oceans between 40º and 80ºN latitudes.