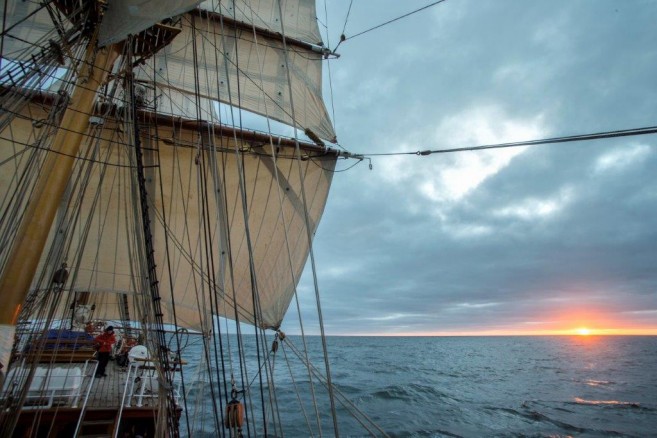 The calming winds and flattening seas allowed us for a nice sailing and to keep going with the down rigging of the gear that the Europa will not use during the Antarctic season. Like this during the morning, the Studding sails booms are removed from their yards and brought on deck to be stowed away for a few months.

The wind start backing gradually, from E-ly, more Northwards, and during almost all day blows with variable speed of 10 to 12kn from the NE. Those are the effects of being under the effects of a High Pressure System, that followed the Low Pressures that we experienced during the last days. Europa speed also fluctuates between 3.5 to 5kn under this situation.

Despite this fact our progress from noon to noon has been of a pretty good 135nm, all under sail. After lunch, the distance to cover until arriving to Falkland Islands is of barely 440nm, on a course almost Southwards.

Adapting to this winfield and sailing a bit more downwind than until now, we brace squarer and later on we strike the sails on the head rig and the Lower Staysails.

Taking advantage of the calm winds and seas, the crew practiced their skills and voyage crew as well, on a Man Over Board drill. Right after our traditional gathering after lunch with the Captain and Guides, the alarm was triggered, and we all took our positions for sailhandling on the respective masts assigned to each watch. After clueing up the Courses, Captain Klaas skilfully manoeuvred the Europa to approach the life ring used as a “victim”  and the Sloop (on that case acting as a Rescue Boat) was launched to pick it up, with the two are members Filemon and Will wearing dry suits. All an all the whole manoeuvre took around 9 minutes, not bad for our first exercise of the trip of that a characteristics.

The numerous seabirds that we met yesterday, decreased in number today. They are also affected by the decreasing winds, preferring to wait sitting in the water more often than when the winds blows harder. For the large albatrosses and petrels, gliding on strong winds does not represents a huge amount of energy used, while flapping their huge wings means spending lots of it.

Other wildlife sightings during the day were a couple of groups of Peale’s dolphins, and a couple of whales were also spotted. Their big size, round body, lack of dorsal fin and “V” shaped blow, reveal them as Southern Right Whales. Although they are pretty common in that area, this species is not regularly sighted off their traditional breeding sites on Peninsula Valdés, and their feeding grounds around Shag Rocks, between Falklands and South Georgia Islands.

The lecture and training program kept going on, and today Jordi gave a talk on the Seals of the Subantarctic and Antarctic areas, and the crew trained with setting and taking away sails, and doing walks around deck showing location and functions of the countless lines which what the Europa is equipped.

Like this we spent a quiet day at sea. Just at nightime, as forecasted, the wind picks up to between 17-18kn blowing from the NE, and as we steer on a S-ly course, our speed also increases to about 6-7kn. But sea conditions were still calm, allowing for a nice sleep and a great sailing overnight. During the dark hours the lookouts reported dolphins bow-riding the ship, a fantastic sight as those rich waters are teeming with phytoplankton, some of the species create light when they are excited by the ship passing by or the dolphins swimming. This phenomenon is called bioluminescence and always offer a magical view as the dolphins cut through the water surface creating turbulence and leaving behind a trail of light on their wake.